Millennials are Better Prepared for Retirement than Their Parents 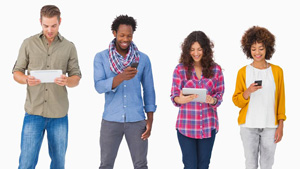 COSTA MESA, Calif., May 24, 2018 /PRNewswire/ — “Best prepared for retirement.” That’s not a superlative one might expect to describe Millennials,1 but according to the J.D. Power 2018 Group Retirement Satisfaction Study,SM released today, it’s true. Millennials are most likely of all demographic groups to have set specific retirement goals and have the highest amount of savingsârelative to ageâin group retirement plans.

The inaugural study evaluates participant satisfaction with providers of group retirement plans, such as 401(k)s, based on six factors: interaction across live and digital channels; investment and service offerings; fees and expenses; plan features; information resources; and communications. Plan providers are ranked in three categories based on their overall mix of business in terms of average plan size.

“The fact that many in the youngest generation of plan participants are actively preparing for retirement now sends a clear message to providers,” said Mike Foy, Senior Director of the Wealth Management Practice at J.D. Power. “They need to be focused on upping their game on their digital and mobile offerings to meet the expectations of this digitally engaged customer segment, not only to help differentiate themselves with plan sponsors who make provider selection decisions on behalf of the employees, but to position themselves to benefit from rollover events when employees eventually leave their jobs. With roughly $5.3 trillion in wealth currently sitting in 401(k) plans, getting the group plan participant satisfaction formula right now is crucial for the future of the wealth management industry.”

Following are some key findings of the 2018 study:

Boomers missing the mark: Nearly two-thirds (61%) of Millennials have at least $25,000 in total retirement savings, and 27% of them have more than $100,000, with an average of 30-35 years before retirement. By contrast, 75% of Boomers have more than $100,000 in savings with an average of just three years until retirement age. The average Boomer will hit age 65 with just 3.4 years of current income saved, far short of the 10 years some experts recommend.

The 2018 study is based on responses from more than 9,500 group retirement plan members. The study was fielded in February-March 2018.