Money, not pride, motivates Americaâs youngest workers, who are much more ambitious than other generations and say they want to retire early

New research from Qualtrics reveals the largest motivating factor for young workers to do their best at work is earning money, whereas older workers are more motivated by personal pride in their work. 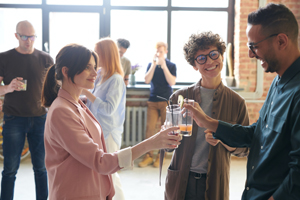 In a study of 3,000 working Americans, Qualtrics found that more than one-third (35%) of workers overall say their career ambitions decreased over the past three years. However, younger workers â Generation Z and young millennials (18-34 years old) â are growing more ambitious, with 35% reporting higher career goals than they had pre-pandemic.

Combined, Gen Z and millennials make up more than 40% of the American population1, and are a growing share of the labor force. At the same time, there were about 2 million more retirements than expected during the pandemic, concentrated among workers 65 years and older2. Gen Z and millennials place a higher priority on aligning with their employerâs values than older generations; this research highlights how the workforce culture is shifting with a new generation of workers.

Younger workers are more likely to aspire to higher job titles than older workers. A larger share of young workers want to found their own business, be part of the C-suite, and lead a full department or multiple teams than the percentage of older employees who want to hold those same positions. Just 8% of young workers want to be individual contributors and not manage others.

âThe pandemic pushed people to think differently about the role that work plays in their lives, and weâre seeing the impact of that,â said Qualtrics Chief Workplace Psychologist Dr. Benjamin Granger. âWhile itâs not surprising that growth and development are important and career ambitions change as we age or enter different stages of life, this data suggests that the levers organizations pull to attract and retain both younger and older workers may need to differ.â

The pandemic pushed people to think differently about the role that work plays in their lives, and weâre seeing the impact of that...

Motivated By A Desire To Support Their Life Outside Of Work

This career ambition may be driven by a separate goal, to enjoy their life outside of work obligations. The largest motivating factor for young workers to do their best at work is earning money, whereas older workers are more motivated by personal pride in their work.

These young workers donât plan to work until they can receive full benefits from Social Security. In fact, nearly a quarter (24%) of them plan to retire early, and 41% of those would-be early retirees want to do so by the time they turn 50. By comparison, 21% of workers between the ages of 35 and 54 plan to retire before they turn 67.

There are also limitations to how much extra work young workers are willing to take on to advance in their careers. Three-quarters of young workers say they are likely to accept a promotion with a 10% pay raise if they have to work up to five extra hours per week, but that drops to 37% who would take a similar promotion that required more than eight extra hours of work each week, while 40% of workers aged 55 and over would still take that promotion.

Qualtrics, the leader and creator of the experience management category, is changing the way organizations manage and improve the four core experiences of businessâcustomer, employee, product and brand. Over 16,750 organizations around the world use Qualtrics to listen, understand and take action on experience data (X-data™)âthe beliefs, emotions and intentions that tell you why things are happening, and what to do about it. The Qualtrics XM Platform™ is a system of action that helps businesses attract customers who stay longer and buy more, engage employees who build a positive culture, develop breakthrough products people love and build a brand people are passionate about. To learn more, please visit qualtrics.com.