The Value Of Advice 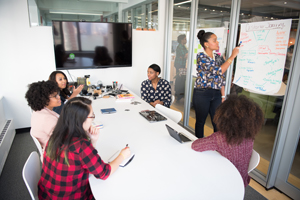 Columbus, OHâJanuary 25, 2021âAs the COVID-19 pandemic wears on, women investors are more concerned about their finances and feel less prepared than theyâve been in years. Nearly three in four (72%) women with investable assets of $100,000 or more said the pandemic has negatively impacted their ability to retire. These are among the latest findings from Nationwideâs sixth annual Advisor Authority study, powered by the Nationwide Retirement InstituteÂ®, reflecting the responses of more than 2,500 individual investors, advisors and financial professionals.

âWomen are concerned about the impact of the COVID-19 pandemic on their finances and the resulting uncertainty can make planning for the futureâand their retirementâmore difficult. For several consecutive years, our Advisor Authority study has revealed the disconnect between womenâs growing concerns about their ability to retire and their level of preparationâand the pandemic has taken this to new levels,â said Ann Bair, SVP of Marketing for Nationwide Financial. âWhile women are acutely aware of the challenges they face, itâs critical that they take steps now to address gaps in their retirement plan, especially as we start a new year.â

Given their concerns about the economy, the market and the impact of the pandemic, it follows that women investors were significantly less optimistic about their financial outlook in 2020 compared to 2019 (32% vs 56%). Likewise, men also cited a significant decline in optimism in 2020 (39% vs 53%).

Yet, despite greater concerns about losses to their portfolios and protecting their assets, findings revealed a preparation gap as women were somewhat less likely than men to have a strategy in place to protect their assets against market risk (60% vs 67%). Meanwhile, women were more than twice as likely as men to say they didnât know if they have a strategy (15% vs 7%).

The COVID-19 pandemic has disrupted womenâs retirement plans. Nearly three-fourths of women (72%) said the pandemic has had a negative impact on how long they could live off their retirement savings. Due to the pandemic, more than two in ten women investors (22%) said itâs likely they would need to delay taking retirement income for the next 12 months and nearly one-quarter of women investors (24%) said they would need to reduce the amount of their retirement income withdrawals for the next 12 months.

Meanwhile, women are likely to live longer than men and are likely to face a retirement income shortfall. Over one third of women (39%) expect to need 20 years of income in retirement. Another third (35%) say they’ll need 30 years or more. But only one in five women (20%) say they’ll be able to live off their current retirement savings for more than 30 years

The Value of Financial Advice

The news isnât all bad. For the first time since launching Advisor Authority, more than two-thirds of women reported that they worked with an advisor or financial professionalâa nearly 10-point increase in 2020 over 2019 (67% vs 58%).

âNow more than ever, women are seeking the help of financial professionals to put a plan into place to protect their assets, manage volatility and save for retirement,â said Lori Hall, Director, Strategic Accounts Nationwide Financial. âAdvisors and financial professionals have an opportunityâand a responsibilityâto understand womenâs retirement planning needs and help them establish a holistic plan to manage through the current uncertainty while remaining focused on long term goals.â

While women are acutely aware of the challenges they face, itâs critical that they take steps now to address gaps in their retirement plan, especially as we start a new year...

Solutions to Bridge the Gap

Despite challenging markets, more than two-thirds of (67%) women and men said that they did not feel pressure to revise their investing strategy over the next 12 months. While women and men were most likely to protect against market risk using diversification (52% and 59%) and fixed annuities (39% and 34%), women were nearly twice as likely as men to say they used Fixed Indexed Annuities (26% vs 15%), while they were far less likely than men to use Registered Indexed Linked Annuities (3% vs 16%).

To help protect against outliving their savings, women and men were most likely to use Social Security (both 68%) and defined benefit plans/pensions (42% and 45%). However, women were somewhat less likely than men to use other guaranteed income solutions to protect against outliving savings, such as deferred income annuities (DIAs; 10% vs 12%), single premium immediate annuities (9% vs 16%) and qualified longevity annuity contracts (QLACs; 8% vs 11%).

For more insights on women investors this year, advisors and financial professionals can also download the latest Advisor Authority infographic at: https://news.nationwide.com/women-investors-concerns/.

Nationwideâs sixth annual Advisor Authority study powered by the Nationwide Retirement Institute explores critical issues confronting advisors, financial professionals and individual investorsâand the innovative techniques that they need to succeed in todayâs complex market. This is the fourth in a series of ongoing releases from the sixth annual study.

About Advisor Authority: Methodology
The sixth annual Advisory Authority Survey was conducted online within the United States by The Harris Poll on behalf of Nationwide from May 27 â June 25, 2020 among 1,768 advisors and financial professionals and 817 investors, ages 18+. Among the 1,768 advisors and financial professionals, there were 758 RIAs, 642 Registered Reps, 500 Wirehouse and 165 other advisors. Among the 817 investors, there were 297 women and 520 men. Investors are weighted where necessary by age by gender, race/ethnicity, region, education, income, marital status, household size, investable assets and propensity to be online to bring them in line with their actual proportions in the population. Respondents for this survey were selected from among those who have agreed to participate in Harris Poll surveys. Because the sample is based on those who were invited to participate in the Harris Poll online research panel, no estimates of theoretical sampling error can be calculated.

About The Harris Poll
The Harris Poll is one of the longest running surveys in the U.S. tracking public opinion, motivations and social sentiment since 1963 that is now part of Harris Insights & Analytics, a global consulting and market research firm that delivers social intelligence for transformational times. We work with clients in three primary areas; building twenty-first-century corporate reputation, crafting brand strategy and performance tracking, and earning organic media through public relations research. Our mission is to provide insights and advisory to help leaders make the best decisions possible. To learn more, please visit www.theharrispoll.com.

About Nationwide
Nationwide, a Fortune 100 company based in Columbus, Ohio, is one of the largest and strongest diversified insurance and financial services organizations in the United States. Nationwide is rated A+ by both A.M. Best and Standard & Poorâs. An industry leader in driving customer-focused innovation, Nationwide provides a full range of insurance and financial services products including auto, business, homeowners, farm and life insurance; public and private sector retirement plans, annuities and mutual funds; excess & surplus, specialty and surety; pet, motorcycle and boat insurance. For more information, visit www.nationwide.com. Follow us on Facebook and Twitter.