Wired For Success: On Rainmaking, Recruitment and Making The Sale 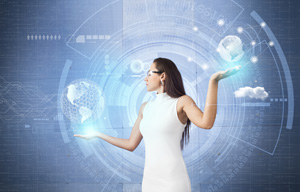 Ms.MacDonaldÂ is a freelance business and finance journalist who began her career as an award-winning journalist atÂ The Cincinnati Enquirer. Ms. MacDonald has written for one of the Internet’s first consumer feedback websites and her current articles are published across numerous online platforms. Ms. MacDonald’s focus areas include Fortune 100 companies, corporate finance, business strategies and technology. Reprinted with permission. Connect with Sue:Â suemac5555@gmail.com.

Editor’s Note: All good advisors understand the very basic formula for success: call 10 people, see three, write one. What’s the constant variable? Finding enough people to fill your week… week in and week out. Now, the emergence of new technology enables any salesperson, regardless of their product, new and exciting ways to solve this age old challenge. We offer Sue MacDonald’s thoughtful piece on how Attorney Laura Anthony is bringing this challenge into the modern arena.

According to Wikipedia, a rainmaker is a business person “who brings in new business and wins new accounts almost by magic.”

Even if the sources of new business activity are not readily apparent, the definition goes on, rainmaking involves generating “substantial new business or additional cash flow from sources sometimes outside established business channels, sometimes by connecting with people in non-traditional or hidden markets.”

The definition could easily include: “see also attorney Laura Anthony.”

In a contemporary business context, the term rainmaker is applied almost exclusively to law firms. These attorney-closer hybrids are rare indeed, and without them even the most intelligent and innovative collectives of legal minds will never be matched with the appropriate clientele.

The rainmaker is the jet engine that propels any law firm, regardless of practice area. They are the luminaries who possess the seemingly effortless ability to attract and maintain clients. Rainmakers have inherently extraordinary people skills and a certain undefinable nuclear confidence, but the great ones don’t count on charm alone.

The real rainmakers are methodical, innovative and resourceful.

Taking the High Ground on the Internet

Her blog, SecuritiesLawblog.com, is read by tens of thousands annually; her proprietary podcasts – or more accurately, LawCasts – are viewed by thousands more, and nearly every high-visibility social media outlet features her written works and video segments.

“In 2001 I was told by a very prominent attorney that no respectable client would ever select an attorney because they found them on the Internet,” says Ms. Anthony. “I couldn’t comprehend why the largest corporate law firms in the industry didn’t even have rudimentary websites. The Internet was wide open at that time, so we designed our first website and made the decision to initiate a long-term approach to permeating every last possible corner of the Internet.”

Ms. Anthony has methodically maintained her strategy for the past 16 years. Without fail, she has authored at least one expansive article weekly for SecuritiesLawBlog.com, and since 2014 she has produced and posted more than 300 LawCastâ ¢ segments on LawCast.com and the corresponding LawCastâ ¢ YouTube channel. And personal appearances are part of the strategy, too.

“I am fortunate in the respect that I really enjoy getting traditional one-on-one face time with prospective clients,” says Ms. Anthony. “The industry conferences held by Rodman & Renshaw and other investment banks are great. Thousands of people gather in a single location, creating nonstop networking for two or three days at a time, and that’s where I make some great connections.”

“My intention with the online strategy was to fill the downtime between conferences and still reach thousands of people daily,” she adds. “Blogging really helped fill that gap, but people want to see your face and hear your voice. LawCast bridged that gap successfully, and now I can’t imagine doing business without it.”

LawCast.com is one of the most prominent examples of podcast series spawned in what has come to be known as the “podcast renaissance” of 2014.

A Kevin Roose article in New York magazine, “What’s Behind the Great Podcast Renaissance?“, explains the phenomenon in detail.

“In 2001, Steve Jobs announced the original iPod, a music player that would make it possible for people to carry their entire album collections in their pockets. Over the next few years, a genre of narrative audio that took the device’s name – ‘podcasting’ – became a thriving mini-industry. There were podcasts about politics, sports, literature, and comedy. There were podcasts that sounded like NPR, and ones that sounded like Rush Limbaugh. Many lacked polish, but most had a kind of energy to them that suited their audiences well.”

There are too many great podcasts to keep up with. There’s Serial, the true-crime drama hosted by This American Life producer Sarah Koenig. There’s 99% Invisible, a design-themed podcast hosted by Roman Mars that has run several mega-successful Kickstarter campaigns. Then there’s StartUp, another product of the public-radio diaspora, which tells the episodic story of NPR veteran Alex Blumberg’s attempt to create a podcasting business.

Even if the sources of new business activity are not readily apparent, the definition goes on, rainmaking involves generating "substantial new business or additional cash flow from sources sometimes outside established business channels

‘It’s spreading like wildfire,’ added John Lee Dumas, the host of Entrepreneur on Fire, a popular business podcast now on its 738th episode.”

“I’m like most people and never felt comfortable speaking on camera, but now producing LawCast segments has become part of my daily routine,” explains Ms. Anthony. “We didn’t want to do the standard self-promotional pieces that are all too prevalent. The vision was to create a news service that appeals directly to our client base and virtually everyone else working in corporate finance, particularly the NASDAQ small-cap market.

“Since we’re producing bona fide news, timeliness is a key factor. I typically write the script at about 6 a.m., shoot it at 9:30 a.m. and the segment is edited and posted by about noon,” she says. “From concept to execution, production time is about six hours. In a few cases we’ve actually had the ‘first-in’ on events and topics that were yet to be covered by any other news service.”

First-generation podcasts were typically crude endeavors devoid of true production quality. The first-in podcasters were attracted to the platform because they were simple to produce and easy to disseminate.

While some of these pioneer podcasts possessed rather impressive content, they were difficult to view because of slow buffering issues and audio quality that made it sound as if episodes were taped in an echo chamber.

Like many other contemporary podcast series, LawCast has achieved successful broadcast quality. When compared to news segments produced by Bloomberg and CNBC, LawCast episodes hold their own.

The indicator that broadcast quality production has been achieved is when viewers don’t even think about production value; they’re solely focused on the content. It’s like getting a good haircut; no one notices you’ve had one.

“I laugh a little when I watch any of the original LawCast segments,” Ms. Anthony says. “We used ambient lighting and tried to cram way too much information into a single episode. The flagship segment was more than 13 minutes and required dozens upon dozens of edits. It took about three days to convert the raw footage into a final. I knew if we kept that pace the concept wasn’t going to get legs, so we really torqued down on production techniques and did everything possible to generate high-quality segments that demonstrated we were as detail-oriented about our podcasts as we are about the legal work product we provide our clients.”

Ms. Anthony and her LawCast team worked with studio lighting, audio and set design professionals. The result is a podcast series that is fast and easy to access from any PC, mobile device or television via Apple TV.

The Rainmaker as a Broadcaster

Financial advisor Suze Orman began her career with Merrill Lynch in 1983, long before the advent of the Internet. In 2002 she founded the Suze Ormon Financial Group, and her program, The Suze Orman Show, began airing on CNBC in 2006. Ms. Ormon made the leap from rainmaker to broadcaster, becoming one of a small group of professionals to transcend traditional rainmaking.

Her name is now synonymous with financial services.

Technological advancements have made it possible for other superstar producers to break into Internet show business, so to speak. They are to corporate finance what independent filmmakers are to the “studio system”: highly driven self-made entrepreneurs who realize they must consistently deliver their powerful messages to a broad audience in order to continuously grow their client base.

Ms. Anthony acknowledges that she learned the broadcasting business from the ground up.

“I had no broadcast experience whatsoever, but I always hit my stride at the conference table, regardless of how many people were there,” Ms. Anthony explains. “I really wanted to come across to the LawCast viewership the way I come across in real life, so I analyzed the screen presence of every broadcaster I thought was exceptional. Then I got to work on my speaking skills to find the rhythm that worked for me. The pivotal moment was when I realized that sincerity was paramount; as long as I could just be myself on camera I was confident that the rest would take care of itself.”

LawCast proves that by combining innovation, persistence and consistency, rainmaking can be taken to a level that was never thought possible in the pre-Internet era. For all practical purposes, by the time an inquiry from a potential client reaches Ms. Anthony’s desk, prospects have already seen and heard her approximately three to five times. The LawCast segments effectively convey her expertise and demeanor to prospective clients even though she has never actually met them.

“Before LawCast there was always a long series of what I refer to as the ‘getting to know you’ conversations before a client retained the firm,” Ms. Anthony says. “I had absolutely no problem with that, but now when I receive an inquiry, there is a much greater degree of confidence on behalf of the client. We speak as if we’ve known one another for years, and this pre-established level of comfort really enhances effective communication. Prospects become clients relatively quickly because they already understand my practice areas and overall business manner.”

Contemporary rainmakers now engage clients on new terrain without sacrificing tried-and-true avenues of commerce. The Internet is now an accepted business venue on par with golf courses, five-star restaurants and country clubs. Relationships that took months to build now occur organically in a matter of days. Rainmaker and client alike are equally afforded the benefit of increasingly efficient time management. Meetings that were formerly a little awkward at first are now more relaxed and productive.

“I really don’t think that anything will ever replace traditional face time,” says Ms. Anthony. “But LawCast has definitely changed the game and nothing is more satisfying than meeting new clients for the first time and seeing them retrieve the specific segment on their mobile device that motivated them to contact the firm.”