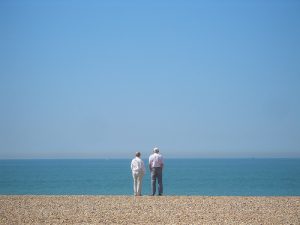 Equities closed out a lackluster quarter basically flat, as investors grappled with the effects of the chilly winter and widespread volatility. Though the major indices approached new highs in March, stocks gave in to selling pressure at the end of the quarter. For the quarter, the S&P 500 gained 1.84%, the Dow lost 0.35%, and the Nasdaq fell 0.10%.

On the economic front, the quarter was a bit of a disappointment, though economists hope that a warmer spring will cause improvement in economic indicators. The final jobs report of the quarter showed that employers added 192,000 new jobs in March, though the unemployment rate remained unchanged. The good news is that milder weather and better job prospects are drawing the unemployed back to the job search. January and February job additions were revised upward, meaning the job market was not as weak as first thought.

Though economists had hoped for more new jobs in March, the labor market reached a milestone last month when private-sector employment passed its previous all-time high of January 2008. Though it’s taken six years to get here, total employment is finally back where it was before the financial crisis. Unfortunately, the economy still has a way to go to regain its former vitality.

Retailers saw their sales slump last quarter as icy weather caused shoppers to stay home. Excluding automobiles, retail sales have been virtually flat since October, meaning retailer earnings probably took a hit. Major chains will release their March sales data next week and analysts will be looking to see if a warmer March sent more shoppers to the mall.

The manufacturing sector also experienced a weather-driven slowdown in January, but factories shrugged off the cold winter in February with a surge in new orders, the largest increase since September. A different survey showed that manufacturing growth accelerated in March.

This January, the Fed welcomed its new chairwoman, Janet Yellen. So far, Yellen has held the party line, continuing to scale back quantitative easing and reducing monthly bond purchases to $55 billion at the March meeting. The Fed also shifted its stance on unemployment, dropping its 6.5% unemployment threshold in favor of more nuanced language.

Earnings will soon start trickling in and investors will get a good look at how well firms were able to manage lackluster demand at the beginning of the year...

Investors reacted badly to hints that the Fed might raise short-term rates before the end of 2015. In a speech last week, Yellen attempted to reassure investors by stating that the economy still needs “extraordinary support” and that she has a strong commitment to maintaining support until the economic recovery is self-sustaining.

Global events also took their toll on markets last quarter, with a burgeoning crisis between Ukraine and Russia and emerging market issues contributing to a great deal of volatility in U.S. markets. Though the threat of violence in Ukraine appears to be over, markets are still nervous about the effects of economic sanctions against Russia may have on U.S. and European companies. Investors, who had sought higher returns in developing economies in previous years, fled signs of structural weakness, causing overbought emerging market equities to fall.[9] Many questions remain about the ability of developing economies to survive the end of cheap credit.

Looking ahead at the second quarter of 2014, analysts will be looking for more encouraging economic data that they hope with a warmer spring will cause growth to accelerate. Though this week is light on data, investors will be looking forward to getting a closer look at the minutes from the Federal Open Market Committee (FOMC) mid-March meeting to get more details about the Fed’s thinking behind their shift in guidance. Earnings will soon start trickling in and investors will get a good look at how well firms were able to manage lackluster demand at the beginning of the year.

Though we can’t make predictions about which way markets will go, we’re still optimistic about economic growth and market performance in 2014. We believe that underlying economic fundamentals are still strong and that the seasonal effects of winter will give way to stronger performance this quarter. If you have any questions about how market events may affect your portfolio, please don’t hesitate to reach out.