What Will My Savings Cover In Retirement?

Plan for them to provide 45% of your pretax, preretirement income

A new article from from Fidelity Viewpoints asks some important questions about the goals your clients are making for todayâs retirement. Reprinted with permission. Visit here or more details. 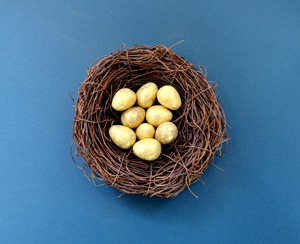 Have you ever found yourself lost when visiting a new place? Then you know how hard it can be to find something when you don’t know where you are going. The same applies to saving for retirementâuntil you know the goal, it is hard to figure out if you are on the right path.

To simplify matters, Fidelity analyzed extensive spending data and found that most people needed to replace between 55% and 80% of their pretax, preretirement income after they stopped working to maintain their lifestyle in retirement.1

Why the drop? Well, you likely won’t be making contributions to retirement savings plans. And not working means potentially lower taxes, less need for certain forms of life insurance, and lower day-to-day expenses. After all, you don’t need to pay for work clothes or commuting costs. You may also decide to pay off your mortgage.

Where will the money come from? The good news is that not all of it needs to come from savings. Social Security will likely cover some of your spending needsârelatively more for lower income earners than those who earned higher incomes. 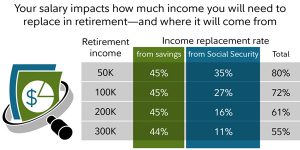 After that, Fidelity research finds that those with between $50,000 and $300,000 in annual income currently should plan for their savings (including pensions) to replace about 45% of their pretax, preretirement income.2 The exact amount, of course, may vary depending on your income, retirement age, and other factors.3

How Much You Earn Matters

Your salary plays a big role in determining what percentage of your income you will need to replace in retirement. People with higher incomes tend to spend a small portion of their income during their working years, and that means a lower income replacement goal in percentage terms to maintain their lifestyle in retirement.

As you can see in the chart below, someone who makes $50,000 might expect to need to replace around 80% of their pretax, preretirement income in retirement to maintain their standard of living, while someone who earns $200,000 might aim to replace closer to 60%. Based on Consumer Expenditure Survey (BLS), Statistics of Income Tax Stat, IRS tax brackets and Social Security Benefit Calculators; local and state taxes not included; retirement age 67 for base case. Source: Fidelity Investments.

When it comes to saving for retirement, set a course for maintaining your current lifestyle in retirementâand plan for your savings to provide 45% of your preretirement income...

When You Retire Matters

Based on Consumer Expenditure Survey (BLS), Statistics of Income Tax Stat, IRS tax brackets and Social Security Benefit Calculators; local and state taxes not included; retirement age 67 for base case. Source: Fidelity Investments.
The age at which you stop working is another big factor in how much of your preretirement income you will need your savings to replace in retirement. Most people are eligible to receive Social Security benefits as early as age 62, but those benefits increase if you wait until your full retirement age (usually 67), and rise even more if you delay until age 70.

The earlier you retire, the more you will have to rely on savings to meet your income needs, because your Social Security payments will be lower (see chart). Let’s consider Bill, who plans to claim his Social Security benefits as soon as he retires. Bill needs to replace 45% of his income from savings if he retires at age 67. If he stops working at 62, that number would go up to 55%. But it drops to 40% if he stays in the workforce until age 70. Delaying retirement gives you more time to save and higher Social Security benefits.

Once you know where you are going, it becomes a lot easier to make a plan to get there, and to measure your progress along the way. When it comes to saving for retirement, set a course for maintaining your current lifestyle in retirementâand plan for your savings to provide 45% of your preretirement income.

Just remember that the amount of preretirement income you will need to replace from personal savings will depend on a variety of factors, including your retirement age and anticipated retirement lifestyle. As always, it can make sense to work through your plan with a financial advisor.

This information is intended to be educational and is not tailored to the investment needs of any specific investor.

1. Fidelity analyzed the household consumption data for working individuals age 50 to 65 from Consumer Expenditure Survey, US Bureau of Labor Statistics. The average income replacement target of 45% is based on the objective of maintaining a similar lifestyle to before retirement. This target is defined at 35% for “below average” lifestyle and 55% of preretirement income for “above average” lifestyle. Therefore, the final income multiplier target of 10x final (preretirement) income associated with the default “average lifestyle” (maintaining preretirement lifestyle in retirement) and a default retirement age=67, goes down to 8x for ‘below average’ lifestyle and increases to 12x for ‘above average’ lifestyle. See footnote 3 for investment growth assumptions.