Whoâs Going To Own Your Assets After You?

Itâs very difficult to administer your estate from the grave 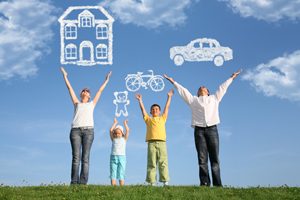 Mr. Daroff is a contributing editor to Advisor Magazine, and is affiliated with Baystate Financial Planning, in Boston. Visit www.baystatefinancialplanning.com

Consider the likelihood that 80% of your net worth passes on to the next generation, after estate taxes (reduced by the State and Federal exemptions, so may be zero) and income taxes on retirement accounts (State and Federal income taxes with no benefit of stepped-up basis). So, the largest asset in your estate (unless you are a business owner) is likely your retirement accounts, not your house. Just a generation or so ago, my parents received pension income. My brother and I inherited nothing from that.

Your children may use up 50%, leaving only 40% of your net worth to your children. One cause for this loss in value is divorce (losing value to your future ex-son-in-law or ex-daughter-in-law). Another is paying off loans and general lifestyle expenses. Compared to a generation or so ago, my income and net worth is higher than my parents. My childrenâs income and net worth, however, may not exceed mine.

So, âWhoâs going to own your assets after you?â How much would you like to allocate to Family? Friends? Community/Charity (Houses of Worship, Alma Mater, Art and Music, Medical Research? And others?) Government/Taxes?
Iâm reasonably sure that your allocation to Government/Taxes is zero. Taxes do not motivate charitable giving. Charitable giving is motivated by your connection to the charity and its purpose, how the charity will apply your gift (people prefer to gift to a specific campaign such as a building renovation), and your personal values of helping others. Tax consequences do help you select WHAT assets are best transferred to charity during lifetime and at death.

But, whatâs the best asset to give to charity during lifetime? It depends on your age. If you are under age 70Â½, then gifting low basis, highly appreciated, assets avoids the tax on capital gains. In how many years have you made a cash gift to charity in the same year you incurred a capital gain, even if the taxable gain was the result of re-balancing your asset allocation in your investment portfolios? Whatâs the best asset to give to charity if you have already attained age 70Â½? Your retirement accounts, directly as a Qualified Charitable Distribution up to $100,000/year. You avoid paying income taxes. Income tax rates are higher than capital gains tax rates. The retirement accounts and life insurance are great sources for gifts to charities at your death. But, remember, they are governed by beneficiary designations, not by your Will. Yet, most charitable bequests are found in the Will. You should change that.

I was asked a question the other day, âHow do you âguaranteeâ that the funds you leave to charity will be used in the manner you desire?â I have a former colleague whose family donated land for a Church. But, in recent years, the Church was torn down and a new office building was put up in its place. The family asked the Church to return the land to the family since the purpose of their gift was solely for its use as a Church. They were told that their gift was non-refundable.

So, I began to think. How could this gift have been handled differently? What if the family had granted a land lease to the Church with zero rent provided the land continued to be used by the Church. Then, given the fact pattern above, the land lease would have ended. The family would have still owned the land for its own development. What if you gifted a large amount of value to a hospital that specialized in a disease to which your family has a particular connection (such as Dana Farber for Cancer), but then the hospital then merged with another hospital that you donât like as much? The gift is non-refundable. However, if you gifted to a Private Foundation or Donor Advised Fund, you could then allocate a portion of the income and principal to the hospital annually.

If the purpose of the hospital changed, you, or your family, could then change where the income and principal is used. Your life insurance could also be used to build up the value of your Private Foundation or Donor Advised Fund. Since there is an annual review of how the income and principal will be allocated, you can involve your children, grandchildren, and beyond in making those choices.

The Safe Haven Of Trust

How do you protect your assets that you leave to Family from future ex-in-laws, and other creditors? Consider leaving your assets in trust. Your revocable living trust becomes an irrevocable trust when you die, since you were the only one who could revoke it. Because you are establishing it for the benefit of others, it is also a Domestic Asset Protection Trust (DAPT) in every State, not just the DAPT favored States like, Nevada, South Dakota, Alaska, New Hampshire, and a few others. Your children can become trustees of their own trust share. Give them the power to appoint a disinterested co-trustee who they have the power to remove and replace. Or, give a majority of your children that power to appoint, remove, and replace disinterested trustees for each trust share. Or, appoint a Trust Protector. The trustee could have the power to distribute or loan some, all, or none of the income and/or principal to or for the benefit of your lineal descendants.

Whoâs going to own your ASSETS after you? You can rule from the grave. You can provide multi-generational tax planning (generation skipping) and multi-generational creditor protection by having trusts created properly and by selecting the State whose laws will control. Some States are better than others for income tax planning, asset protection, ability to amend (decant), and extending the number of generations before any of the assets are subject to estate taxes (in states that have repealed the Rule Against Perpetuities). â