Who Pays For Aging?

Considerations on the global wallet, and theÂ lines of defense on the road to retirement 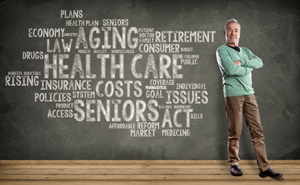 The following is an excerpt from Swiss Reâs âWho Pays for Ageing?â report. To read the report in its entirety, visit swissre.com/ageing.

As the ageing population increases, the working age population in most countries around the world decreases. Itâs a triumph of medicine, public health and human progress: the worldâs total older population will nearly triple to 1.5 billion people between 2015 and 2050.

But ageing societies also bring considerable challenges and dynamics. Health-related risks increase as people get older: from the inevitable, like bone mass decline, to the less predictable like dementia. Longer lives also bring higher health and care costs, and a greater need for more income amid an uncertain environment.

Swiss Re recently published the âWho pays for ageing?â report to help broaden the discussion and encourage the development of solutions to address these financial needs, which is estimated at $11 trillion annually. The report looks at the total costs to support the senior population, from health and social care, to the inheritance they aim to pass along, to where the money comes from, and how insurers can play a stronger role in funding solutions.

The study covers six insurance markets in detail – Australia, China, Germany, Japan, the UK and the US.

In terms of size, it is little surprise that the US has the largest wallet, at a spend of an average $66,000 per person over 65.
The size of wallet in the US substantially outweighs other markets â both on a total and per capita basis. Between family contributions, social security and the state-funded Medicare health system, the society component (57%) is significant. However, insurance (11%) has its highest share in the US among all six markets. Savings at 32% of the wallet means that the US matches Australia as the nation with the highest proportion in this category.

US Market overview
Savings products and a culture of home ownership are well established in the US. As the standard retirement age increases, the volume of savings should grow and could relieve some of societyâs expenditure. Insurance claims a much larger share in the US for various reasons: a relatively successful annuity market, Medicare supplemental products and the tax benefits of whole life mortality products. If anything, the US numbers inflate the overall insurance share of wallet across the six markets. Long-term care insurance accounts for just 3% of the total spent on care, compared to the substantial 58% provided through informal care.

This has the potential to change with some innovation. New business premiums for traditional long-term care insurance fell by 18% per annum between 2011 and 2013 thanks in part to higher prices and fewer providers and distributors. Yet chronic illness and long-term care accelerated benefit riders grew by 36% each year, after starting from a low base2. These products pay out a portion of whole life insurance early if the insured canât perform certain activities of daily living, ensuring the consumer will either benefit from the rider or bequeath on their death.

As the senior population expands, we can expect a higher overall expenditure on the 65+ generation. The aggregate market will therefore be even larger than todayâs annual $11 trillion across the three sources of funding. However, trends such as high levels of sovereign debt and health cost inflation suggest that spending will not increase at the same rate as the population.

Insurance claims a much larger share in the US for various reasons: a relatively successful annuity market, Medicare supplemental products and the tax benefits of whole life mortality products

The size of the ageing wallet per capita, therefore, will likely decline and more people will potentially have a lower standard of living due to economic circumstances, personal choice or a major event like the onset of a chronic disease. Other trends indicate what might happen to the shares of wallet in the future.

How do we fund our ageing wallet?

In all markets, the largest line of defense is society, including the state and the family. Welfare approaches are at differing levels of maturity throughout the world. There are various models of societal support: those that are more family oriented, those that provide universal benefits where everyone receives the same minimum level of healthcare or income for example, and those that only support the people least able to afford private solutions. This report shows that no single system dominates in a market, but instead they follow different âhybridâ approaches.

The next line of defense is savings, accumulated over an extended working life. This can help provide a more comfortable lifestyle and fund the aspirational aspects of peopleâs senior years. Savings can also be used to âtop upâ where societal support is insufficient or to purchase services where family or state services are lacking.

However, savings are highly prone to shock events in later life and will be insufficient for the majority who live longer. Insurance should largely kick in during the decumulation stage and protect against the peak risks to which older people are more vulnerable across the needs spectrum to âlive secure, live well and save something to bequeath.â For example: outliving oneâs income, major health events requiring care, either at home or in an institutional setting, and ensuring that funeral expenses are covered.

These defense lines correspond to funding sources and peopleâs needs. The trends indicate societyâs lionâs share of the ageing wallet will decline over time.

Where can insurers help?

Historically, the re/insurance industry has focused on working age individuals where the pooling effects provide greater diversification and claims are less likely. Today should we be looking at more products that smooth consumersâ risks and largely kick in during the decumulation stage?

The potential for more years of poor health or disability and the uncertainty surrounding those scenarios could lead to a more important role for insurance in private market provision.

Insurance has an opportunity to enhance products that smooth consumersâ risks, acting as a viable alternative or complement to savings. In America, for example, insurers could find new ways to grow their world-leading share of the wallet, thanks to government proposals to help more people secure a lifetime income in retirement, along with opportunities for innovation in health and long-term care. Insurance can also smooth the decumulation phase, helping to protect against outliving oneâs savings, unexpected health shocks, care needs and wider family issues.

By addressing the need for greater resilience for those over 65, the industry could access an underserved market. While the number of traditional insurance customers (those aged 30-49) in the developed world will fall by about 40 million, the over 65 population will grow by 116 million between 2015 and 20503. Thatâs a 50% increase, and a market ripe for opportunity. â