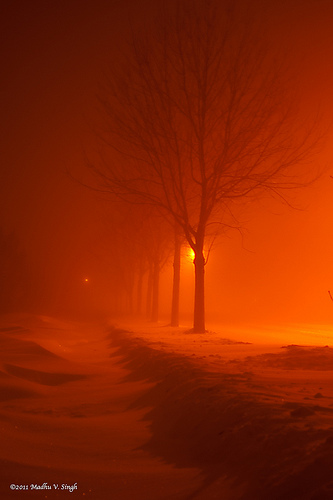 January 6, 2014- This is the time of year where, in many parts of the county, the weatherâand weather forecastersâdominate the nightly news coverage, certainly when the predictions are dire. Indeed, having had the opportunity to live in several different parts of the country, I can assure you that the bigger the projected snowfall, the more hyped the coverage.

Several weeks back, the local meteorologists were all agog about an impending snowfall in the Washington, DC areaâa snowfall initially projected at 2â4 inches of accumulation, but that was quickly revised to 3â5 inches, and then to 4â7 inches. The local mass transportation systems sprang into action, announcing alternative schedules, state officials advised those who didnât need to be on the roads to stay home, non-emergency federal employees in the area were granted an excused absence, while others were directed to telecommute.

As it turned out, it did snowâbut not much, and certainly not in the amounts that had garnered all the attention. Afterwards, meteorologists were quick to point out that accumulations had matched projections in some areas, although those areas were relatively small and generally far removed from major metropolitan centers. Ultimately, more were affected by the weather forecast than the weather itself.

Dire predictions are also common about the retirement prospects for Americans. A recent headline proclaims âAmericans Are $6.8 Trillion Short On Retirement Savings,â a figure that the article proceeds to tell us amounts to $113,000 per household âfor those on the eve of retirementâ âthat is, those ages 55 to 64.

Actually, that $6.8 trillion is the low end of a range published by the National Institute on Retirement Security (NIRS) about six months ago,[1] and is close to the $6.6 trillion estimate of the Center for Retirement Research (CRR), which we have commented on previously (see âRely-Able?â) The NIRS projections were largely derived by looking at self-reported retirement account balances, financial assets and net worth from the Federal Reserveâs 2010 Survey of Consumer Finances, incorporating some assumptions about defined benefit assets, and extrapolating target retirement savings needs based on a set of age-based income multipliersâincome multipliers, it should be noted, that have no apparent connection with actual income, or with actual spending needs in retirement.

A recent headline proclaims âAmericans Are $6.8 Trillion Short On Retirement Savings,â a figure that the article proceeds to tell us amounts to $113,000 per household âfor those on the eve of retirement

For public policy purposes, EBRI has long defined adequate retirement income as having the financial resources to cover basic expenses plus uninsured medical costs in retirement. Working from that definition as a starting point, along with an assumption that retirement represents the cessation of paid employment and begins at age 65[2], we have projected that approximately 44 percent of Baby Boomer and Gen-Xer households are simulated to be at risk of running short of money in retirement, assuming they retain any net housing equity until other financial resources are depleted. Our most recent assessment of that total aggregate gap between needs and available resources is $4.6 trillion, with an individual average of approximately $48,000.[3]

That is, of course, still a large gap, though one considerably smaller than that highlighted in the article. While it represents a lot of householdsâit also includes a wide range of personal circumstances, from individuals projected to run short by as little as a dollar to those projected to fall short by tens of thousands of dollars.[4] For those seeking to understand, and perhaps craft solutions for, the current projected shortfalls, this is an important distinction, and one given short shrift by a headlineâs focus on the aggregate.

A lot of science goes into making weather projections, and yet a temperature difference of a mere degree or two can be the difference between a modest rainfall or a blizzard of epic proportion. Beyond those reality variables, imprecise modeling assumptions can distort forecasts, producing their own disruptions.

When it comes to effective retirement policy, it is, of course, important to be able to quantify just how big the nationâs retirement savings shortfall is. It is, however, perhaps even more important to remember that whether an individual shortfall exists will be a combination of individual circumstances, as well as varying degrees of preparation, access, and needs.

Notes
[1] The NIRS report, âThe Retirement Savings Crisis: Is it Worse than We Think?â is available online here.
[2] EBRI has also performed analysis on retirement ages other than 65.
[3] EBRI recently submitted congressional testimony on âThe Role of Social Security, Defined Benefits, and Private Retirement Accounts in the Face of the Retirement Crisis.â Included in that testimony was an analysis of the probabilities of successful retirement by income quartile for both voluntary and automatic enrollment 401(k) plans. You can read it online here.
[4] Nearly one-half (49.1 percent) of Gen Xers are projected to have at least 20 percent more than is simulated to be needed, for example, while about 1 in 5 (19.4 percent) are projected to have less than 80 percent of what is needed. See âAll or Nothing? An Expanded Perspective on Retirement Readiness,â online here.