Investing in cryptocurrencies like bitcoin has become increasingly popular, but it involves risks and is not for everyone

A new report from Fidelity details how the largest cryptocurrency works, along with the key risks to understand. Reprinted with permission. 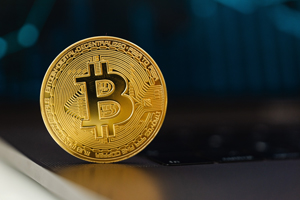 From dramatic news headlines to wild ups and downs in prices, you can’t go far these days without hearing about cryptocurrencies. And this year for the first time the IRS is asking us on its tax Form 1040 if we invested in them.

But just because crypto seems to be everywhere doesn’t mean it is easy to understand, or that it is right for you. Here’s a laymen’s guide to help you better understand the ins and outs of the most familiar of cryptosâbitcoin.

Bitcoin, also known as BTC, is the world’s first and largest decentralized digital money. Decentralized means it’s not backed, controlled, or owned by any government, central bank, corporation, or other institution. Instead, Bitcoin is managed by computer software that anyone with access to the internet can download and use to monitor and verify transactions. Compare that with a dollar, for example, which is backed by the US government and regulated by the US Federal Reserve.

Bitcoin is the network of connected computers where the digital token (also known as bitcoin) lives. The currency is digital only, meaning it cannot be removed from its digital network and therefore does not exist in a physical form like paper money. You cannot place a physical bitcoin in your wallet, even if you buy it at a bitcoin ATM (yes, those exist).

In addition to being a digital currency that can be used to make transactions, bitcoin can also be used as a store of value and as an investment. While there are thousands of cryptocurrencies, bitcoin is the most widely held and traded.

How Does Bitcoin Work?

The technology powering bitcoinâand all other cryptocurrenciesâis called blockchain. Think of blockchain as a gigantic digital database (referred to as the ledger) that stores details of every single bitcoin transaction and distributes them across the internet to computers that are running the Bitcoin software. Every cryptocurrency uses its own specific blockchain. The computers running the software batch transactions together in groups, called “blocks,” which are then added to the database or ledger in chronological order, forming a chain using cryptographic functionsâhence the terms “blockchain” and “cryptocurrency.” The total number of computers running the Bitcoin software (called nodes) is in the tens of thousands.

What Is Bitcoin Mining And How Does It Work?

Bitcoin mining is the process through which new transactions on the bitcoin blockchain are verified.

Bitcoin miners compete with one another to solve cryptographic puzzles to verify any transactions involving bitcoin. Consequently, transactions take 10 to 60 minutes on average, and this can vary depending on how much you want to pay in fees and how sure you want to be that the transaction is fully confirmed. While this is significantly faster than electronic fund transfers, which can take days to process, it’s not nearly as fast as credit card transactions, which can take just a few seconds.

Bitcoin mining releases new bitcoin into circulation as a reward to miners who have dedicated computing power and electricity to help secure the Bitcoin network by verifying transactions. New bitcoin are also released according to a schedule that was already preprogrammed into its code when it was created.

In 2008, a person or team referred to as Satoshi Nakamoto published a paper outlining the principles governing Bitcoin technology. Then, in 2009, BTC itself was launched. To this day, no one really knows who Satoshi Nakamoto is.
How many bitcoin are there?

According to Bitcoin’s current code, there cannot be more than 21 million bitcoin in existence. It is highly unlikely this cap will be changed due to Bitcoin’s software code and how the rules are maintained. Of the 21 million that might eventually exist, there are currently a little over 19 million bitcoin already released, and the rate at which new bitcoin are released gets cut in half approximately every 4 years.

In addition, bitcoin is readily divisible, which allows you to buy small pieces of the cryptocurrency. The smallest unit of bitcoin is called a Satoshi or “sat” for short. There are 100 million sats per bitcoin, making bitcoin divisible to 8 decimal placesâmore than most traditional currencies. So, if the price of a whole bitcoin were $1 million, each sat would be equivalent to one cent.

What Is Bitcoin’s Price, And How Is It Determined?

How To Use Bitcoin

With bitcoin, people can send each other money directly over the internet without involving a third party like a bank or credit card company. This is known as a “peer-to-peer” transaction.

You can also buy bitcoin as an investment. Bitcoin’s price has risen from $0.09 at its founding in 2009 to roughly $29,000 as of mid-May 2022âwith huge price swings occurring on a frequent basis (see graph). Investors need to be sure they can stomach that kind of volatility and risk of loss.

What Is A Bitcoin Wallet?

A bitcoin wallet is essentially an electronic vault where you can hold bitcoin. Just like your bank or investment account has a routing number, your bitcoin wallet will have a public address. It consists of seemingly random letters and numbers that aren’t necessarily linked to names, home or business addresses, or other personally identifying information.

In addition to being a digital currency that can be used to make transactions, bitcoin can also be used as a store of value and as an investment. While there are thousands of cryptocurrencies, bitcoin is the most widely held and traded...

You will need your public address, along with password-like codes called public and private keys, to send, receive, and access your bitcoin.

In most cases, those who purchase, sell, or transfer bitcoin will be charged transaction fees by the platforms where they hold their cryptocurrency. Transaction costs can vary widely, ranging from 0.5% to 4%, depending on the funding method used.

Every bitcoin transaction also has a so-called network fee. This is automatically deducted from the bitcoin sent, and the amount of the fee varies based on a variety of factors. Transaction fees on the core Bitcoin network fluctuate, depending on how congested the network is.

Sales or other dispositions of bitcoin (and other cryptocurrencies) are generally taxable events. Taxes on cryptocurrencies are similar in many respects to those of other capital assets like stocks and bondsâwith short- and long-term holding period tax rules applying. But beware that complexity can exist with crypto taxes, such as if you are actively trading and making many crypto trades. Consider consulting a tax professional if you have crypto tax questions.

Risks Of Investing In Bitcoin

Some people have been drawn to bitcoin trading as a way to make a quick profit. However, as is the case with most speculative investments, you need to be careful. Buying, selling, and using bitcoin carry numerous risks, including:

When researching and evaluating any investment, it’s important to determine whether it fits with your time horizon, financial circumstances, tolerance for volatility, and risk of loss. If you’re thinking of investing in bitcoin or related opportunities, take the time to get educated about digital assets, be prepared for significant price gyrations, and proceed with caution.