A view from abroad

Welcome to the World of Taxes!

A philosophical introduction for new taxpayers 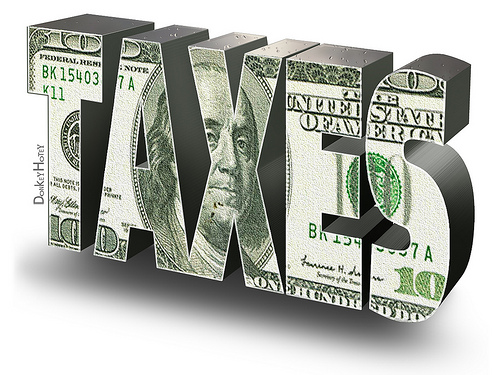 Mr. Sicart is Chiarman and Founder of Tocqueville Asset Management Formed in 1985,Â Tocqueville Asset Management is an entrepreneurial, employee-owned partnership that focuses exclusively on “growing and preserving our clients long-term capital. We invest alongside our clients and therefore have more than a professional interest in producing results that meet and exceed expectations.” Visit tocquville.com. Reprinted with permission.

When I started in the money-management business, in 1969, I inherited a largely European clientele who, it is fair to say, were more knowledgeable and sensitive about taxes than I was. The reason for this was partly the result of many banksâ and advisersâ preferred technique for acquiring customers, which can be summarized in the title of a popular sales seminar: âFear Sells, So Sell Fear.â

Europeâs history had made that sales approach easy: A succession of wars, invasions, and confiscations had led to a tradition of hiding oneâs fortune in a safe place, preferably in another country. More recently, during World War II, many wealthy European families, especially Jewish ones, had found ways to hide some of their assets that might be confiscated by the Nazis in either neutral countries such as Switzerland or faraway ones such as Canada and the United States.

Once the war was over, the business of selling fear helped fuel paranoia over a possible Soviet invasion or other apocalyptic calamities. But then it was discovered that an equally menacing â and more certain â predator was the taxman, present in leading democratic countries eager to finance their welfare-state ambitions. The age-old French adage, âto live happy, live hidden,â thus became the motto of tax advisers everywhere. Fortunes were lured to so-called âtax havens,â countries whose constitutions imposed banking secrecy, thus allowing wealthy families to hide a portion of their riches.

It should be noted that, at the time, not all but many of the schemes offered by tax havens were either legal or tolerated in major countries. One factor that allowed the status quo to survive, even after a number of governments began to frown on tax avoidance, is that until recently there was no cooperation among countries on the subject of taxation. In fact, it might be said that there was fierce competition.

All this began to change in 1989, with the creation of the Financial Action Task Force (FATF), an inter-governmental body established on the initiative of the G7 nations and housed at the headquarters of the OECD in Paris. The FATFâs mission is to generate the necessary political will among its 36 member states to bring about national legislative and regulatory reforms for combating money laundering, terrorist financing, and other related threats to the integrity of the international financial system. Although nowhere is taxation specifically mentioned in its statement of purpose, the FATF initiative has given a tremendous boost to the global exchange of information and cooperation among states on tax matters as well. In very recent years, this has led to a proliferation of multilateral and bilateral tax treaties that have practically eliminated banking secrecy in most countries â at least, those that aim to appear ârespectable.â

In the 1970s, French citizens who had accounts in US banks, for example, were not subject to French taxation on these accounts, although they were supposed to disclose them to the French tax authorities.

Taxes on the interest earned from these accounts were withheld at the source by the American IRS; and, I was told, a copy of the form reflecting this withholding was routinely dumped into a building somewhere in Pennsylvania. Once a year, a representative of the French tax agency would come in and leave with an armful of withholding notices. Since no crime was being committed, and the statistical odds of an always-unpleasant inquiry were close to zero, no one (to my knowledge) bothered to report these American accounts to the French tax authorities.

However, as soon as IBM introduced its PC, in 1981, and I was able to get an early taste of the potential uses of computers with large databases, it occurred to me that the odds had shifted and bank secrecy was doomed â which is what I started preaching to whomever was willing to listen. Of course, this was well before the spread of the Internet in the mid-1990s, which made the exchange of massive data easy and instantaneous.

With computersâ processing ability having also been immensely increased over the same period, the means were now available for governments to share data on a global scale. At about the same time, the motivation for nations to cooperate by exchanging information was also enhanced and justified by the necessity to fight the narcotics and arms trades and their money-laundering operations. Given these conditions and events, how could the tax collectors not take their place at the table? What had first been only a possible logical outcome has become a very palpable reality in the last few years.

I am writing this paper now because two waves of new investors are just assuming wealth-management responsibilities without any experience of dealing with tax obligations or authorities. The first wave comprises the new generations of wealthy families, who will most likely live in a much more global world than their parents and thus be potentially subject to taxation in several jurisdictions.

The second wave includes citizens and residents of countries that recently have joined the modern economy, with many wealth-building opportunities but also new tax obligations looming on the horizon. In investment matters I have often made the point that there is a plethora of ready-made technical answers, but that the right questions (lifestyle choices, values, and priorities) are rarely asked. In my experience, the same applies to tax planning. I should stress that I am in no way an expert in taxation matters and I therefore do not dispense tax advice. But, since I have witnessed many instances where families were faced with tax-related decisions, I consider myself an informed generalist; as such, I have some personal observations (again, as opposed to advice) to offer newcomers to the world of tax planning.

Tax avoidance or interest-free loan from the government?

Just as I was looking for a conclusion to this paper, the Financial Times published an article entitled âThe $62 Billion Secret of Warren Buffettâs Successâ (3/4/2015). Besides the spectacular long-term investment record of his company, Berkshire Hathaway, Buffett is well known for his seemingly contradictory attitude toward taxes. On the one hand, he has been a vocal advocate of higher taxes on the rich â like himself.

On the other hand, as he said to Fortune magazine in 2014, âI will do anything that is basically covered by the law to reduce Berkshireâs tax rate.â It is not as if Berkshire avoided taxes altogether. In fact, based on the Financial Times article, its effective tax rate has been around 30 percent for the last three years, not too far from the standard US corporate tax rate of 35 percent. What Buffett has been particularly good at, however, is postponing the payment of taxes that will eventually become due. For example, he has avoided selling divisions or subsidiaries, preferring instead to swap them for other assets or companies.

Taxes on such swaps would only become due when the assets acquired in the exchange are ultimately sold. In Buffettâs case, this can be very far into the future, since his investment credo is, âThe best time to sell a stock is never.â Using this and other legal loopholes in the US tax code, Buffett has been a master in postponing the payment of taxes due.

For example, according to the Financial Times, Berkshire paid $4.9 billion in taxes in 2014 out of the $7.9 billion it will eventually have to disburse for that year. The use of the money between the time when a tax becomes owed and when it must be paid amounts to what Buffett has described as an âinterest-free loanâ from the government. Finally, despite his political views, Mr. Buffett is not eager to pay unnecessary taxes himself.

As the largest individual shareholder in Berkshire Hathaway, he prefers his company not to pay a dividend: When he (or his shareholders) needs money or income, he prefers to sell some shares, thus incurring tax only at the lower rate for long-term capital gains. In spite of all this, Buffettâs tax attitudes and practices are not necessarily as contradictory as they seem. It is true, for example, that Berkshire Hathawayâs energy subsidiaries have been avid users of tax credits and subsidies for investment in wind and solar energy, and Buffett has publically stated that the only reason they build wind farms is that they get tax credits for doing so: âThey donât make sense without the tax credit.â

But I doubt that, as one of the most successful investors in history, Buffett would have invested billions of dollars in businesses representing 6-7 percent of the US renewable energy market just for the tax credits. In fact, the more likely reason is that, past the initial investment, renewables will likely be steady generators of long-term cash flows, consistent with Berkshireâs concept of value. And when you calculate long-term returns, the amount of the starting investment is crucial: If it is reduced by tax credits and subsidies, your potential long-term return is proportionally enhanced.

The purpose of this paper has not been to argue against tax awareness or tax planning. On the contrary, a strong case exists to seek and implement the optimal tax packages once other, more crucial, decisions have been made. But, since tax matters often tend to create a sort of paranoia that leads us to make tax decisions before we have decided on more fundamental choices, letâs try to remember that the cart does not go before the horse, but behind it. FranÃ§ois Sicart Disclosure: This article reflects the views of the author as of the date or dates cited and may change at any time. The information should not be construed as investment advice. No representation is made concerning the accuracy of cited data, nor is there any guarantee that any projection, forecast or opinion will be realized. This article is not intended to provide tax advice. Please consult with a legal professional or an accountant for such advice.