Washington is the âNew Volatilityâ

Top trends impacting advisorsâ and investorsâ approach to investing in 2017 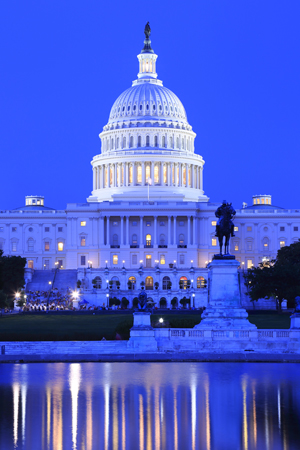 As lawmakers inside the beltway continue to dominate the headlines, new findings from our third annual Advisor Authority study show that Washington politics is rated among the top three trends that will impact both financial advisorsâ and individual investorsâ approach to investing in 2017.

It is clear from this latest survey of roughly 1,600 Registered Investment Advisors (RIAs), fee-based advisors and individual investors nationwide that political risk is on the rise. Just as last yearâs study showed that the presidential elections were a leading influence on advisorsâ and investorsâ approach to investing, this year Washington is the ânew volatility,â as it has an even greater impact on their financial decisions, the health of their portfolios, and affects everything from trade to regulation to tax reform.

The new administration took office during a time of economic strength not seen in years, and the market continues to show positive momentum. But there are also concerns. In this yearâs Advisor Authority study, RIAs and fee-based advisors were asked to select the top three trends that will impact their approach to investing in 2017âand across the board, their focus is squarely on D.C. US Fed Policy ranked first (32%), followed by regulatory changes (29%), with Washington politics coming in at a close third (28%).

Individual investors also shared many of the same concerns about lawmakersâ impact on their approach to investing, rating Washington politics first (33%), US Fed Policy second (29%), while changes to tax code and domestic economic performance tied for third (24%). As everything from interest rates and tax rates are up for debate, while current regulations are coming under fire, and new policies are being proposed, advisors and investors are clearly considering the implicationsâand are preparing to take proactive measures with their investing strategy.

Rising Concerns about Gridlock in Washington

As the White House and Congress continue to negotiate many key initiatives without reaching consensus, we learned that both advisors and investors are more likely than last year to believe that gridlock in Washington will adversely impact portfolios in the coming 12 months. When asked to select the top macro issues taking a toll on their clientsâ portfolios, this year RIAs and fee-based advisors rated global instability first (20%) and rising interest rates second (19%).

Ongoing volatility declined significantlyâfrom number one (22%) in 2016, to number three (16%) in 2017. And advisors said gridlock in Washington spiked to the number four spot at 14% this year, from just 6% last year. Meanwhile, individual investors rated gridlock in Washington first at 21%, a significant spike from just 9% in 2016. Global instability tied with gridlock for number one, while taxes held steady year over year as the number two issue (17% in 2017 vs. 16% in 2016).
2016 vs 2017: Advisors and Investors rate Gridlock Higher Than Last Year

Tax Reform is Top of Mind

Year over year, Advisor Authority has shown that taxes are among investorsâ leading financial concerns. And this year taxes are the number-one financial concern of both High Net Worth and Ultra-High Net Worth Investors. Indeed, taxes can be the single biggest investment expense your clients face. Tax rates can be as high as 40% or even 50%, when Federal and State taxes are combined. Not surprisingly, tax reform is also top of mind for both advisors and investors, with advisors particularly optimistic about the impact on their clients.

The proposed tax reform, if implemented properly, is intended to help the nation achieve economic and budgetary goals while easing the burden on individuals. When asked if they believe their clients will benefit from the new administrationâs proposed tax reform, the majority of RIAs and fee-based advisors (85%) agreed. And two-thirds of investors (66%) also agreed when asked if they believe they will benefit.

In a separate survey of close to 300 RIAs and fee-based advisors conducted earlier this year, we also learned that nearly two-thirds of advisors (63%) said tax reform is the proposed policy which is most likely to cause them to adjust or plan to adjust clientsâ portfolios. Likewise, the majority of advisors (53%) said that tax reform is the proposed policy that clients want to discuss most often with respect to their portfolios. While awaiting an outcome on tax reform, advisors remain focused on pursuing higher returns for their clients through tax-advantaged investing strategies. Minimizing the tax burden should remain a constant investment priority when managing clientsâ wealth, regardless of how or when the proposed tax reform takes effect.

Advisors and Investors Looking Ahead

RIAs and fee-based advisors are optimistic, but they are bracing for turbulent markets in the face of many unknowns

RIAs and fee-based advisors are optimistic, but they are bracing for turbulent markets in the face of many unknowns as Washington lawmakers address a range of key economic and political issues. As we learned in our earlier survey, nearly three-fourths (70%) of advisors say markets will rise over the next 12 months, yet the vast majority (80%) believe changes in Washington will drive ongoing volatility.

Many are already taking action, as more than 40% of these RIAs and fee-based advisors have already adjusted clientsâ portfolios in response to the new administrationâs proposed policies. Of those who have made adjustments, 72% have invested more aggressively and 83% have invested more tactically. Likewise, more than three-fourths (78%) have adjusted holdings of sectors or securities that are expected to benefit under the new policies, and nearly two-thirds (61%) have adjusted the interest rate sensitivity of bond portfolios.

These days, politics are anything but usual, creating tremendous complexityâbut also creating tremendous opportunities for expert financial advisors to create greater value. Now is the time to ruthlessly refine your approach to investing. The most successful advisors will be both proactive and reactive, taking an integrated and systematic approach to continuously assess and address macro developments in a rapidly changing and increasingly interconnected global economy, where risk is heightened by uncertainty around policy and regulation.

And while it may be difficult to predict outcomes in times of change, Advisor Authority shows that advisors and their clients can benefit by controlling what they canâproviding holistic unbiased advice, keeping costs low, and investing for greater tax-efficiency. By putting clientsâ best interest first in this way, advisors of all sizes and at every level of experience can navigate this politically-charged environment of the uncertainâand the unprecedentedâto build meaningful relationships with their clients, drive greater growth for their businesses and ultimately create greater value.

The third annual Advisor Authority study explores the investing and advising issues confronting RIAs, fee-based advisors and investorsâand the innovative techniques that they need to succeed in todayâs complex market. It features a special focus on the most successful advisors and the most affluent investors. An ongoing series of reports will be released from June through year-end.

Among the 779 financial advisors, there were 521 Registered Investment Advisors and 258 Broker/Dealers. Among the 817 investors, there were 208 Mass Affluent, 204 Emerging High Net Worth, 204 High Net Worth and 201 Ultra High Net Worth. Investors are weighted where necessary by age by gender, race/ethnicity, region, education, income, marital status, household size, investable assets and propensity to be online to bring them in line with their actual proportions in the population.

Results of this new research are compared to results from a similar March 2016 study conducted online by Harris Poll on behalf of Jefferson National among 683 employed Financial Advisors, including 440 Independent Registered Investment Advisors and 243 Broker/Dealers and among 733 Investors.