Walking Down Wall Street In A Womanâs Shoes

A short take on the long road to equality 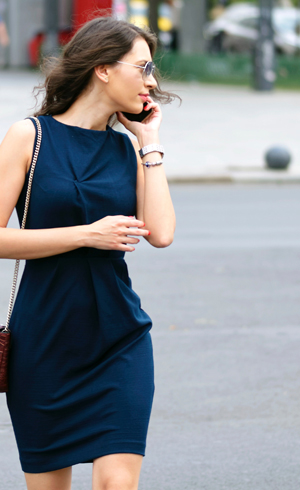 In 1996 it finally became legal for an at-home-mom to fully contribute to an IRA. Only then could she start to save for her retirement. Twenty years later, women have socked away $83,000 on average, in their 401(k)s that will eventually roll to an IRA.Â Until 1974, unmarried women (single, divorced or widowed) could not open their own bank account, credit card, car loan, or mortgage without a male co-signer. Today 62% of all new cars are bought by women, and 50% of all single women own their own homes.

It wasnât until 1978 that women were entitled to maternity leave. Prior to then, there was only âpermanent maternity leave.â Women were forced out of their jobs once âthey were showing.â
In a nutshell, women were iced out of money, credit, loans, and jobs. But, boy, the ladies have come a long way toward financial savvy. In honor of National Womenâs Month, letâs take a walk down Wall Street in high heels. Experience investing and insurance opportunities from a womanâs point of view. See what she sees.

Women had no place on Wall Street

For centuries there was no reason for women to even walk into a bank. So, is it any wonder that many women have been disinterested in or disengaged from their money?

As a proxy for the financial services industry at large, consider the structure and power of the regulating bodies that oversee every aspect of money, banking, credit, lending, and such, then and now. When you think about all the decisions regulators make around access to capital, money movement, ability to secure a loan, open a credit card, or buy insurance, youâd like to be assured that your interests are represented at the table. Yet, here is what youâll see from the most powerful regulators of money from atop those high heels:

1) The Federal Reserve â the most important people controlling money
Since 1913 the Fed has been responsible for US monetary policy and financial system stability. Over its 107-year history, 17 chairmen have been appointed. It took 100 years for the only woman to be appointed to the chairmanship: Janet Yellen was at the helm from 2014 â 2018.

Furthermore, 23 vice-chairs were appointed over the same 107 years. It only took 83 years before the first woman held the number two position: Alice Rivlin served as vice-chair from 1996 â 1999. The only other female vice-chair? Janet Yellen from 2010 â 2014.

2) Apparently, the Comptroller of the Currency doesnât know women control currency
In a shocking discovery, it turns out that the most important person controlling all US banks and federal savings associations since 1863 has always been a man. In the 33 times over the past 157 years that a new Comptroller was appointed, never once has it been a woman. Thatâs rather amusing since most people agree that women are in charge of the checkbook at home. Youâd think that would be something to consider when regulating banking.

3) Closer to home, our industryâs regulating bodies hear very few womenâs voices
The investment industry prides itself on being a self-regulating body, taking care to provide all consumers access to investment products and accounts. Here, youâll see more inclusion since inception in the 1930s:

FINRAâs oversight board includes 23 positions. Nine are women. The chair is a man.

SECâs board is much smaller, with only 5 positions. Two are women. The chair is a man.

US Commodities Futures Trading Commission (CFTC) board has 5 positions. One is a woman. The chair is a man. There have been 38 appointments since 1974, and women have held the chair 8 times.

5) Todayâs NAIC leadership is less than 25% female
According to the 2020 National Association of Insurance Commissioners membership list, women are largely underrepresented in leadership positions:

In honor of Womenâs History Month, itâs important to look at the strides taken by women over the last five decades. It is both astounding to see some women rise to powerful, influential, significant positions in the financial world, and disheartening to acknowledge the slow wheels of progress.

In 1967, after years trying to buy a seat on the New York Stock Exchange, Muriel Siebert finally succeeded. The men doubled down against a woman joining, making new rules for sponsorship and increasing the price required to buy a seat. Yet she became the first woman of Wall Street. There were 1,365 men in the NYSE and 1 woman. Think about that for a moment.

she became a successful business owner for 40-plus years. Her father was an advocate for women, made sure she had a good education, and cheered her on when she found her first job as an assistant on Wall Street. Her mother strongly suggested she become a hairdresser....

There are other âfirst ladiesâ of Wall Street who captured the flag and changed the game for good. But behind them were thousands of women who gained access to jobs and careers where there was good money to be made. They made consistent, compelling contributions, in turn opening new opportunities for the next generation of women.

From bank teller to bank board of directors
One woman I interviewed shared that her first job out of high school was as a teller in a local bank. Her father, a bricklayer, was so proud that he boasted to his friends that his daughter was a banker. It was an insurmountable step that she had taken. Hers was a success the whole family shared.

Starting at $75 a week in 1972, she was later offered a dime per hour raise. She felt she deserved a better raise, so she asked for more, and got it. During one period of layoffs, her job was saved. She knew it was because she was the lowest paid employee at her level, earning $10,000 less per year than a male counterpart.

When women experience that sort of inequity, many are determined to right the wrong. She set her goals on moving up and taking on more responsibility; it took many years. Her first management job came in the late 1980s. It was a 15-year climb. When she retired from her banking career after 47 years, she was one of two women on the bankâs Board. A remarkable achievement.

A Wall Street assistant starts a hedge fund, then her own advisory
Another woman who shared her story with me walked onto Wall Street in the 1960s. She started as an assistant and quickly rose to the trading floor. She was the only woman in the foreign bond bidding room. Next, she started a hedge fund. And, later opened her own financial advisory firm. All in a 12-year period. She was a pioneer on Wall Street, yet, always known as Mrs. John Smith (not her real name). In fact, she recalled her first credit cards werenât even in her name. Always the Mrs.
In running her hedge fund, she evaluated new upstart companies for investment potential around the globe. She asked all the questions; her husband received all the answers. There were numerous kinds of quiet discrimination against women during this âera of subtlety.â Touches on a womanâs knee were part of the culture of the day.

Despite the odds stacked against her and other women working in the 1970s and 1980s, she became a successful business owner for 40-plus years. Her father was an advocate for women, made sure she had a good education, and cheered her on when she found her first job as an assistant on Wall Street. Her mother strongly suggested she become a hairdresser.

Advice from the women trailblazers of the financial industry

Itâs impossible not to admire these women as they talk about their walks down Wall Street. What they overcame, all they accomplished, and how they did so with grace and (mostly) good humor is a powerful legacy they leave to the women who follow. Most of these lady investors, entrepreneurs, leaders, and financial advisors will never be in the history books, but we see their marks on this staunchly male-dominated industry today at all levels of organizations. That we have some room to improve is not unexpected. Itâs that women â and men â of our industry must continue the momentum these few women started 50 years ago.

To current and future generations of workers, these retired female trailblazers offer suggestions for the women and men in the industry today:

What your clients see from their walk down Wall Street

Depending on the years when women entered adulthood, they saw a specific make-up of the insurance and investments industries. What they saw and how they built their financial lives was largely influenced by opportunities and access available in her early adult years:

Regardless of where they are today, itâs important to recognize the very short time period women have been playing with a full set of financial cards. Think about and focus on each clientâs journey with her money and opportunities for investing. Consider how she views the power of money â what it will do for her family and her future. And, have a chat to better understand her road to success, however she defines it. Each womanâs view from those high heels might just be the key to long-term success for your business relationships.