Less than 20% of retirees today have the traditional 3-legged stool, requiring some new strategies 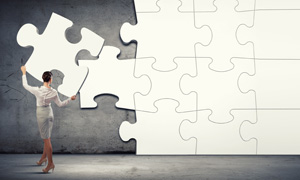 Ms. Smith is Vice-President of Financial Engineering, with Impact Technologies Group, Inc., a provider of software solutions for advisors. Connect by email with Ms. Smith at [email protected] Social Security Pro and Cash Flow Decisions are two software solutions of interest for advisors doing retirement planning. ImpactÂ® has been providing presentations for financial advisors for over 35 years. www.impact-tech.com

Good retirement income planning looks at all the resources a person has available for retirement, intending to utilize the available income efficiently and provide for the retirement lifestyle desired.

Traditionally, retirement planning revolved around the 3-legged stool concept with Social Security, a company pension and personal savings providing retirement income. Times have changed â less than 20% of future retirees can count on a pension.1

In this changing environment both Social Security retirement benefits and personal savings become even more important. Social Security maximization is the latest buzzword in financial planning, with nearly 10,000 baby boomers turning 65 each day.

Googling âSocial Security maximizationâ returns thousands of hits from many sources, showing that itâs important to many: planners, financial institutions and future retirees. Changes in the ability to utilize maximization strategies in the recent Bipartisan Budget Act of 2015 has increased the need for planning.

When do retirees tend to start benefits? Studies show the two most popular ages are age 62 and Full Retirement Age (or FRA). In 2013, 36% of men and nearly 40% of women turning 62 claimed benefits.2 An additional one-third tend to claim between 65 and FRA. Only 4% of women and 2% of men in 2013 were age 70. According to this study, close to 90% claim at or before FRA. The trend to file early seems to be on the decline since 2005, but is still a significant proportion of retirees. Reasons vary, but the need to educate retirees on claiming ages and strategies remains.

Googling âSocial Security maximizationâ returns thousands of hits from many sources, showing that itâs important to many: planners, financial institutions and future retirees

Letâs look at a typical married couple in their mid-50s. Bill is 55 and Maria is 54. Both work and have Social Security benefits at full retirement age of $2371 and $2000, per month. According to the life expectancy tables used by Social Security, Bill should live to 80 on average and Marie to age 83.

Using Social Security maximization software,3 we enter their information. To get the maximum total benefits we find that Maria should file for benefits at age 66 and Bill should wait until age 70.4

But what if they live longer? Billâs parents are both over 80 and healthy, and most of his relatives live into their mid-80s. Maria has several grandparents who lived to be 90. We can adjust their ages to 85 and 90. In that case, the software suggests that both wait until age 70 to maximize their potential benefits.

The difference between both starting Social Security at the earliest age (62) and waiting until age 70 is substantial, nearly one-half million in total benefits received over their lifetimes. Social Security planning is important to a retireeâs success in retirement.

Social Security is only one part of planning. Retirees also must consider their investments, the effect of taxes, and how to use all their resources together as a whole. A retirement cash flow plan must use resources effectively, not only Social Security but also assets, pensions and other incomes to provide a desired retirement lifestyle.

Letâs look at our retireesâ lifestyle requirements for income (Figure 15). Maria and Bill estimate $8000 a month for expenses in todayâs dollars and inflation at 2.5%. They have an estimated $690,000 in various accounts with a 5% average rate of return before taxes. Bill and Maria each earn $95,000 a year and plan to retire at age 65. Putting this all together, we find they are reasonably well off, but will run out of money in their 80s with a shortfall in todayâs dollars of close to $50,000 (present value calculated at 5%.) 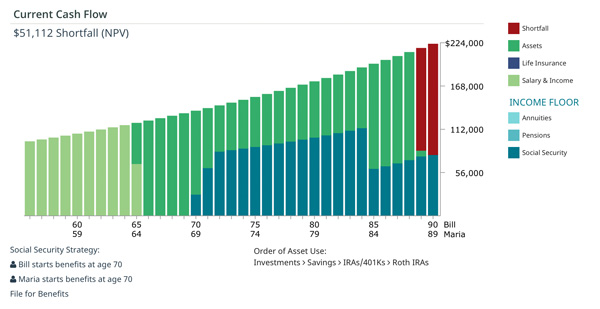 We can optimize further (Figure 2). A good cash flow analysis considers cash flow, taxation and the order in which assets are utilized. We find that Bill and Maria can start benefits earlier, at Billâs age 69 and Maria at 68. The calculation results suggest the optimal order to use assets, which in turn cuts the shortfall to just under $39,000, most of it occurring after Billâs assumed death at 85.5 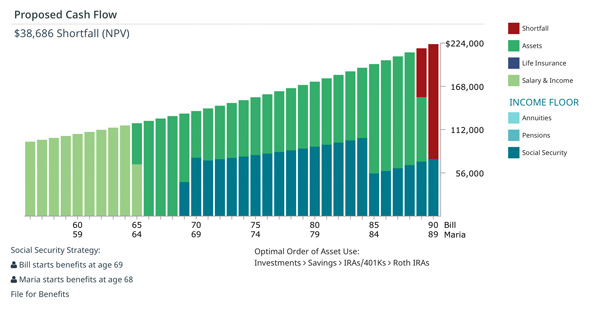 What if Maria lives longer, say to 95 or 100? We can measure the amounts needed at Billâs death and find it is somewhere between $300,000 to over $1,000,000 depending on when Bill dies and how long the survivorship period lasts between deaths. Solving the survivorship needs is one way to solve the shortfall throughout their retirement.

Since Bill is more likely to die first, we have selected a 10-pay whole life policy on Billâs life, with surrenders and loans providing a tax-free6 annual income starting at age 65 of $32,000 a year. Ten annual premiums of $56,430 will be paid using some of the existing assets and salaries.7

Look at the results (Figure 35): assuming death at ages 85 and 90, the life insurance erases the shortfall and leaves over $300,000 to heirs at Mariaâs death. If she lives longer, the deficit is smaller than without the life insurance. If Bill dies earlier, Mariaâs survivorship needs are met. 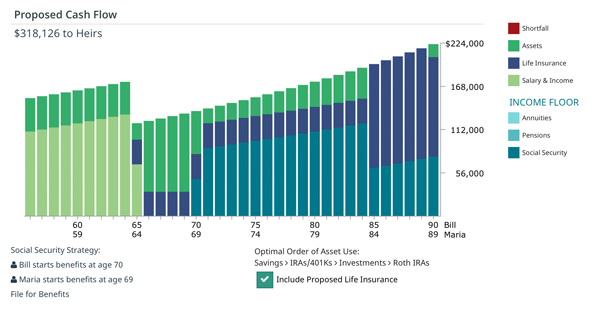 If Maria dies before Bill, the policy has a substantial cash surrender value that Bill could use as needed to supplement his other income sources. Plus, they have turned some of their assets into a $32,000 a year supplemental income source and at the same time reduced overall lifestyle needs.

Retirement income planning is a complicated and fluid process. Just maximizing Social Security is a start, but many other factors can affect cash flow. The type of asset used can produce different taxation, including what percent of Social Security benefits are subject to tax. â