Upside to Inflation? More Americans Are Budgeting than Ever Before

Fifty percent are living paycheck to paycheck, but a spike in using online tools is making budgeting easier

A new survey from Debt.com , a consumer debt & financial advice website,Â  reveals that budgeting increases when financial stress increases and tapers off when the stress does. 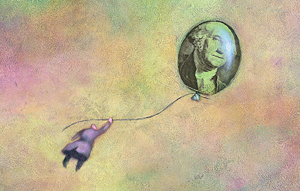 FORT LAUDERDALE, Fla., April 27, 2022 /PRNewswire/ — More Americans are keeping a household budget today than they did during the pandemic â when budgeting reached an all-time high, according to the annual Debt.com Budgeting Survey.

The survey, conducted in April when inflation hit a 40-year peak, shows 86 percent of respondents said they keep track of their income and expenses every month. That compares to 80 percent in both 2021 and 2020.

For the past five years, Debt.com has conducted its annual budgeting survey. The number of respondents who budget has increased each year. The majority say itâs helped them get out and stay out of debt, although 50% state they live paycheck to paycheck.

Before the pandemic, in 2018 and 2019, that number was right around 70 percent. “It’s quite likely that both inflation and the pandemic have made Americans keen to budget,” says Debt.com Chairman Howard Dvorkin, CPA. “It’s a one-two punch.”

It might be a one-two-three punch, since 47 percent of respondents were 45 or older. That means they were wage-earning adults during the Great Recession.

“We’ve noticed budgeting increases when financial stress increases â and tapers off when the stress does,” says Debt.com President Don Silvestri. “But we’re living in stressful times, so budgeting might be here to stay for a generation.”

It might seem counterintuitive, but the people with the least money are the ones who need to budget the most...

While only 17 percent of respondents cited inflation as the primary reason for budgeting, it still ranked third after the 40 percent who said they want to save more money and the 23 percent who budget to eliminate debt.

“It might seem counterintuitive, but the people with the least money are the ones who need to budget the most. If you don’t want to live paycheck to paycheck, the first step is figuring out exactly where that paycheck goes. Debt.com offers everyone a free debt analysis â and the first step is to create a budget,” advises Dvorkin.

About: Debt.com is a resource that offers consumers education, self-help guides, professional solutions, and more. On Debt.com, consumers can find expert money adviceâ how to make it, how to save it, and how to spend it. They also assist consumers by matching them with the perfect debt-solution company for their situation and making sure they are happy with the results. Debt.com has been featured in the Washington Post, Yahoo! Finance, Forbes, and more, making them a pillar of the debt relief industry.