How U.S. States Rank When it Comes to Financial Health

Florida jumps to number one, moving up five spots from 2016 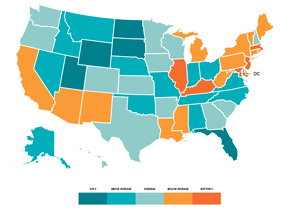 Eileen Norcross, an authority on state budgets and pensions, is the Director of the State and Local Policy Project at the Mercatus Center at George Mason University. Olivia Gonzalez is a Mercatus Research Associate.

ARLINGTON, Va., July 11, 2017 /PRNewswire/ — As Illinois and New Jersey flounder, one large state defies the fiscal odds, according to the newest edition of Ranking the States by Fiscal Condition, an influential academic study published today by the Mercatus Center at George Mason University.

Residents of struggling states like Illinois and New Jersey, meanwhile, can use this study to better trace the problems which have hamstrung their elected officials.

This peer-reviewed research is based entirely on states’ most recent audited financial reports. The authors combine these reports into one transparent database and compare them, allowing the public to see where each state stands.

High-ranking states have adequate cash at their disposal, revenues exceeding expenses, assets left over after debts are paid, and low unfunded pensions

High-ranking states have adequate cash at their disposal, revenues exceeding expenses, assets left over after debts are paid, and low unfunded pensions. Low-ranking states “remain stuck in place due to persistently large and growing liabilities.”

No state is without its financial problems, and there are limits to what rankings can tell us. They can, at the very least, make important-yet-complex information more accessible and provide a useful public service outlining potential economic and fiscal risks.

Excerpt from the rankings:

The financial health of each state can be analyzed through the statesâ own audited financial reports. By looking at statesâ basic financial statistics on revenues, expenditures, cash, assets, liabilities, and debt, states may be ranked according to how easily they will be able to cover short-term and long-term bills, including pension obligations.

This ranking of the 50 states, reproducedÂ from page 29 of the study, is based on their fiscal solvency in five separate categories: