Still,  One Fourth Save Nothing 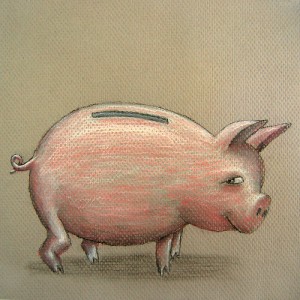 One-fourth of all Americans saved nothing, and younger and less affluent consumers struggle with more non-mortgage debt, according to a new study of household finance throughout life by Hearts & Wallets, the preeminent financial research resource for understanding consumer savings and investing needs and behaviors.

The study provides a current picture of U.S. household assets, income, replacement rates, spending, real estate assets and debt in an analysis of more than 5,500 U.S. households nationwide. Households with the primary breadwinner ages 40 to 52 (Mid-Career) saw the biggest gains in savings rate of any lifestage, going from 4.6 percent in 2013 to 6.0 percent in 2014.

Less affluent households, with less than $100,000 in investable assets, put away less than 5 percent in 2014, with higher-net-worth households saving more than 10 percent in the study, State of Retirement Funding and Household Finances in 2014: Income Sources, Savings, Spending, Debt, Real Estate & Retirement. An at-a-glance look a key statistics includes –

Averages can be misleading

“The increasing savings rate is good news, but averages can be misleading,” Laura Varas, Hearts & Wallets partner and co-founder, said. “People with less assets are struggling. It’s impossible to ‘save for retirement’ without first getting out from under debt.

Less affluent households, with less than $100,000 in investable assets, put away less than 5 percent in 2014, with higher-net-worth households saving more than 10 percent

The data provide insights into ways people can improve savings rates and how financial services firms can help by, for example, incorporating debt and real estate into the scope of savings advice.”

Tools boost savings by 20 to 50 percent

More than one-third of households use both technology and financial professionals for advice and information in 2014.

The Hearts & Wallets study shows households allotting 7 percentage points less of savings to employer sponsored plans in one year, dropping from 29 percent in 2013 to 22 percent in 2014. The recent Vanguard study How America Saves 2014 also finds eligible employee participation rates dipping from 74 percent in 2012 to 67 percent by year-end 2013.

“The dip may because the #1 financial goal in 2014 was to build up an emergency fund, followed by having enough money to work less, not retire per se,” explains Varas. “But employer-sponsored retirement plans are a great savings vehicle for millions of Americans, so we are currently analyzing the goals and reasons people use employer plans to find some explanations for the decrease. It may reverse itself next year, too, since more people are planning to use personal assets for income once they stop working, as shown in Retirement Reachability Ratio trends.”

This past year, the ratio remains similar to 2013 with a weighting increasing on both ends. Slightly more people are in the well-prepared group (80 percent or more of target assets) at 24 percent versus 23 percent in 2013, but also in the unprepared group (less than 20 percent of target assets) at 16 percent as compared to 14 percent in 2013. The RRR is grim for those in the Late Career lifestage, ages 53 to 64.

47 percent of Late Careers are at less than 40 percent of target assets. The median RRR fell dramatically in 2014 with an increasing portion of this lifestage expecting to use personal assets for income as they age (82 percent in 2014). Many plan to work as long as possible. “It’s never made sense to us that a healthy person of average means would spend decades at leisure,” adds Varas.

“The key is to be prepared for the day when employment slows or stops, and to use investments, real estate and debt wisely throughout life. This dataset makes possible a huge number of calculations about who’s doing what and best practices, so we are looking forward to continuing to use it in many creative ways to power all sorts of applications that will ultimately help the American consumer achieve better outcomes.”

About the Hearts & Wallets Study Methodology
State of Retirement Funding and Household Finances in 2014: Income Sources, Savings, Spending, Debt, Real Estate & Retirement analyzes attitudes and behaviors of investor lifestages from age 21 through post-retirement and is drawn from the Hearts & Wallets Investor Quant (IQ) Database. The IQ database platform serves as the engine for Hearts & Wallets annual reports as well as emerging trend analysis and consists annually of more than 2 million data points from 85 families of savings and investment questions asked during 40-minute interviews of 5,500 U.S. households. The integrated database engine now consists of more than 30,000 U.S. households over five years.

About the Hearts & Wallets®
Hearts & Wallets LLC is the preeminent financial research resource for understanding savings and investing needs and behaviors of American households. More than half of the top 10 retail financial services firms, in terms of assets under management and investors served, subscribe to the Hearts & Wallets Investor Quant (IQ) database engine platform with data on 30,000 U.S. households over five years. The firm’s integrated research platform combines consumer marketing and strategy frameworks with a deep, practical understanding of how the investment, retirement and banking industries function. Hearts & Wallets grows financial services client businesses by illuminating new, smart ways to truly help American savers and investors. Clients better understand the unmeet needs of distinct population segments, improve their products and services, gain a powerful competitive edge, and ultimately, enhance consumer lives. The company is headed by two of the leading research experts in retirement market trends for the financial services industry, Chris J. Brown and Laura Varas. Their studies and conferences are must-have resources for retirement industry strategists, product managers and marketing and sales executives. For more information, visit www.heartsandwallets.com.