Fitch Ratings survey delves into the current and future impact of the pandemic on the insurance industry.

Fitch Ratings-Chicago/New York-06 October 2020: Life insurer investment portfolio losses, which have generally been manageable amid the fallout of the pandemic, are expected to become more impactful to ratings in 2021, Fitch Ratings says. Impairments have ticked upward as the pandemic has caused widespread economic disruption and deterioration across most asset classes. However, Fitch’s surveyed universe of life insurer investment portfolios maintains stable, high-quality investment allocations, with fixed-income securities comprising the bulk of invested assets.

Liquidity in credit markets initially declined with the onset of the pandemic, while default expectations rose, causing further widening in credit spreads and, consequently, increases in opportunistic purchases. Credit spreads have since narrowed toward more recent averages due in part to U.S. governments’ fiscal and monetary responses.

Given the Fed’s outlook for lower, longer rates through 2023 as a result of the pandemic, investment yields are expected to remain pressured. In 2019, in order to combat the protracted low interest rate environment, insurers continued insurers continued to trade liquidity for yield, modestly increasing their exposure to less liquid asset classes such as private placements and commercial mortgage loans in lieu of public corporate bonds.

At 14% of invested assets, commercial mortgage loan exposure is material, with Fitch expecting losses to run approximately 50% higher than during the financial crisis. However, losses have yet to emerge, aided by temporary regulatory relief related to allowances for forbearance. The life insurance industry’s exposure to ABS, CMBS and non-agency RMBS totaled 13% of invested assets. Within this, the largest allocation was to ABS, nearly 45% of which were CLOs.

However, asset allocation has remained largely consistent, with fixed-income securities continuing to comprise the vast majority of life insurers’ portfolios. Within fixed income, the largest allocation is to corporate bonds (63%), which are primarily investment grade. 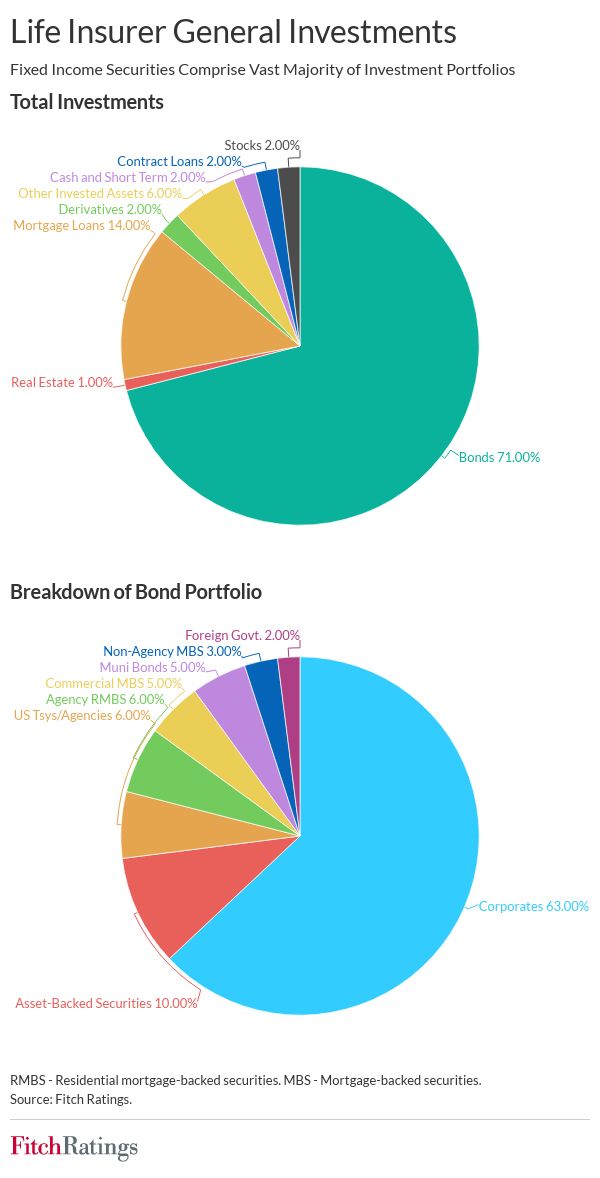 Expectations for high yield defaults have increased in 2020, with significantly exposed sectors including consumer cyclical, energy and transportation. Life insurers’ largest portfolio allocations are to the utilities, financials and consumer non-cyclical sectors.

As of August, Fitch forecast a 5%-6% corporate default rate for 2020 and a two-year cumulative base case default rate of about 15% by YE21. YTD, the current default rate is 4.4% and 34% of North American corporates carry a Negative Rating Outlook/Watch, up from 12% at the start of the pandemic, while 16% have been downgraded, with the majority by one notch.