Title IX: 50 Years Of Progress For Women, Yet Gaps Remain 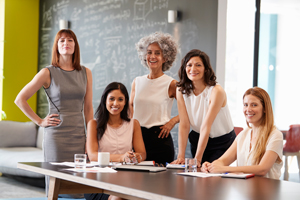 The TIAA Institute is releasing the insights to mark the 50th anniversary of the passage of Title IX, which prohibited sex-based discrimination in higher education.

âInvesting is the aspect of financial literacy with the largest gender gap, but notable differences also exist in borrowing, saving and insuring,â said Anne Ollen, who oversees the TIAA Instituteâs programs and operations. âThis underlines the importance of equalizing basic financial education in school and in the workplace.â

The report also documents the strong relationship between financial knowledge and financial well-being among women.

Compared to women with very high levels of financial knowledge, those with very low financial literacy are:

Trends In The Retirement Readiness Gender Gap Among TIAA Participants

Investing is the aspect of financial literacy with the largest gender gap, but notable differences also exist in borrowing, saving and insuring...

âThere are still considerable gaps in retirement readiness between men and women, but there has been noticeable progress over the last 50 years, due largely to the advances women have made in the workforce,â Ollen said. âPolicies that support paid parental and family leave and that help close gender pay discrepancies could narrow the gap even further, giving women more opportunities for a financially secure retirement.â

After 50 Years Of Progress, How Prepared Are Women For Retirement?

The final report, âAfter 50 years of progress, how prepared are women for retirement?â by the Center for Retirement Research at Boston College, looks at womenâs retirement readiness in the context of labor market and demographic changes. The analysis draws from the Health and Retirement Study, a nationally representative survey of people over age 50 conducted biennially since 1992, supplemented with earnings data from the U.S. Social Security Administration. The authors find that while the gender wage gap persists, womenâs progress in the workforce has enhanced their economic status, particularly for women who never married or mostly stayed single.

For instance, women who have spent most of their lives married look worse off than other women in terms of retirement preparedness compared to earlier cohorts, due in large part to the declining economic fortunes of their husbands. Mostly-single and never-married women have gained ground on those who are mostly-married due to the latter groupâs declining eligibility for Social Securityâs spousal benefit. The overall patterns are similar for both White and Black women.

About the TIAA Institute

The TIAA Institute helps advance the ways individuals and institutions plan for financial security and organizational effectiveness. The institute conducts in-depth research, provides access to a network of thought leaders, and enables those it serves to anticipate trends, plan future strategies and maximize opportunities for success. For more information about the TIAA Institute, visit www.tiaainstitute.org.

TIAA is a leading provider of secure retirements and outcome-focused investment solutions to millions of people and thousands of institutions. It is the #1 not-for-profit retirement market provider, paid more than $6.4 billion in lifetime income to retired clients in 2021 and has nearly $1.3 trillion in assets under management (as of 3/31/2022).