Nationwide lays out how often people are distracted behind the wheel 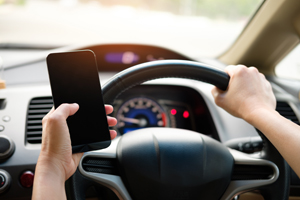 COLUMBUS, Ohio, April 26, 2021 /PRNewswire/ — Consider what you would do if you were driving down the road at 45 mph and lost visibility for six secondsâbarreling forward, no breaking, no slowing down, no ability to see. This is essentially what happens 13 times a day for the average driver according to new data released by Nationwide.[1]

“What kind of damage could be caused in those six seconds? It may seem dramatic, but this ‘driving blind’ is happening every day on our roadways in the form of distracted driving,” said Nationwide’s Beth Riczko, president of P&C personal lines. “According to data obtained from our SmartRideÂ® telematics program, the average participant is taking their eyes off the road too many times, for too longâcreating a danger for themselves, their passengers, pedestrians, and others on the road.â

While a close call behind the wheel can be an eye-opening experience, it doesn’t always change driving behavior. 45% of every trip taken has a driving distraction, and over 70% of people are distracted at least once while driving each day. In September 2020, Nationwide’s SmartRide mobile app started showing drivers when and how they were distracted by their phones.

The distraction trends uncovered are alarming:

“We’ve introduced an experience that provides customized feedback on phone distractions and it’s helping to reduce distracted driving on our roadways. The reality is that too many drivers are multitasking behind the wheel, putting themselves and others at risk. The good news is drivers are willing to change their behaviors,” said Riczko.

What kind of damage could be caused in those six seconds? It may seem dramatic, but this 'driving blind' is happening every day on our roadways in the form of distracted driving...

Nationwide has taken a strong position on distracted driving. Nationwide CEO Kirt Walker announced last year the company’s advocacy for all 50 states to adopt hands-free, primary enforcement laws to curb distracted driving. States that have adopted these laws have seen a 15 percent decrease in fatalities. Nationwide is also seeking the adoption of model legislation by NCOIL, the National Council of Insurance Legislators, as part of its efforts.

The company is also providing distracted driving feedback to drivers through its SmartRide[2] Mobile program, which is changing driving behavior. In less than a year, there has been a 10 percent reduction in everyday hand-held distractions among these drivers. The goal of providing feedback on phone use while behind the wheel is to increase drivers’ awareness on the frequency of this behavior and reduce crashes associated with distracted driving.

About Nationwideâ¨Nationwide, a Fortune 100 company based in Columbus, Ohio, is one of the largest and strongest diversified insurance and financial services organizations in the United States. Nationwide is rated A+ by both A.M. Best and Standard & Poor’s. An industry leader in driving customer-focused innovation, Nationwide provides a full range of insurance and financial services products including auto, business, homeowners, farm and life insurance; public and private sector retirement plans, annuities and mutual funds; excess & surplus, specialty and surety; pet, motorcycle and boat insurance. For more information, visit www.nationwide.com. Follow us on Facebook and Twitter. Nationwide, Nationwide is on your side and the Nationwide N and Eagle are service marks of Nationwide Mutual Insurance Company. Â© 2021

[2] Availability varies; program criteria differs in California and North Carolina. Stated discounts are approximations. Discounts do not apply to all coverage elements; actual savings vary by state, coverage selections, rating factors and policy changes. Enrollment discount applies during data collection; final discount is calculated on driving behavior and could be zero. Final discount applies at the next policy renewal and is subject to change based upon actuarial support at subsequent renewals or with changes in drivers or vehicles on the policy.