The Relativity of Risk 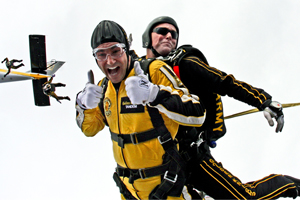 A personâs view of whatâs risky is a highly relative thing. For instance, jumping off a mountain with nothing but a wingsuit to fly along wind currents may seem perfectly safe to some people. Granted, itâs a minority, but there are people who literally throw caution to the wind.

Â Meanwhile, crossing a city street without a green walk signal can strike fear in many others. The quickened pace of jaywalkers as they hustle across an urban boulevard is a telltale sign of anxiety.Â Â Itâs much the same when it comes to Americansâ views of taking risk with their retirement savings, according to MassMutualâs recent research1. It seems many retirement savers and their advisors view risk from different lenses.

Risk is highly relative in that itâs viewed differently by different retirement investors based on a range of factors, including individual goals, time horizon, sensitivity to market volatility and â perhaps more important â their understanding of the risks they are taking. While different investors may view risk differently, financial advisors need to take special care to help ensure pre-retirees and retirees are not jumping off a cliff when they think theyâre merely stepping down a few stairs.

Â MassMutualâs research shows that both retirees and pre-retirees express concerns about protecting retirement savings from stock market downturns and worry about deep losses. Meanwhile, many pre-retirees and retirees describe their primary investment strategy as focused on either âaggressive growthâ or âmoderate growth.â

Â On the surface, capital preservation seems like an overwhelmingly desirable investment objective. Nine out of 10 retirees (92 percent) and pre-retirees (94 percent) âstrongly agreeâ or âsomewhat agreeâ that itâs important to take steps to avoid major stock market losses right before or right after retirement, according to theÂ MassMutual Retirement Savings Risk Study. Nearly half of pre-retirees (49 percent) and one in three retirees (32 percent) express apprehension about taking too much investment risk, the study finds.

Â The internet-based study was conducted on behalf of MassMutual by Greenwald & Associates and polled 801 retirees who have been retired for no more than 15 years and 804 pre-retirees within 15 years of retirement. Pre-retirees were required to have household incomes of at least $40,000 and retired respondents had at least $100,000 in investable assets and participated in making household financial decisions. The research was conducted January 2018.

Â When study respondents are asked about which of two investment theories they subscribe to â becoming significantly more conservative as they approach or enter retirement, or not becoming substantially more conservative â respondents lean towards conservatism. But based on the description of their asset allocation strategies above, some people may be taking more risk than they realize.

Whatâs An Advisor To Do?

Did any of these retirement savers or spenders consult a financial advisor? What do advisors recommend?

Â Whatâs an advisor to do? How can advisors help clients better understand and manage the risks they face in the marketplace? How can advisors prevent their clients from falling down a mountain crevice when all they really want is to take a leisurely stroll across the street?

Â One way to start is by focusing on education. Advisors may help retirement savers by diving more deeply into the relative risks created by different asset allocation strategies. Educate clients by demonstrating a stochastic or Monte Carlo simulation of how different allocations to equities, fixed interest and non-correlated assets respond to different market conditions. Watching a portfolio of growth stocks plunge during a market correction and then rise again as markets recover can be a real eye-opener for some clients.

Â Whether flying in a wingsuit or saving for retirement, the end goal should be the same: a safe landing for retirees and their investments

Â Connecting training wheels to a retirement saverâs risk management and corresponding asset allocation strategy may also be helpful. Including target date funds (TDFs) or managed accounts to a plan sponsorâs retirement plan investment lineup offers savers more options to automatically shift assets to more conservative investments as they approach, enter or live in retirement, generally offering a degree of protection from volatile markets. TDFs may be a simple and easy way for retirement savers to not only help achieve their goals but to help manage their investment risk.

Â Generally, many retirees and pre-retirees are open to investing in TDFs. MassMutualâs research showed that many respondents viewed TDFs as potentially beneficial, especially if the investor lacked the discipline or time to adjust his or her investments. Sixty-six percent of pre-retirees and 44 percent of retirees agreed that TDFs would help, according to the study.

Â However, actual usage of TDFs is relatively low among these groups. Only 29 percent of pre-retirees and 20 percent of retirees indicated they currently invest in TDFss (orÂ  invested in TDFs at the time they retired), the study finds. Twenty percent of both groups were unsure.

The use of customized strategies in which a money manager allocates assets based on factors such as age, risk tolerance and other investments was also low, with 23 percent of pre-retirees and 31 percent of retirees answering in the affirmative.

Â Those preferences and others may put a premium on advisors being able to offer a range of different TDF styles and approaches. Among these are passive, active or a combination of investment styles to accommodate different goals.

Â Glide paths are a big consideration, especially when it comes to managing risk and addressing individual risk tolerances. One of the biggest decisions that advisors and plan sponsors must make about a TDF family is whether a âtoâ or âthroughâ glide path strategy makes the most sense. The question has been a cause for intense debate within the investment community and has exposed real philosophical differences about long-term investing.

Â Conversely, âthroughâ strategies generally adopt a more aggressive posture and maintain higher equity allocations for pre-retirees and newly minted retirees. Then, as the retiree lives longer in retirement, exposure to equities is dialed back.

Â Increasingly, TDFs are offering multiple glide paths within a single fund family, giving investors more choices in the recognition that one size may not fit all.

Â Whatever the preference for TDFs, risk is a critical consideration for both retirement savers and their advisors. TDFs and customized investments may be a good solution for many people to better manage risks, whether they need to take more or less risk, are still working or retired, or simply need help allocating their assets as they move throughout their investment life.

Â Like wingsuits, the concepts behind TDFs and more customized strategies are not new. Thrill seekers have been tossing themselves off high objects in nothing more than an extra baggy suit for more than 100 years. Itâs only been 25 years or so since the first really effective wingsuit that allowed more maneuverability was developed and itâs been about 20 years since safety training was required by fliers.

Â Whether flying in a wingsuit or saving for retirement, the end goal should be the same: a safe landing for retirees and their investments. â

Past performance is no guarantee of future results.

Investments in these options are not guaranteed and you may experience losses, including losses near, at, or after the target date. Additionally, there is no guarantee that the options will provide adequate income at and through retirement.