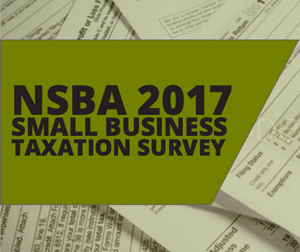 “Today, we have the first real chance for broad tax reform in a generation,” stated NSBA President and CEO Todd McCracken. “However the overwhelming majority of small businesses believe Congressional failuresâpartisanship and a lack of effortâare the biggest challenge facing reform, and one-third don’t believe tax reform will ever be enacted.”

Among the survey’s findings: the majority of small businesses say that administrative burdens are actually a bigger problem than the financial cost of federal taxes; and one-in-three small businesses report spending more than 80 hoursâtwo full work weeksâeach year on federal taxes. The survey also asked about sales tax, payroll taxes and deficit reduction, and ranked the most problematic taxes as well as the most useful deductions.

When asked about tax policy, the most broadly-supported tax reform is one that would reduce taxes and deductions for both corporations and individualsâno surprise given the majority of small businesses (83 percent) are pass-through entities and therefore file business taxes at the individual tax level. Furthermore, since the majority of small businesses don’t export or import, 67 percent said that a border-adjusted tax system would have no direct impact on their business.

“The number-one tax related concern of small businesses today is the possible elimination of deductions and credits without an offsetting reduction in tax rates,” stated NSBA Chair Pedro Alfonso of Dynamic Concepts, Inc. in Washington, D.C. “The need for broad tax reformâand not just a tinkering here and thereâis a real need for millions of American small businesses.”

While the first real chance for broad tax reform in a generation hangs in the balance in Congress, small-business owners across the country are united in the stress and frustration associated with the countless hours and mountains of paperwork required to file their federal taxes. The federal tax burden is consistently ranked among the top issues facing small business, and one-in-three small businesses report spending more than 80 hoursâtwo full work weeksâeach year on federal taxes.

NSBAâs surveys aim to provide those members, policymakers, thought leaders and the media with critical data on the small-business community. While the financial tax liability for small firms is a huge issue, administrative complexity continues to pose an even bigger problem. In ranking the most significant challenge to their businesses posed by federal taxes, the majority of respondents, 58 percent, picked administrative burdens.

Sixty-seven percent of small business owners report spending more than $1,000 each year on the administration of federal taxes. The overwhelming majority of small firms, 84 percent, are forced to pay an external tax practitioner or accountant to handle their taxes. Federal taxes have a significant to moderate impact on the day-to-day operation of the majority of small businesses. No surprise, payroll taxes and income taxes were ranked the top two most burdensome taxes for small businesses. The administrative headache of employee tax withholding and reporting likely drives the fact that the majority of firms with more than five employees now use an external payroll company. When it comes to tax policy and tax reform, the most broadly-supported tax reform is one that would reduce tax rates and deductions for both corporations and individuals.

Given the widespread discussion on Capitol Hill regarding tax reform, we asked about small businessesâ concerns with potential proposals. The number one tax-related concern of small businesses today is the possible elimination of deductions and credits without an offsetting reduction in tax rates. One of the most talked-about proposals in recent months is the implementation of a border-adjusted tax system which we found wouldnât directly impact the majority of small businesses given the fact that most donât export or import.

Perhaps the biggest take-away in our policy section was the broad pessimism expressed in the likelihood that tax reform will actually happen. The overwhelming majority of small businesses believe Congressional failuresâ massive partisanship and a lack of effort or support to move legislationâare the greatest impediments to enacting broad tax reform, not the actual policy. Furthermore, the majority of small businesses believe tax reform will never be enacted or are simply unsure. Unfortunately, the current U.S. Tax Code is becoming an insurmountable hurdle for the growth of existing businesses and creation of new firms.

As such, NSBA has embraced nine principles that any responsible comprehensive tax reform package ought to incorporate, which are included at the end of this survey packet. Conducted online March 8-30 among 950 small-business owners, we hope this survey provides timely and useful information on how taxes are impacting Americaâs small business community. Please contact NSBAâs media department with any questions.

Celebrating 80 years in operation, NSBA is a staunchly nonpartisan organization advocating on behalf of America’s entrepreneurs. NSBA’s 65,000 members represent every state and every industry in the U.S. Please visit www.nsba.biz or follow us at @NSBAAdvocate.