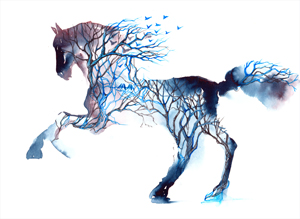 The demographic known as Millennials â those born between 1980 and 2000 â has been much maligned in some quarters for being a âlive now, pay laterâ generation. Whether itâs grabbing the latest iPhone upon its release, buying the ârightâ car, or splurging on a vacation abroad, this is a cohort that is often assumed to place lifestyle over substance.

Perhaps Millennials are not all that different from preceding generations of âyoung professionals,â whose own first few significant paychecks were often spent on a new television, motorcycle or a trip to the big city. But when it comes to retirement savings, as we all know, the old saw âSave early, save oftenâ is perennial advice â¦ and, unfortunately, perennially under applied.

The financial advisor and radio host Dave Ramsey perhaps said it best when he described money in his book Financial Peace Revisited as âlike a beautiful thoroughbred horse — very powerful and always in action, but unless this horse is trained when very young, it will be an out-of-control andÂ dangerous animal when it grows to maturity.â
There are of course exceptions to every rule, but the first Pentegra Millennial Savings Survey conducted in 2017, while showing some surprisingly encouraging trends, also included some results that unfortunately back up the pervasive Millennial stereotype.

How important is saving?

To be fair, our findings did include some heartening signs. Over 80 percent (81.37 percent) of respondents said they are currently saving for retirement, and well over one-third (37.25 percent) said they are putting at least 5 percent â our recommended amount â of their salary into a retirement savings vehicle.

The importance of saving for retirement was further underscored by the whopping 78.43 percent who said that they look for a company that provides retirement benefits when job-seeking. While most large companies offer a 401(k) with an employer match and/or other retirement plans, this should serve as a wake-up call for smaller firms that may be undersupplying â or not offering at all â some kind of retirement benefit plan.

However, the popular stereotype of Millennials as a âspend nowâ subculture cannot be ignored. Nearly a third (31.38 percent) said they spend $75 or more per week on eating out or ordering take-out (including coffee, lunch and dinner) â money that could of course pay greater and more far-reaching dividends in a 401(k), IRA or other retirement-focused savings account.

All of those are serious factors to consider, of course â¦ but in the face of the well-documented retirement savings crisis that the United States faces as a whole, we believe that Millennials should consider reordering their priorities.

Following a round of written responses from survey participants around the country, Pentegra independently interviewed a number of respondents for additional information designed not only to further illuminate our surveyâs findings, but also to provide insight about their spending habits, savings strategies, and thoughts on retirement â as far away as that life change may seem to them.

Respondents were questioned on a number of topics surrounding saving for retirement: How they are approaching the subject, how important they view saving for what presumably will be a far-off new stage in their lives, and what advice they have for their fellow Millennials were all key components of our conversations.

Respondents were drawn from a diverse pool, ranging from financial industry professionals to those working in the education, sales and marketing fields â plus full-time students and even one person who is currently unemployed.
It should be noted that all of our subjects had either completed or were in the midst of completing a college education, something that ostensibly gives them a leg up over those of similar age who are entering their careers without such advantages. However, as is too often true, an education does not necessarily nullify a lack of what we believe is common sense when it comes to saving for retirement.

A key concern for Pentegra is that younger generations are not saving enough for retirement â an assertion that independent data unfortunately backs up. As reported by Bloomberg on February 21, 2017, the U.S. Census Bureau estimated that nearly two-thirds of American workers are not saving in a 401(k) or similar tax-deferred retirement plan. And that is only if their employers offer such plans; according to the Bureau, only 14 percent do â and most of them are large companies.

An April 9, 2017 report by The Motley Fool added fuel to the retirement savings fire: According to the St. Louis Federal Reserve, it said, âthe personal saving rate in February 2017 was just 5.6 percent, implying that workers were putting away just a little over $1 into savings or investments for every $20 earned. In February 1967, 50 years ago, the personal saving rate was a healthy 12.4 percent, essentially in between the recommended saving rate by advisors of 10 percent to 15 percent of your annual income. Without an adequate amount of savings, consumers run the risk of running out of money during their retirement, which is a common fear among workers.â

And the picture does not get any brighter when it comes to Millennials. The Motley Fool report cited data from the Citizens Financial Group that found that college graduates under the age of 35 are spending nearly a fifth of their income on paying off their student loans.

The average 25-year-old Millennial is probably going to work for another 40 to 45 years before he or she retires. According to The Motley Fool: âDuring this period, inflation is likely to motor along at roughly 2.5 percent per year, which is conservatively 1 percent below its 100-year average. After 45 years, inflation will have chipped away at your $1 million nest egg and pushed its real-money value to $400,000 or less. For those looking to live on $500,000 or $250,000, a 2.5 percent inflation rate over 45 years could push the real-money value of your nest egg to under $200,000 and $100,000, respectively.â

âA lot of people my age, including some of my friends, find it easy to spend what they have when they get it,â said one of our interviewees, a middle school teacher in Tampa, Florida. âRetirement for a person my age is years and years away. It seems hard to plan for developments that are 40 years down the road.â

Prior to the survey, Pentegra was concerned that the stereotypical Millennial spendthrift was in fact a reality â¦ something that unfortunately our findings confirmed. As noted earlier, nearly a third (31.38 percent) said they spend $75 or more per week on eating out or ordering take-out (including coffee, lunch and dinner), some of which could pay significant dividends if invested for retirement.

To provide a real-life example of this: If we estimate that a gourmet cup of coffee costs $5 a pop, and one purchases such a cup five days a week over an average of 260 work days a year, thatâs $1,300 a year â a significant amount, especially for someone just starting their career whose salary is presumably on the low end. Multiply it by 40 years of active work, and you have spent $52,000 in constant dollars; assuming a 6 percent compound annual growth rate, and it comes to a whopping $152,000 total.

Pentegra is not suggesting that everyone ditch their coffee habit â¦ but perhaps skipping it occasionally, or relying on a non-gourmet brand from time to time, is more prudent.

Time and again, respondents blamed a lack of financial education for their uncertainty â or disinterest â in saving for retirement. Conversations with family members while still living at home were often perfunctory or even non-existent, and many thought that at least an hour at the high-school level (or even before) spent talking about the rudiments of saving money could go a long way in addressing the problem â¦ one that can follow them into their careers.

âIf we educate new employees that have never had a 401(k) account, then maybe they will see the importance of what itâs really there for,â offered a consultant in White Plains, N.Y.Â âAt my first job that offered a 401(k), I didnât contribute, the reason being I didnât know what it was for and the benefits of it.â

The door is thus wide open for financial advisors. By building on what (if anything) a Millennial already knows about retirement savings, by doing something as simple as patiently explaining how a 401(k) works, how to create a workable budget, and showing them how to calculate what amount theyâll likely need to sustain their expected quality of life in their golden years, an advisor can easily win a client for life â¦ not to mention other friends and family members of their clients.
Itâs definitely time to tame Dave Ramseyâs horse, once and for all. â