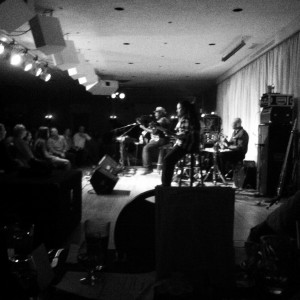 Shirley, Ma. Feb. 6, 2013- Taj Mahal played a room for 300 tonight at the Bull Run Restaurant in Shirley, cradling his plugged-in acoustic that he can make sound like a steel-guitar or can ramp up to sound like an electric. Accompanied only by his bassman, Bill Rich, and his drummer, Kester Smith, touring as The Taj Mahal Trio,Â  Taj was able to exhibit his most gifted instrument, his voice, as he at times would only sparsely hit the strings but still create a full, rich sound.

The trio allowed Taj to exhibit his most gifted instrument, his voice, as he at times would only sparsely hit the strings but still create a full, rich sound

He led off with Fishin’ Blues and Corinna, to the crowd’s delight, and before anyone knew it, two hours flashed by. The set featured Honey Bee, a romping rendition of Blues with a Feeling and a loud but tight Stagger Lee, as it should be played.Â  Toward the end of the set, the boys simmered it down with some very fine and mellow instrumental work featuring Taj on banjo. For the encore, however, it was a half-hour of raucus, rockin’ cajun blues that certainly left everyone singing The Mood is Good on the drive home. The old boy may be moving a little slower these days, but once on stage, he remains one of the most gifted and engaging showmen.

The Bull Run Restaurant is a fantastic venue for shows like this: a comfortable room with table seating and dining services that, when filled, gives the feel of a concert but with a palpable intimacy. There isn’t a bad seat in the house.