Survey: American Businesses are Showing Some Reluctance to Deploy Cash

But their finger is on the trigger… 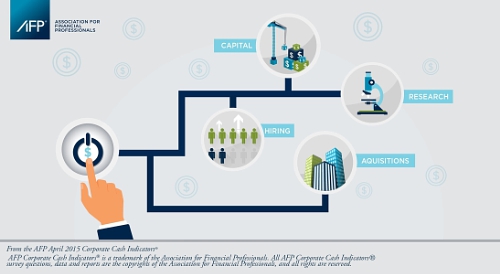 BETHESDA, Md., April 27, 2015 /PRNewswire/ — Companies expect to decrease their cash holdings in the coming quarter for the third consecutive quarter, according to the AFP Corporate Cash Indicators ® (AFP CCI).

However though willing, companies are exhibiting some signs of caution and are taking a wait-and-see approach before committing to investing cash. AFP began collecting quarterly data in January 2011 and has now collected 18 data sets. See www.afponline.org/CCI for answers to frequently asked questions.

The next set is slated to be published July 27, 2015. This is the first time the CCI, which debuted in January 2011, found that firms anticipate decreasing cash holdings for three straight fiscal quarters. Published each fiscal quarter by the Association for Financial Professionals (AFP), the AFP CCI measures changes in corporate cash holdings quarter-to-quarter and year-over-year, as well as the expected change in short-term investment and cash accumulation in the coming quarter.

The CCI is underwritten by Capital One Bank. "As the CCI suggests, we see clients continuing to exhibit an interest in spending cash when the opportunity presents itself," said Pasquale Nuzzo, Senior Vice President for Capital One Bank's Treasury Management Group. "That eagerness is tempered, however, by some of today's economic realities, and market uncertainty may continue to affect companies' cash use in the near future."

Businesses' willingness to deploy cash decreased in Q2 15 compared to Q1 15. This is likely due to the rising value of the U.S. dollar, a particularly harsh winter across America, and a labor dispute that slowed traffic at West Coast ports.

The latest CCI found that for the second quarter in a row, organizations' actual behavior has not aligned with their expectations entering the quarter. It is likely that even modest improvements in economic or regulatory conditions could open corporate wallets for hiring, capital investment and acquisitions.

"Treasury and finance professionals are telling us loud and clear that their organizations are ready to unleash their cash," said AFP President and CEO Jim Kaitz. "However, they need an economic or monetary trigger for them to do so."

The indicators measure recent and anticipated changes in corporate cash balances by calculating increase percentage minus decrease percentage. Each quarter, AFP asks select members representing a broad cross section of U.S. businesses the same questions: whether their company's short-term holdings increased or decreased in the past year and past quarter; whether investment selections for those holdings changed; and whether they expect cash holdings to increase or decrease in the coming quarter.

AFP member companies have agreed to participate in this ongoing study on a long-term basis. Participants manage their companies' cash and short-term investment portfolios and are fully aware of their companies' liquidity needs and business strategies. Since corporate decisions to grow/shrink the size of cash and short-term investment portfolios reflect their business outlook and direction, changes reported by this broad group of companies are indicators of economic activity.

ABOUT AFP®
Headquartered outside Washington, D.C., the Association for Financial Professionals (AFP) is the professional society that represents finance executives globally. AFP established and administers the Certified Treasury Professional and Certified Corporate FP&A Professional credentials, which set standards of excellence in finance. The quarterly AFP Corporate Cash Indicators serve as a bellwether of economic growth. The AFP Annual Conference is the largest networking event for corporate finance professionals in the world.