Sukuk Bonds: Where the Smart Money is Headed?

Conventional bond behavior, though with a IslamicÂ structure

In today’s upside-down economic environment, tepid stock markets and negative interest rates in parts of Europe and Asia mean that neither equities nor bonds has provided the kind of performance many would like.

Where can one look for an acceptable return?

The answer may be sukuk bonds. Global dollar sales of sukuk climbed to $14 billion this year, a record for the period. Issuance over the past several years has grown to meet the demands of not only Muslim investors in Gulf Cooperation Council (GCC) nations and parts of Asia, but also institutional investors in the developed world.

This unconventional instrument, which behaves in ways similar to a conventional bond in terms of payment priority but has an Islamic structure, is now basking in the spotlight as more conventional players start to pile in.

Increased attention paid to sukuk can be traced back to the recent drop in commodity prices. Export-oriented countries in need of U.S. currency to manage widening current account balances are often forced to borrow in dollars. That means more dollar-denominated sukuk issuances from those countries.

Because of a flood of sales, yields have climbed in recent months to entice buyers. According to JP Morgan, the average yield on sukuk from the Middle East climbed to a five-year high of 5.25% in January.

The higher cost of borrowing hasn’t deterred commodity-producing governments, however. Data from Bloomberg show that Indonesia, a major palm oil and rubber exporter, paid nearly a quarter of a percentage point more than it did a year ago on its 10-year sovereign sukuk bonds issued in March, bringing the current yield to 4.55%. 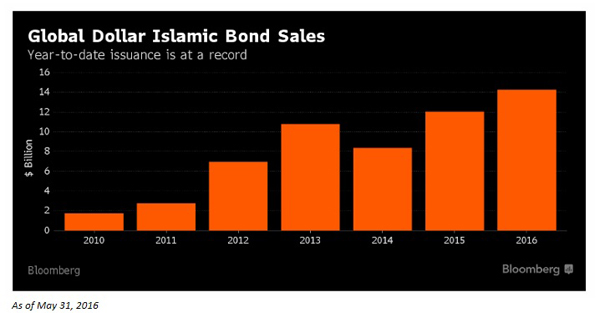 In addition to slumping commodity prices, limited investor participation relative to the larger bond universe has led to liquidity issues and wider yield spreads. But the era of higher borrowing costs compared to conventional bonds may be nearing an end if certain factors play out.

Chief among those is reported interest by JP Morgan to include sukuk instruments in its suite of emerging market indices. Such a decision would likely mean not only tighter spreads but an even larger investor base since many emerging market investors abstain from bonds not included in indices.

This is especially the case for sovereign credits. Analysts expect that emerging market sovereign sukuk would benefit most from inclusion in an index. An estimated $300 billion in assets track emerging market bond indices, and $120 billion is earmarked for sovereign or quasi-sovereign bonds. A sizeable portion of this subtotal could be allocated to sukuk should JP Morgan choose to move forward.

According to strategists at Standard Chartered bank, those Indonesian sovereign sukuk bonds mentioned earlier would likely benefit most from inclusion in the JP Morgan indices. The country currently has $9.5 billion outstanding, which translates into a full percentage point increase in index weight in both the EMBI Global and JACI, two widely followed indices focused on emerging markets.

Analysts also expect GCC countries to benefit from index-eligible sukuk bonds, where a third of dollar-denominated sales originate, but Southeast Asia, they say, stands to see the biggest gains.

Export-oriented countries in need of U.S. currency to manage widening current account balances are often forced to borrow in dollars

Today, sukuk investors enjoy the advantage of a maturing asset class that is drawing attention from big money players. And prospects for the future could mean even greater demand and exposure for the instrument. In an era in which global central bank policies have distorted markets and stymied investors for what could turn out to be a significant time, sukuk bonds have the potential to outlast short-lived publicity and thrive longer term courtesy of growth-conscious investors in the global marketplace.

You should consider the Fundâs investment objectives, risks, charges and expenses before investing. A prospectus with this and other information about the Fund is available online at www.azzadfunds.com/prospectus or by calling 888-86-AZZAD. Please read the prospectus carefully before investing. Azzad Asset Management is the investment advisor to the Azzad Funds. The Funds are self-distributed.

The opinions and views expressed herein are current as of the date indicated, are subject to change without notice, and do not take into account particular investment objectives, financial situation or the needs of individual investors. They are not intended to be relied upon as a prediction or forecast of actual future events or performance, guarantee of future results, recommendations or advice. Statements made in this material are not intended as buy or sell recommendations of any securities. Forward-looking statements are subject to uncertainties that could cause actual developments and results to differ materially from the expectations expressed. This information has been prepared from sources believed reliable, but the accuracy and completeness of the information cannot be guaranteed.