The Burdens And Barriers Of Income Planning

Going forward, inflation will look more like the last decade than the past year 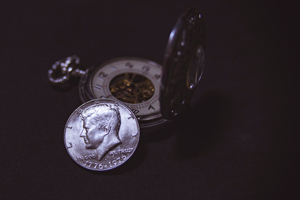 For just about all of the past decade, low inflation has persisted, suppressing bond yields and supporting stock valuations. We have called this trend Stuckflation, which long frustrated central banks struggling to reach their inflation targets of about 2%.

But in 2021, Stuckflation has been put to the test by current inflation, which has surged north of 6% in the U.S. and put central banks in an unusual position. Our top concern is the risk of disruptive inflation leading to premature monetary policy tightening by central banks in the form of higher rates, triggering volatility in stocks and bonds.

While we recognize this risk, we are sticking to our Stuckflation view â that going forward inflation will look more like the past decade than the past year.

The primary force behind Stuckflation â where long-term inflation has stayed well below 2% â has been technology that has enhanced productivity. Indeed, one pandemic outcome has been the fuller realization of the power of technology. Many in-person meetings have been replaced by webcasts, and labor shortages can be addressed through automation. We think the disinflationary forces of technology will persist and eventually overwhelm the temporary inflationary pressures from the supply-chain and labor disruptions weâre seeing now. Keep in mind that massive government stimulus has contributed to demand that drives inflation, and that stimulus is waning. So, while that âdemand enablerâ dissipates, we think the âsupply enablersâ of technology introduced during the pandemic will continue, settling down inflation into 2022.

Initial inflationary pressure came from the goods sector, but has now transitioned to energy price pressures and supply chain bottlenecks. There is some evidence of improvement in key areas of concern like shipping, while pressures in housing prices and wages remain a concern. Our view that inflation in 2022 will be âunderâ market expectations reflects our belief that investors will discount declining inflation by the end of the year. We expect U.S. inflation to recede below the consensus expectation of 3.7%.

After surging higher in 2021, we expect European inflation to drift back down to roughly 2% as the impact of tax changes and higher energy prices fade. We foresee inflation in the U.K. being somewhat stickier but still declining to a range of 2.5â3%. For Japan, we expect inflation of just 0â1%. These views reflect the fact that we donât expect the recovery-induced price increases to repeat in 2022. Finally, Chinaâs inflation will remain a focal point of the government and as such will in all likelihood stay rangebound at 1.5â2.5%. Of course, thatâs quite low given the underlying price pressures present in the country, but for now the government is clear it is focused on supporting the consumer even if it comes at the expense of the producer.

The lockdowns in 2020 created the largest drop in global GDP since World War II, while the subsequent recovery has brought the fastest growth rates experienced in 50 years...

Central Banks in Transition with Inflation

Monetary policy globally will be transitioning from pandemic-related support to a more traditional framework in 2022. The lockdowns in 2020 created the largest drop in global GDP since World War II, while the subsequent recovery has brought the fastest growth rates experienced in 50 years. Inflation in 2021 was well above forecasted levels, and over the coming quarters policymakers will vigorously debate inflation prospects. The output gap (how far current gross domestic product is below potential) took eight years to close following the global financial crisis, supporting a low-inflation environment.

Strong economic reports will raise concern about a quicker-than-expected closing of the output gap. In this way, economic âbad newsâ of slower growth could be well-received by financial markets. The Federal Reserve has already indicated that it intends to complete the tapering of its bond buying program in 2022 â potentially accelerated by continued high inflation. We do note, however, that an expected decline in Treasury issuance should offset this negative technical factor. We anticipate one rate hike in 2022 from the Fed, and believe the market has priced in too many (roughly 5) hikes by the end of 2023.

The European Central Bank (ECB) is expected to keep monetary policy easy as inflation is driven by a narrow set of temporary drivers. It will taper its quantitative easing program during 2022 but we do not foresee any rate hikes. We think the Bank of England will start hiking rates in 2022, but it will probably move slowly and cautiously and hike no more than twice. The Bank of Japan will likely remain highly accommodative and Japanese interest rates across the yield curve will remain anchored close to zero. In China, the central bank will gradually ease monetary policy to support domestic economic growth.

We do not foresee big moves, however, but rather incremental adjustments based on economic need. Overall, we view monetary policy in the U.S., Europe and China as dovish and donât foresee a level of monetary policy tightening that will be disruptive to either economic growth or the financial markets. 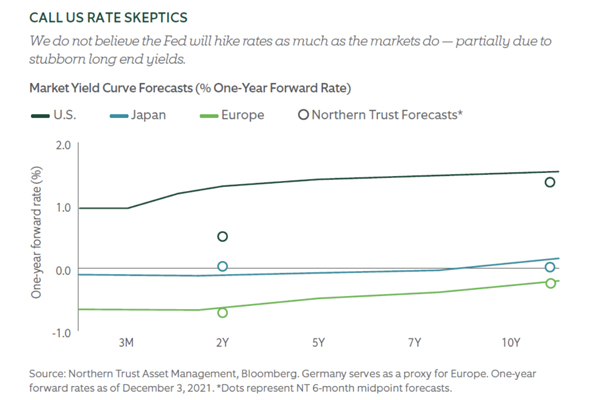 A Long View on Interest Rates

Treasury yields operated in a fairly volatile manner in 2021. Initial optimism surrounding vaccines and economic re-openings led to a steep rise in longer rates during the first quarter. Consumer strength, large fiscal stimulus and global economic reopening led to a faster than expected recovery. Interestingly, longer rates then proceeded to fall, even as inflation data and economic growth rates reached some of the highest levels in decades.

Most investors saw this as a signal that economic data would mean-revert and there would be a lower terminal Fed funds rate once the Federal Open Market Committee (FOMC) eventually begins to tighten. In the back half of the year, global central banks began to awaken to inflation pressures and indicated a tightening cycle might be near. This time, front end rates bore the brunt of the selling as the FOMC indicated it might be time to reduce extraordinary measures and make sure the inflation genie does not escape the bottle. Back end rates stayed below the March peak given limited investor expectations for higher longer term inflation and a prolonged tightening cycle.

As we head into 2022, central banks have started to reel in emergency stimulus measures. Although the Fed maintains that a reduction in its balance sheet is separate from tightening, it has mentioned that inflation is lasting a bit longer than policymakers had hoped. The central bank is monitoring the situation carefully. Although front end rates will likely experience volatility around monetary policy developments and COVID-19 variants, back end rates should remain stable at historically low levels. Inflation expectations have come well off their peaks, though they do remain elevated near long-term highs.

We expect inflation to begin declining as the year proceeds. Fiscal stimulus will likely move from a tailwind to a headwind, which should limit back end rate moves. Risks to our view remain three-fold: (1) If the economy is stronger for longer, then perhaps the timing and length of a tightening cycle will need to be reevaluated (affecting front end rates and longer term premiums); (2) if inflation remains sticky, then we would also look at our front end rate exposures; and (3) conversely, if central banks revert to their old playbook, we would expect a flatter yield curve as long rates rally. In any case, we expect longer dated rates to remain lower for longer.

The Critical Path of Inflation

Of the transitions the markets will wrestle with in 2022, this test to Stuckflation will be the most impactful and carries the highest risk. Market expectations are that inflation will start to moderate in 2022 but the implied five-year inflation rate priced into markets is a still high 2.8â2.9% for the U.S., moderating to 2.4% over the following five years. The path of inflation during 2022 will be critical to the transition of central bank policy, as the Fed considers accelerating its tapering of bond purchases in response to higher than expected current inflation.