Strong Support for the Penny in Recent Poll

More than two-thirds of Americans (68%) want to keep the penny, according to a poll released by Americans for Common Cents (ACC). 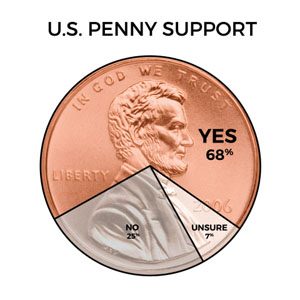 Apr 29, 2019 — WASHINGTON–(BUSINESS WIRE)–Over two-thirds of Americans (68%) want to keep the penny, according to a poll released today by Americans for Common Cents (ACC). Americansâ support for keeping the penny in circulation has remained strong and steady over the last seven years. A poll conducted by ACC in 2014 also found 68% of those surveyed favor the penny, representing a slight increase from 2012 where 67% of those polled said the coin should remain in circulation.

Continued strong support for the penny comes at a time when stores are experimenting with cashless payment. In response, some cities and states have passed laws to stop stores from refusing to accept cash and coins.Â Legislation in many US cities to allow customers to still use cash is rooted in historic barriers to credit and banking services for certain nonwhite consumers. Notably, 80% of African Americans and 70% of Hispanics support the continued circulation of the penny the ACC poll found.

According to the federal government, around 25% of the population are either unbanked or under-banked, typically those with low incomes who lack the minimum balance to open checking and savings accounts.

Particularly vulnerable parts of society, such as the elderly, immigrants, and homeless may not have a bank account and are more likely to still depend on physical money...

âA move to force customers to use plastic cards or mobile devices discriminates against those without credit or bank accounts,â said Americans for Common Cents Executive Director Mark Weller. âParticularly vulnerable parts of society, such as the elderly, immigrants, and homeless may not have a bank account and are more likely to still depend on physical money,â Weller added. The City of Philadelphia and the New Jersey legislature have passed measures this year that would ban cashless stores.

The poll was conducted by the Opinion Research Corporation and found strong penny support with those making less than $100,000 per year. Over 72% of Americans making under $50,000 want to keep the penny. The poll also found 74% of Americans making between $50,000 and $100,000 want to keep the coin. Amazon Go and other retailers who support cash-free stores havenât said how they could serve those without a bank account, thus highlighting the need â consistent with public opinion â to keep the penny in circulation.

Americans for Common Cents is a broad-based coalition of business and charitable organizations dedicated to keeping the penny. ACC was formed in 1990 in response to Congressional threats to eliminate the one-cent coin (www.pennies.org). Opinion Research Corporation International of Princeton, New Jersey, surveyed a national sample of 1,000 adults by phone. The margin of sampling error is +/- 3.1%.