Reaching Beyond the Obama Care Hype

How will Affordable Care impact consumers and investors? 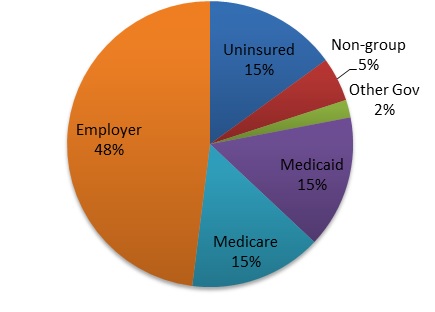 The Patient Protection and Affordable Care Act, commonly known as the Affordable Care Act (ACA) or “Obamacare,” has been at the center of the recent government shutdown and debt ceiling debates as well as a source of controversy in the media. In order to better understand the issues, this letter will delve past the hype and discuss how Obamacare may affect investors and the economy.

Obamacare is a set of health reforms that was passed by Congress and signed into law in March 2010. Considered the biggest extension of federal health care benefits since the establishment of Medicare and Medicaid in 1965, Obamacare will let some 47 million Americans who currently lack insurance to purchase various types of government-sponsored health coverage. The stated purpose of the bill is to increase the number of Americans covered by insurance and decrease the cost of health care in the U.S.

The centerpiece of the health reform bill are the insurance exchanges, where people who do not currently have health insurance will be able buy it. The insurance marketplaces opened for enrollment on October 1, 2013 and the ACA will begin delivering insurance coverage on January 1, 2014. Among other important changes, Obamacare also bars insurance companies from denying benefits based on pre-existing medical conditions like pregnancy, cancer, or disability. Insurers must also justify any insurance premium increase over 10 percent.

Why is Obamacare controversial?

The ACA has drawn a significant amount of opposition and most of the controversy is due to a fundamental disagreement about the idea of universal health insurance. Opponents to the law think that Obamacare will lead to the disruption of existing health plans, increase the costs of insurance, and result in higher costs to businesses and employers.

There is also opposition to specific aspects of the new regulations, such as the employer mandate, a penalty that will be incurred by businesses with more than 50 employees that do not offer health insurance to their full-time workers. Some economists worry that this provision will act as an incentive for employers to substitute part-time workers, thus having an adverse effect on the labor market. Although the employer mandate has been delayed until 2015, there is already evidence to suggest that some employers are cutting worker hours to avoid falling under ACA provisions.

What does Obamacare mean for investors and the economy?

According to estimates prepared by the Congressional Budget Office (CBO), Obamacare will reduce the federal deficit by $210 billion over the 2012-2021 period because revenue will significantly exceed expenses. A major source of revenue will be higher Medicare taxes, new annual fees on health insurance providers, pharmaceutical companies, and drug manufacturers, a new 40 percent excise tax on so-called “Cadillac” insurance policies, and reductions in Medicare reimbursements for hospitals that don’t meet standards of care. The CBO also believes that the ACA will also extend the solvency of Medicare by an additional 8 years.

On the other hand, economists lack a clear understanding of the effects provisions, like the employer mandate, will have on the labor market, or how Medicare reimbursement rates will affect the healthcare industry. It’s likely that these effects won’t be visible for years.

When attempting to understand how Obamacare may affect you as an investor, it’s important to keep your personal political views in check. Regardless of your opinions about the ACA, there are some objective conclusions that we can draw about how different sectors may be affected:

It’s impossible to know exactly how the ACA will affect markets, but we know that new regulatory environments often provide opportunities for flexible investors with a long-term outlook. In the short term, uncertainty around the ACA rollout and political debates may lead to increased volatility; however, we encourage our clients to focus on their long-term objectives and not to worry too much about short-term market movements.

We hope that you’ve found this letter interesting and informative. If you have any questions about the information we’ve presented or want to know how the ACA may affect your investments, please let us know; we would be happy to discuss your concerns. As always, it is our sincere pleasure to be of service.