Generation Z Opts to Stash Their Cash in Savings Rather Than Investâ¨; 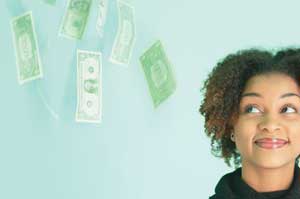 September 11, 2014–(BUSINESS WIRE)–Facing worries of unemployment, diminishing Social Security benefits and an average student loan debt of $29,000, those in Generation Z (ages 15-24) understand the importance of saving. TD Ameritradeâs 3rd Annual Generation Z survey takes a closer look at what this generation is doing right and where there is room for improvement. The survey also polled Generation Y (ages 25-37) this year, to see how these two generations differ.

When asked, in an open-ended question, their biggest concern with todayâs economy, members of Gen Z were most likely to say jobs/unemployment. This was their biggest worry in 2013 as well. However, it appears to have diminished, down to 25 percent from 34 percent, mirroring, perhaps, the improvement in employment rate for the class of 2014.

Kaci F., a Gen Z intern for TD Ameritrade, shares this sentiment, âItâs very difficult to find a job right now, but I think the economy has been getting better. I think we have a better chance now than a couple years ago finding employment.â

One shift that Kaci and others in her generation are experiencing is securing post-college internships rather than full-time jobs. âI think that will become the new norm,â says Kaci.

Brenna L., a fellow intern at TD Ameritrade agrees. âEmployment right now so heavily relies on experience,â she says, âand for our generation getting that experience and getting our foot in the door is the hardest, so people like us are interning in our 20s because we need that experience.â

Jobs may be todayâs worry, but members of Gen Z have some future concerns on their minds as well. An increased number of those in Gen Z â from 39 percent in 2013 to 44 percent this year â fear that Social Security and other similar government retirement programs will be depleted by the time they retire. And, as the average student loan debt has continued to climb, itâs no surprise that nearly half (44%) of those in Gen Z say they worry about having a large student loan balance when they graduate.

Gen Z vs. Gen Y: Is College Worth It?

Despite fears of accruing too much student loan debt, the majority of those in Gen Z (72%) have attended, are currently in or plan to attend college. Additionally, 53 percent say they plan to pursue an advanced degree. Thatâs likely because they increasingly believe that a college education is key to their success (60% feel itâs very important, up from 54% in 2013). The older members of Gen Y are less likely to see college as very important (47%). However, among those in Gen Y who went to college, 51 percent still feel their college education was worth every penny invested.

A few, like Demarcus J., a recent Gen Z graduate and former TD Ameritrade intern, feel that there is value in gaining an advanced degree. âThe bachelorâs today is like getting a high school degree,â he says. âYou have to have it in order to be competitive in the job market. I think that having a masterâs gives you a more competitive edge.â

Parents: Your kids are listening. Members of Gen Z (51%) report that their parents are the number one resource for learning about finances. According to the survey, 84 percent of those in Gen Z say their parents discussed the importance of saving, on average, by age 14.

However these financial lessons are being taught, it appears that good financial habits are being formed. A few highlights of Gen Zâs fiscal responsibility from the survey include:

âTalking to your child about money can be a difficult discussion,â said Nicole Sherrod, managing director at TD Ameritrade. âHowever, weâve seen from our previous research that children who had parents who spoke to them at an early age about fiscal responsibility are more likely to better understand the importance of saving and have good budgeting habits. Itâs never too early to start having discussions with your children about money.â

Talking to your child about money can be a difficult discussion

While members of Gen Z appear to be taking some good steps toward their financial futures, there are some areas in which they could use a little guidance.

For one, it appears credit card debt increases with age. The average debt for:

Life after College: Moving Back in with Mom & Dad?

So what does the future hold for Gen Z? Nearly half (49%) of those surveyed say they have moved out or plan to be out of the house by age 20, while only 40 percent of those in Gen Y say that they moved out by age 20.

Like last year, those in Gen Z say the age theyâd be embarrassed to still be living at home with their parents is 28. But, Gen Y wouldnât feel so until age 31, on average. And whatâs more, 17 percent of Gen Y survey respondents say they wouldnât be embarrassed until age 40 or even older.

Whenever they leave the nest, Gen Z wants to find a job that inspires them with the vast majority (74%) saying that feeling inspired by their work is more important or equal to the salary they earn. They are also looking for a job that allows them to make a positive contribution to society (59%). Thirty-six percent of those in Gen Z would prefer to be self-employed/entrepreneur, rather than traditionally employed.

Investing for the Future

âI donât think my generation really thinks about savings like we should,â says Caitlin N., an intern for TD Ameritrade. According to the survey, only one in five Generation Z respondents say they are currently saving for retirement.

“While itâs promising to see that Gen Z is starting off with a good understanding of the importance of investing and saving, there is a tremendous opportunity to help educate them on all of the available options,â says Sherrod. âTeaching those lessons before they leave the nest can have an impact on how they pursue their long-term financial goals. However, itâs just as important that young people have access to financial resources to help them put these lessons into practice when they leave home and enter the lecture halls.â

The survey found that only 10 percent of those in Gen Z report learning financial lessons from a teacher or course at school. Many Gen Z respondents (42%) report they have not taken a class about investing, largely because there were no classes available (40%).

âEducators need the tools and support to instill these financial lessons and that was one of the reasons why we created TD Ameritrade U,â adds Sherrod. âOur program offers professors an interactive curriculum that can help cultivate a passion for investing in their students. Through TD Ameritrade U, students can conduct research, place paper trades and manage positions, using our award-winning thinkorswim desktop and mobile trading platforms to bridge the gap between the classroom and real world.â

Regardless of age â teens, 20s or 30s â itâs never too early to start learning how to invest and save for the future.