Retirement Contributions on the Rise;
Average contributions increase 18%, up 88% since height of financial crisis 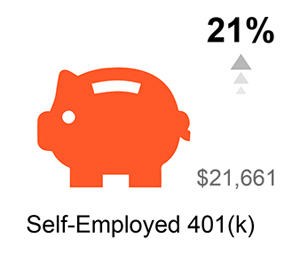 According to the analysis1 , which looks at more than 200,000 small business accounts offering a Simplified Employee Pension Plan (SEP-IRA), Self-Employed 401(k) or Savings Incentive Match Plan for Employees (SIMPLE-IRA), in the past year alone, the average balance in these plans increased 4 percentâand average contributions increased 18 percent. Better still, compared to 2008 levels, when balances were at their lowest, average savings have jumped an impressive 88 percent, a positive indication that suggests the small business segment is feeling confident enough about their present financial situation to contemplate saving for a future in retirement.

Since small business owner attitudes are often good predictors of economic growth, these retirement savings numbers are good news, and in line with other indicators. For example, according to the National Small Business Associationâs 2014 year-end economic report, nearly half (48 percent) of respondents feel the economy is better off now than it was five years ago, the highest level since the question was first asked in 2008. Fidelityâs analysis also suggests this increased optimism is shared by both employers and employees alike, with contributions to both Self-Employed 401(k)s (which are offered to business owners) and SIMPLE IRAs (offered to employees) steadily increasing for five consecutive years.

âThis is encouraging, because our research has consistently shown too many Americans are unprepared to live comfortably in retirement,â said Ken Hevert, vice president, Fidelity Investments. âWhile many small business owners count on the sale of their business as a big part of their retirement plan, if the recent past is any indication, itâs important to have options. Selecting a retirement savings plan that is easy to administer and low-cost is criticalâit can help maximize retirement savings, retain valuable employees and provide key tax deductions.â

Among the other key findings of the savings behaviors of small business accounts from the beginning of 2008 to the end of 2013:

To illustrate this, Fidelity has created an infographic that demonstrates average retirement contribution and balance gains for small businesses.

Fidelityâs online Small Business Retirement Center also has a wealth of educational information available, including an SEP Contribution Calculator to help figure out what percentage should be contributed to a SEP-IRA, Self-Employed 401(k) plan or Profit Sharing plan. In addition, Fidelity has retirement representatives with technical knowledge on retirement plans for small business owners and can provide one-on-one consultation at no charge to determine which plan to select and a contribution rate.

About Fidelity Investments
Fidelity Investments is one of the worldâs largest providers of financial services, with assets under administration of $4.7 trillion, including managed assets of $2.0 trillion, as of March 31, 2014. Founded in 1946, the firm is a leading provider of investment management, retirement planning, portfolio guidance, brokerage, benefits outsourcing and many other financial products and services to more than 20 million individuals and institutions, as well as through 5,000 financial intermediary firms. For more information about Fidelity Investments, visit www.fidelity.com.