What are consumer attitudes toward the health-insurance market on the whole? 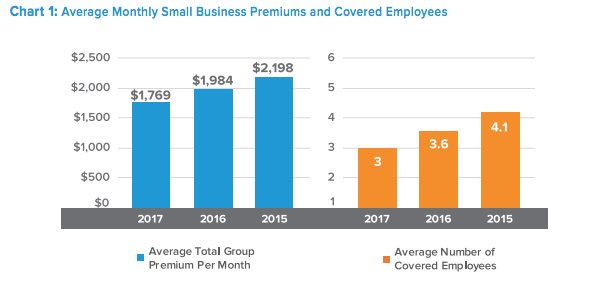 eHealthâs report, Small Business Health Insurance: Costs, Trends and Insights 2017, provides a snapshot of costs and plan selection trends in the small business health insurance market for the 2017 calendar year. It also explores consumersâ attitudes toward small business coverage and the market as a whole.

The findings are based on an analysis of applications received by eHealth from employer groups with fewer than 30 employees in 2017 and on the results of a March 2018 survey of small business owners that purchased their group health coverage at eHealth.

â¢ Nearly 80 percent of small business owners say they worry about the cost of coverage; more than 6 in 10 (62 percent) said that a 15 percent increase in premiums would make their current group health insurance coverage unaffordable, potentially leading them to shop for more affordable options or contribute less to employee premiums.

â¢ More than 6 in 10 small business owners say they offer health insurance coverage to help them hire and retain the best workers. However, 61 percent say the cost of small business coverage has limited their ability to award employees bonuses or offer raises.

In 2017, the nationwide average monthly premium for small business health insurance plans purchased at eHealth was $1,769. This reflects a decrease from the prior two years, as shown in Chart 1. However, there was also an increase in the number of very small businesses enrolling in group health insurance coverage between 2015 and 2017. The result is a smaller average group size in 2017 (3) as compared with 2015 (4). This shift may be explained, in part, by more owners of very small businesses turning to the group health insurance market for the first time because of concerns over the instability and cost of coverage in the individual and family market, which increased at twice the rate of small business policies.

â¢ Most small businesses worry about the cost of coverage: 78 percent of respondents were somewhat or very concerned about their ability to continue paying for their employeesâ health insurance.

â¢ A moderate increase in premiums would threaten access to coverage: 62 percent of respondents said a premium increase of 15 percent would make health insurance unaffordable, forcing them to drop coverage or shop for a new plan.

â¢ Increased premiums lead business owners to shop for new coverage: 47 percent of respondents said the need to find a lower-premium plan had caused them to shop for a new policy in the past. Onequarter (25 percent) said that when shopping for new coverage they wanted a health plan with lower deductibles, while 23 percent wanted a plan that offered a broader network of medical providers.

â¢ Most worry about employees being able to afford their share of costs: 76 percent were somewhat or very concerned about their employeesâ ability to pay premiums, deductibles and copayments. Nearly two-thirds (64 percent) said their employees earned an annual income of $50,000 or less.

The Impact of the ACA

Comparing Small Business and Individual Health Insurance Prior to the implementation of the Affordable Care Act (the ACA), employer-sponsored health insurance plans typically provided richer benefits, and cost more on average, than coverage in the individual insurance market.

The Impact of Health Reform on Small Businesses According to eHealthâs survey, a majority of small business owners do not feel heavily impacted by changing market dynamics and regulations associated with the Affordable Care Act:

â¢ Impact of the law was minimal: Only 21 percent of respondents said they faced increased pressure from employees to provide health insurance when major provisions of the ACA took effect in 2014; 79 percent felt no additional pressures from employees.

â¢ Repeal of the individual tax penalty wonât change coverage strategies: Starting in 2019, people will no longer face a tax penalty for going uninsured. Nearly all (95 percent) survey respondents said that the repeal of the tax penalty will not tempt them to stop offering coverage to their workers.

â¢ Confusion about open enrollment: Only 42 percent of small business owners say they are aware that companies can enroll in group coverage at any time during the calendar year.