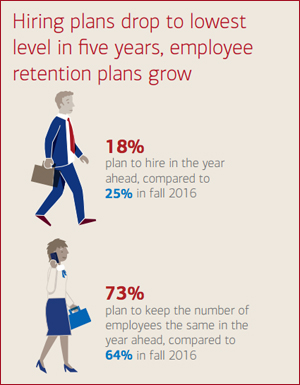 May 1, 2017 — CHARLOTTE, N.C.–(BUSINESS WIRE)–U.S. small business ownersâ confidence in the economy has increased significantly from just six months ago, according to the spring 2017 Bank of America Small Business Owner Report, which found that economic confidence ranks among the highest levels recorded in the last five years.

The report, based on a semi-annual survey of 1,000 small business owners across the country, reveals that a majority of entrepreneurs (52 percent) are confident the national economy will improve over the next 12 months â up a staggering 21 percentage points from just six months ago. Similarly, small business ownersâ confidence in their local economy improving jumped to 50 percent from 37 percent in fall 2016.

This increase in optimism, however, has yet to translate into positive movement on revenue expectations or five-year growth plans, which remain flat since the fall.

âWhat our survey shows is a significant shift in the mindset of small business owners from just six months ago,â said Sharon Miller, head of small business, Bank of America. âAlthough some uncertainty remains with respect to hiring and revenue, the increase in general optimism is certainly a promising indicator of potential growth for small businesses in 2017.â

The survey also found that concerns over most economic factors have decreased significantly from six months earlier, with the most significant declines from fall 2016 showing in:

Of small business owners surveyed who provide health insurance for employees, half felt cost increases have worsened in the last five years, compared to just 21 percent who believe this has improved, and 29 percent reporting no change. On the issues of health care quality and availability, small business owners were split, with the greatest number believing thereâs been no change (46 percent and 48 percent, respectively).

More than one-quarter of small businesses surveyed with fewer than 50 employees provide an employee health benefit, even though the law doesnât require it.

Millennial small business owners, in particular, noted that they are stressed about the business environment. Despite more ambitious revenue expectations as well as long-term growth and hiring plans, 42 percent of millennials report having had a nightmare about their business failing (vs. 28 percent of Gen-Xers and 23 percent of baby boomers).

Though many small business owners tend to work overtime â with more than three in five reporting they work more than 40 hours a week â 81 percent are satisfied with the number of hours they work. Nearly all value the flexibility of their work location and schedules, as well as the amount of time they can spend with family and close friends. While more than three-quarters admit work interferes with their home life, small business owners are more likely to report they have achieved a work-life balance (82 percent).

Although some uncertainty remains with respect to hiring and revenue, the increase in general optimism is certainly a promising indicator ...

For those who have not achieved balance, entrepreneurs report that key roadblocks include too many administrative tasks (46 percent), customers or clients requiring individual attention (44 percent), not having the financial resources to hire additional staff (38 percent) and not having enough employees to run the business without their support (34 percent).

When asked for their top predictions about small business 20 years from now, most entrepreneurs envision a virtual and automated future. Top predictions include:

Seventy-five percent of entrepreneurs surveyed say encouraging innovation in the workplace is a priority, and 77 percent say it is a key contributor to business success (compared to 95 percent and 99 percent of entrepreneurs in the tech industry, respectively). Thirty-seven percent say they are âindustry-leadingâ or âahead of the curve,â while 52 percent say they âkeep the same paceâ with other businesses in their sector. For those in the tech industry, 59 percent consider themselves âindustry-leadingâ or âahead of the curve,â and one-third are keeping pace.

Waves of the Small Business Owner Report before 2016 were conducted by telephone, and while best efforts were made to replicate processes, differences in sample, weighting and method suggests caution when making direct statistical comparisons to results from previous years.

Bank of America
Bank of America is one of the world’s leading financial institutions, serving individual consumers, small and middle-market businesses and large corporations with a full range of banking, investing, asset management and other financial and risk management products and services. The company provides unmatched convenience in the United States, serving approximately 47 million consumer and small business relationships with approximately 4,600 retail financial centers, approximately 15,900 ATMs, and award-winning digital banking with approximately 35 million active users and more than 22 million mobile users. Bank of America is a global leader in wealth management, corporate and investment banking and trading across a broad range of asset classes, serving corporations, governments, institutions and individuals around the world. Bank of America offers industry-leading support to approximately 3 million small business owners through a suite of innovative, easy-to-use online products and services. The company serves clients through operations in all 50 states, the District of Columbia, the U.S. Virgin Islands, Puerto Rico and more than 35 countries. Bank of America Corporation stock (NYSE:BAC) is listed on the New York Stock Exchange.