Significant Implications Of The Upcoming Election

Fitch Ratings-New York-12 October 2020: The forthcoming U.S. election will have significant implications for the policy landscape, says Fitch Ratings. Two of the potential outcomes are most relevant for credit. A “status quo” result involving President Trump winning re-election with a majority-GOP Senate would likely signal a continuation of deregulatory and populist measures. Conversely, a victory for Democratic challenger Joe Biden with Democrats controlling the Senate would likely mean more expansive fiscal measures to combat the effects of the pandemic and tightened regulations over key segments of the economy. Fitch assumes that Democrats retain control of the House in both outcomes.

Response to the ongoing economic and health effects of the pandemic will be an immediate focus for the new administration, although strategies will contrast in where and how to target aid. Meaningful differences between the two major parties’ policy orientations mean that the impact on ratings will vary by outcome, in some cases compounding existing challenges from the pandemic. Key policy areas where this split matters most include fiscal stimulus and entitlement reform, taxes, the regulatory environment, foreign policy and trade, healthcare and infrastructure. 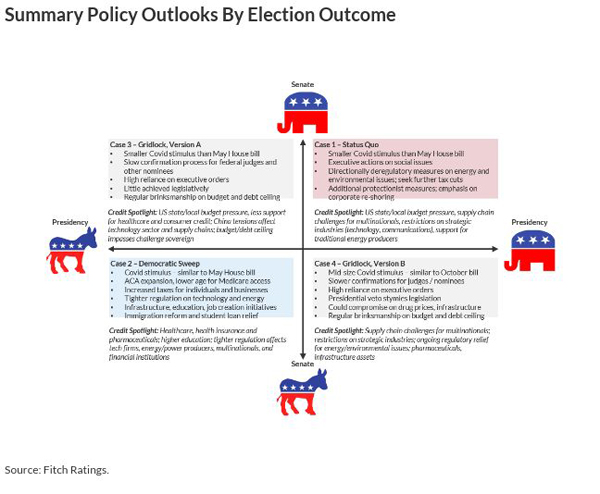