Unbeknownst to most retirement plan participants, annuities inside Defined Contribution (DC) plans, such as 401(k) plans, serve a purpose akin to that of Defined Benefit (DB) plans: They provide the peace of mind that comes with receiving a guaranteed income stream for life in retirement. Employers can add annuities to a 401(k) plan investment menu after vetting with an advisor(s), a source employees trust to be looking out for their best interests and for the needs of the overall plan demographics.

While many of todayâs retirees rely on the stable income they enjoy from historical DB pension offerings, unfortunately, the market and demographic circumstances of the past few decades have made meeting the income obligations of DB pensions more expensive for employers. Excepting any potential effect of COVID-19, the U.S. has seen consistent life expectancy increases since at least the end of World War II. During this same period in which life expectancies have been rising, interest rates have been in secular decline. Either of these factors aloneâthe expectation of making lifetime payments for longer or the lower discount rate applicable to long-term liabilitiesâincreases the cost associated with an employer offering a DB plan.

This combination of trends resulted in a negative impact to the corporate income statements of many employers offering DB plans. Instead of offering corporate sponsors a source of earnings with a positive contribution to the bottom line, as had been the case during the high interest rate environment of the 1980s, by the 1990s and 2000s, DB plan liabilities became a consistent corporate earnings depressor.

Not surprisingly, this effect caused CFOs to move away from DB plans and towards employer-sponsored DC plans as a primary retirement vehicle.This shift from DB to DC caused risk-shifting away from expert liability-driven investors advising the DB planâlifetime income retirement payments from which were âimplicitlyâ backed by the assets of the DB plan and/or corporate assetsâtowards under-prepared individual DC plan participants, making it one of the largest and yet most under-reported risk-transference events in Americaâs financial history.

The Emergence Of The 401(k) Market

401(k) plans came into existence as a result of the Revenue Act of 1978, and were intended to be an important supplement to the lifetime income benefit of DB plans, providing employees with a cost-effective outlet to save for discretionary expenses in retirement. They were not originally intended to serve as Americansâ primary source of retirement income, and appropriately became the final leg in the three-legged stool that included lifetime income from Social Security and DB pensions along with the supplemental savings from 401(k) plans.

In 2020, 63% of Americansâ qualified assets were in IRAs and DC plans, up from 48% of qualified retirement assets in 2000. It is no longer the case that the majority of American retirement assets are professionally managed for the explicit purpose of providing consistent, predictable lifetime income to last throughout retirement.

Now that DC plans have replaced DB plans as the primary source of American retirement wealth, and with income from DB pensions no longer universally available to most American workers, it has become essential that 401(k) plans offer sources of guaranteed lifetime income, such as annuities, to not only supplement lifetime income from Social Security (if available to the individual), but also, importantly, to replace lifetime pension income that, in decades past, would have been provided through DB plans. It appears that most regulators in Washington, D.C., agree with this viewpoint given the strong bipartisan support enjoyed by the SECURE Act passed in late 2019, which created a more conducive environment to including institutionally priced in-plan annuities inside DC plans. 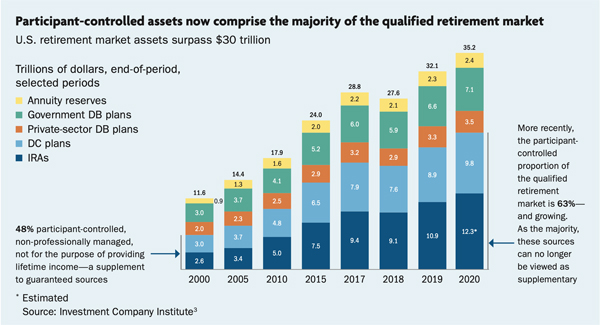 Enter The SECURE Act: Because âThe Times, They Are A-Changingâ

In 2019, Congress passed the bipartisan Setting Every Community Up for Retirement Enhancement Act of 2019 (SECURE Act), which includes several provisions intended to increase access to protected lifetime income as part of a broader package of retirement security measures passed.

With these protections now in place, it is time to begin clarifying some common misconceptions about annuities, the only product that can be added to DC plans to restore Americansâ retirement confidence and provide income that can never be outlived.