Roses are red, violets are blue, donât let that financial talk sneak up on you!

Survey: When it comes to discussing money and relationships, the sooner, the better 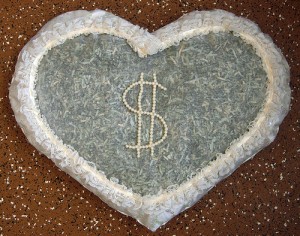 WILMINGTON, Del.–(BUSINESS WIRE)–A new survey released today byÂ Chase Card Services, a division of JPMorgan Chase & Co., found that when it comes to talking finances with your significant other, most Americans believe the sooner, the better. TheÂ Chase Blueprint Valentineâs Day SurveyÂ found that nearly one-third (30 percent) of consumers think finances should be discussed from day one â with men more likely than women to think day one is the best time (37 percent to 24 percent).

Overall, two-thirds (65 percent) of consumers think it is best to discuss finances with your significant other within the first three months of the relationship. So, why not make Valentineâs Day the day for the money talk? Valentineâs Day is the day people focus on romance and make commitments to one another, making it the perfect time to focus on one of the most important elements of a happy relationship: financial compatibility.

âFinances are one of the biggest reasons relationships fail,â says Dr. Michelle Callahan, psychologist and relationship expert who partnered with Chase BlueprintÂ® on the survey. âBeing able to speak openly and honestly about finances will only make a relationship stronger and what better day to take that next step than on Valentineâs Day?â

Coming out of the Great Recession, financial security is a more desirable trait in a partner. For those concerned that financial standing may be a deal breaker in their relationship, theChase Blueprint Valentineâs Day SurveyÂ brings good news for most people in a relationship: itâs not.

Respondents were asked what they would do if they found out on Valentineâs Day that their partner had a significant amount of debt â $10,000 or more. Nearly three quarters (74 percent) of Americans would sit down and talk with their significant other about it, rather than helping them pay down debt or breaking up with them.

âConversations about debt and finances can be difficult, but they arenât impossible when you come to the table prepared with the right tools,â says Rachana Bhatt, director, Chase Card Services. âWhen itâs time to talk, bring a list of your accounts, your debts, total income and your financial goals. Consider tools, like Chase Blueprint, that can save you money and help you pay down credit card balances faster.â

Regardless of when couples decide to discuss their finances, having the money talk with a significant other is a necessary path towards achieving financial compatibility

When it comes to a successful relationship, 94 percent of Americans think it is important to have compatible spending habits with their partner. However, 62 percent think they canât achieve financial compatibility or that it will be very hard to change the spending and borrowing habits of their significant other.

Dr. Michelle added,Â âRegardless of when couples decide to discuss their finances, having the money talk with a significant other is a necessary path towards achieving financial compatibility.â Not surprisingly, the survey found that experience brings wisdom. Those in a relationship are two times more likely to think that the best time to discuss finances with a significant other is on day one, compared to those not in a relationship (39 percent versus 18 percent).

Is money why youâre single?

The Chase Blueprint Valentineâs Day Survey was conducted on behalf of Chase Card Services via an online omnibus survey conducted by Research Now, an independent research company.Â Interviews were conducted from January 2 – 8, 2013 among a nationally representative sample of 1,212 respondents age 18 and older. The margin of error for all respondents is +/- 2.8% at the 95% confidence level.Â The margin of error for those respondents in a relationship is +/- 3.7% at the 95% confidence level.

About Chase Blueprint
Chase BlueprintÂ is a unique set of features available on select Chase credit cards that help cardholders manage their spending and borrowing. Blueprint is available free of charge to new and existing Chase cardholders. Itâs simple to set up, easy to use and customizable. With Blueprint, cardholders can save money and pay down balances faster.

About Chase
Chase is the U.S. consumer and commercial banking business of JPMorgan Chase & Co. (NYSE: JPM), a leading global financial services firm with assets of $2.4 trillion and operations in more than 60 countries. Chase serves more than 50 million consumers and small businesses through more than 5,500 bank branches, 17,500 ATMs, credit cards, mortgage offices, and online and mobile banking as well as through relationships with auto dealerships. More information about Chase is available atÂ www.chase.com.