Rising Taxes are Upon Us!

How can your clientsâ assets work smarter in the new tax environment? 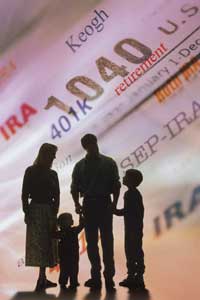 With April 15 fast approaching, investors are learning a painful lesson: a bull market and the newest tax laws make for bigger payments to the IRS this year â in some cases, much larger payments than investors anticipated. Advisors likely know all too well that some of the discomfort will be due to the new Medicare taxes, but these are not the only cause of clientsâ growing distress. Other changes in the tax laws and more taxes on income from taxable investments also are contributing factors.

While the lesson is still fresh in investorsâ minds, advisors have an opportunity to demonstrate value by showing clients how they may be able to curb future taxes and keep their money for other, better uses. New-generation variable annuities (VAs) can play an important role in generating such tax savings, before and after retirement.

The new taxes are fast taking their toll

Adding to the tax burden is the American Taxpayers Relief Act of 2012 (otherwise known as the Fiscal Cliff deal), which included more than 200 new tax provisions. Investors in the 33 percent tax bracket and above are now seeing higher overall income tax bills due to three of these provisions.

If a taxpayerâs 2013 modified adjusted gross income (MAGI) was above $250,000 for single filers ($300,000 for joint filers), his or her itemized deductions were reduced and personal exemptions phased out as income rises. For single filers with taxable income above $400,000 in 2013 ($450,000 for joint filers), the marginal and long-term capital gain tax rates jumped from 35 percent and 15 percent in 2012 to the 39.6 percent and 20 percent, respectively (the MAGI threshold amounts for each of these items will be indexed for inflation annually, beginning in 2014).

Finally, the new Affordable Care Act surtaxes were first assessed in 2013. Once MAGI exceeds $200,000 for single filers ($250,000 for joint filers), capital gains, dividends, interest, and similar income (i.e., unearned income) maybe subject to a 3.8 percent Net Investment Income Tax (NIIT), which is in addition to any ordinary income or capital gain taxes that apply. And when salary or other compensation (i.e., earned income) exceeds the same threshold, the client faces a 0.9 percent Additional Medicare Tax on the earned income above the threshold, which is subtracted from the clientâs paycheck or due when taxes are paid.

For example, dual-income joint filers with two dependents and 2013 compensation of $260,000 would have had $10,000 of earned income subject to the 0.9 percent tax ($260,000 – $250,000 = $10,000). They would have owed $90 in Additional Medicare Tax on their earned income for 2013. Assume they also received approximately $50,000 in taxable investment income from $500,000 of invested assets, giving them an MAGI that exceeded $300,000. At this level of MAGI, their itemized deductions would have been limited and their personal exemptions reduced. Due to the Medicare tax on unearned income when joint filersâ MAGI exceeds $250,000, taxes attributable to their taxable investment income in 2013 could have been as much as $1,900 greater than in 2012, depending upon the type(s) of investment income they received. The overall increase in their tax burden could have been even more.

Since the thresholds for the Medicare surtaxes are not adjusted for inflation in years after 2013, the NIIT and Additional Medicare Tax will take a bigger bite as incomes increase, even if those increases only keep pace with the cost of living. Added to the potential for larger taxable mutual fund distributions, these changes mean bigger tax burdens on investors, a fact that many investors may be discovering as they prepare their 2013 tax filings. The changing scenario will make it more challenging for clients to prevent tax erosion of both earned and unearned income, and each additional dollar paid in taxes may reduce the amount available to meet current expenses or save for future goals.

If the financial crisis had a silver lining, capital loss carryovers on taxable equity investments were it. Domestic-stock investments generated substantial capital losses between 2008 and 2010, and those losses could be carried forward to offset capital gains earned in the bull market that followed

The near certainty of bigger tax bills on non-qualified investments for middle- and upper-income clients makes this a good time to introduce them to various forms of tax-wise investing, including the newest generation of VAs. The tax-deferred treatment of VAs will have a more substantial and positive impact on what investors keep, after taxes, than it did during the 2000s.

In contrast to traditional VAs, the newest VA offerings omit costly riders in favor of keeping fees and expenses in check while maintaining investment flexibility. The cost ratio of these feature-light VAs is 1.36 percent**, on average, slightly more than the 1.19 percent*** average cost ratio for all mutual funds tracked by Morningstar, Inc. Despite this, investing in a new-generation VA may produce better after-tax results for clients.

Consider again the hypothetical case of a dual-income couple with $310,000 of earned and investment income in 2013. Transferring half of their taxable invested assets to a new-generation VA in 2013 would have allowed them to save for retirement while reducing their current-year tax obligation.

The transfer of 50 percent of the taxable assets, or $250,000, at the beginning of the year to the tax-deferred VA would have reined in their 2013 taxable investment income by half, to approximately $25,000. Added to earned income of $260,000, this amounts to an MAGI for 2013 of $285,000, below the $300,000 threshold in 2013 at which reductions of itemized deductions and personal exemptions began. As a result, the couple could have made full use of their itemized deductions and personal exemptions.

Another tax benefit: Total taxes attributable to taxable investment income, including the 3.8 percent Medicare surtax, would have been reduced substantially, helping to pare down their total tax burden for the year. In our hypothetical analysis, the coupleâs total tax attributable to taxable investments could have been curbed by as much as $4,600 (as compared to their 2013 tax without use of the VA), and their 2014 tax obligation trimmed by as much as $5,000. Importantly, the potential for annual tax savings is not a single-year phenomenon; every year that the couple keeps the assets in the VA, they can expect to report less taxable investment income to the IRS than they would claim if the assets were held in a comparably invested, taxable portfolio.

Meanwhile, the assets transferred to a new-generation VA can grow tax-deferred until withdrawn, creating the potential for more after-tax income in retirement (i.e., after age 59 and a half), depending on individual circumstances. The larger after-tax income during retirement may help clients maintain their lifestyle in retirement or defray higher health care expenses, a major concern of retirees in all tax brackets. Finally, the VA can be a valuable component of a clientâs legacy plan.

As with any tax-related matter, a conversation between client and tax advisor is the best way to help clients understand how the newest tax laws affect them. Follow up that conversation with one of your own introducing the tax benefits of a lower-cost VA. Show clients how a new-generation VA can give them investment options at a more moderate cost than traditional VAs; potentially provide more after-tax retirement income than a comparable non-tax-deferred investment; and help reduce current tax bills on both earned and unearned income. Income from nonqualified investments that is protected from greater tax erosion today can be used to fulfill important life and financial goals tomorrow.