Rise of the âGaming Gamblerâ â Next Generation of Gamblers Influenced by Arcade, Video and Mobile Games 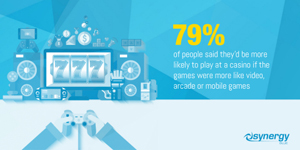 A new study from Synergy BlueÂ  September 12, 2019 — LAS VEGAS–(BUSINESS WIRE)–Synergy Blue, the premier creator of skill-influenced games and platforms for an emerging class of players, today released a new report showing the rise of the âgaming gamblerâ, an emerging generation of gamblers who are influenced by arcade, video and mobile games and looking for a more engaging gambling experience as a result.

In fact, 63 percent of people said if casino games were more like video, arcade or mobile games, theyâd spend more time playing them.

This and other findings were released today in a new report, The Rise of the Gaming Gambler. Synergy Blue surveyed over 1,000 gamblers to examine their preferences and expectations for their gambling experience, and found a growing trend toward the use of thought, skill and intuitive playing as key drivers of game engagement. Additionally, these game components also increased player perception of a stronger chance of winning, which was associated with more frequent game play and longer playing times.

The survey found that 84 percent of gamblers feel that games requiring more thought, strategy or skill to play increase their chances of winning. These preferences are also being driven by gamblersâ other gaming experiences, with 79 percent of gamblers saying if casino games were more like video, arcade or mobile games, they would be more likely to visit casinos to play.

âAs always, perception is everything, and weâre finding that this is increasingly true in gambling,â said Georg Washington, CEO of Synergy Blue. âIn a chance-based world, players want gaming qualities that make them feel like they have some control. The ability to think, make choices, and get better at a game over time not only offers more engaging play and longer playing times, but it increases the very powerful perception that the odds are shifting in their favor, which further increases engagement and play. Bringing the gaming experience into gambling is the key to emerging generations of gamblers, the Gaming Gambler.â

A previous report published by Synergy Blue in late 2018 found 19 percent of casino operators thought skill-influenced games could help drive longer playing times. In that same report, casino operators also listed player understanding as a key area of improvement for skill-influenced games. This new data hints that the modern gambler may not require as much instruction as we previously thought, with 77 percent saying that if a casino game resembled an arcade game, theyâd understand how to play.

In a chance-based world, players want gaming qualities that make them feel like they have some control....

The survey also found that table games were perceived by gamblers as the most exciting games to play due to the ability to make choices, improve playing over time, and the improved chance of winning. Additionally, they wanted to see these qualities replicated in slot games.

Additional findings from the report include:

Gamblers said table games are exciting to play because:

Synergy Blue creates âFun You Can Bet On!â As the leading provider of entertainment gaming solutions, the team is currently bringing arcade style, skill-influenced games, platforms, and applications to the casino market. The companyâs robust HAWG (Hybrid, Arcade, Wager-based Gaming) platform blends regulatory approved chance and skill-influenced gambling with the uninterrupted entertainment of arcade-style game play. Designed for an emerging class of players, Synergy Blueâs technology provides casino operators with a new generation of entertainment and games that are certified and backed by industry-leading patents. Now based in Las Vegas, Nevada, the company was founded in 2013 and has products and applications placed in six countries.