Advisors should understand the rules governing, and their impact on, beneficiaries 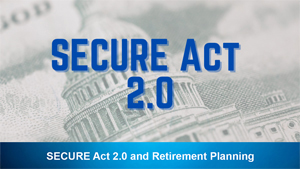 The SECURE Act, passed December 20, 2019, made several significant changes affecting retirement plans. Possibly the biggest change was to the rules that beneficiaries must follow after inheriting a retirement plan from a deceased plan owner.

For example, take the case of Harry, who died in 2018 at age 85 and left his IRA to his grandson, Paul, who was age 19. IRS rules, prior to SECURE, would require Paul to go to the IRS table for Single Life Expectancy and look at the life expectancy for someone age 20 (applicable age is defined as age as of December 31 of the year following date of death). The tables would show the life expectancy to be 63. To determine the required distribution in the first year, Paul would divide the balance in his grandfatherâs IRA as of December of the year prior to the first year and divide that by 63 (1.6%). Then each subsequent year, Paul would take the prior year balance on December 31 and subtract one from the prior yearâs life expectancy. So, in year 2, the life expectancy would be 62, year 3 would be 61 and so on.

As the percentages required to be taken for someone inheriting a retirement plan at age 19 are small, the likelihood is the IRA account would continue to grow. Continuing with the example above, if the value of the IRA Paul inherited from his grandfather as of December 31 in the year he died was $500,000 and the account grows at 6% per year, the total distributions Paul could have taken by the time the account needs to be fully liquidated is $5,648,000:

With the passing of the SECURE Act, this calculation changed for certain beneficiaries of retirement plan owners having died after December 31, 2019.

The SECURE Act creates a new category of beneficiary, referred to as an Eligible Designated Beneficiary (EBD). Anyone classified as an EBD would still be required to follow the old rules, taking only a minimum amount each year.

There are five classes of individuals who qualify as an EBD:

Spouses and beneficiaries not 10 years younger than the deceased retirement plan owner can continue to use the same IRS life expectancy table that would have been used if the SECURE Act had not been passed.

Minor children of the account owner can also continue to use the prior IRS Life expectancy table but only until they reach the age of majority, after which they need to use the new rule.

Beneficiaries who meet the IRS statutory definition of disabled or chronically ill also can continue to use the old rules.

So, what are the new rules for beneficiaries who do not qualify as EBDs?

Using the same example as above, if Harry were to die in 2021 leaving his $500,000 retirement plan to his grandson, Paul would not be required to take any money from the retirement plan annually but would have to withdraw the entire account by December 31, 2031.

You may think that waiting until the last year to withdraw the entire account would be a smart move. After all, by doing so, you would defer paying income taxes on distributions since none was taken. However, you would have to pay income taxes in the last year and, depending upon the amount of the distribution, it could be at a very high tax rate.

The new rules do not preclude you from taking distributions each year. The rule only requires the account to be fully distributed by the end of the tenth year following the year of death.

The new rules do complicate matters for those beneficiaries looking to try to minimize the taxes on the amount distributed and thus maximize the amount of funds withdrawn net of tax.

Under the old rules, it was much easier: take the minimum and let the balance grow tax deferred. And, while eventually the entire account would need to be distributed, for younger beneficiaries this could be many years in the future.

Under the new rules less flexibility remains, with higher stakes given that tax rates are likely to rise in the near future.

Beneficiaries Do Have Flexibility

There are several ways beneficiaries, however, can maintain some degree of flexibility once the 10-year clock starts ticking.

The first would be to continue to take the amount that would be required to have been taken if the owner had died prior to 2020. This would look just like the old rules up until the end of the tenth year when the entire account would be liquidated. This hybrid method would minimize the tax hit in the first nine years, allowing for more tax-deferred growth. Then in the tenth year, the entire account would be withdrawn, and tax would be paid at the marginal tax rate in effect during that year.

Another strategy would be to take an equal amount out each year. Taking out one tenth of the original account value each of the first nine years would spread the additional taxable income evenly until the last year, at which time whatever is left in the account would need to be withdrawn.

A third way would be to take nothing from the account for the first nine years and withdraw the entire account balance in the final year. This would maximize the tax deferral in the account until the last possible moment. You do run the risk, however, that you will pay much higher taxes than if you had paid taxes annually.

Finally, you could try to anticipate what tax brackets you may be in over the 10 years and take distributions based on those projected brackets. There is no guarantee that by doing this you will minimize the tax bite as tax laws could change, or your other taxable income could change.

This strategy also is the most difficult because it requires you to have a strong knowledge of tax law, or hire an advisor who does. You or your advisor would also need to be able to project tax rates over the next 10 years, not an easy feat for anyone.

It is hard to say which strategy is the best as it will vary for everyone based on their individual situation. The strategy that may wind up being used the most is the one where no distributions are taken until the final year. The reason, Iâm afraid, is not a good one. It likely will be simply because most beneficiaries will not be aware of the new rule and thus will do nothing each year until finding out in the tenth year that the entire account must be withdrawn.

Understanding the new rules created by the SECURE Act can at least give you a good place to start to figure out what is best for you.