How has the pandemic influenced retirement plans, timing and savings goals?

A recent RBC survey reflects changing attitudes of Canadians regarding their retirement horizons, in the wake of the pandemic. Visit here for more details. 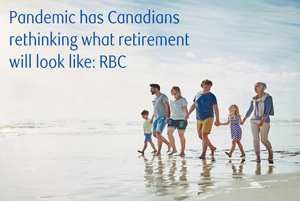 TORONTO, Aug. 27, 2021 /CNW/ – The pandemic has Canadians rethinking what their retirement could look like, when they will be able to retire, and how much they will now need to save to do so, according to not-yet-retired Canadians aged 50+ surveyed by the 2021 RBC Retirement Myths & Realities Poll.

The most immediate impact is that the pandemic has caused some Canadians to hit the pause button on their retirement date. Eighteen per cent of respondents say they’ll now be retiring later than expected, with that response highest in Alberta (33%).

Concerns around outliving retirement savings have reached their highest level in a decade, as 21% of respondents with more than $100,000 in investable assets now expect to outlast their savings by 10 years (compared to 16% in 2010), with the highest percentage reported in Quebec (27%).

Compounding what respondents are facing over the near-term is the fact that half (50%) do not yet have a financial plan, and only 20% have created a formal plan with an advisor or financial planner.

“If you are nearing retirement without a formal plan, there’s a shrinking window of opportunity to review your options, to see if you can enjoy the retirement lifestyle you’re hoping for,” explains Rick Lowes, Vice-President Strategy, RBC. “An advisor can help you translate your personal goals into financial ones and explore strategies to achieve them. Also, RBC’s MyAdvisor gives our clients the ability to use interactive scenario planning, to see the potential impact of today’s financial decisions on tomorrow’s projected outcomes.”

Poll respondents also indicated the pandemic has prompted them to either think about, or take action on, a number of retirement-related issues, including:

Canadians approaching retirement have also been resetting their retirement savings goals. Those with more than $100,000 in investable assets now estimate they will need to save $1 million on average â approximately $50,000 more than in 2019 â with over three-quarters falling short of their goal by almost $300,000 on average. Meanwhile, those with less than $100,000 in investable assets have lowered their retirement savings goal â now sitting at $533,153 (vs. $574,354 in 2019) â but they have a much larger savings gap of $472,991.

To help bridge a shortfall during retirement, both of these groups responded that they would:

“We know from past polls that retirees will find a way to make their finances work, but this may mean they aren’t leading the lives they were hoping for when they retire,” notes Lowes. “We’re here to help Canadians so they can focus on what truly matters to them.”

Being able to find and follow a passion as a retiree is the focus of RBC’s new Second Act video series, which highlights what can be accomplished beyond a first career, particularly if a retiree has a plan. For those who may feel their retirement dreams are out of reach, the series has a key piece of advice: Don’t give up on what you really want to do in retirement.

More information about the comprehensive resources RBC provides to support Canadians as they transition into and live in retirement is available in Retirement Planning.

About the RBC 2021 Retirement Myths & Realities Pollâ¨These are the findings of the most recent biennial RBC Retirement Myths & Realities Poll, conducted by Ipsos between May 21 and June 1, 2021. For the overall survey, a sample of 2,200 Canadians aged 50+ was interviewed via the Ipsos I-Say panel and non-panel sources, of whom 1,100 are pre-retirement. Quotas and weighting were applied to ensure that the sample’s composition reflects that of the adult population according to Census data and to provide results intended to approximate the sample universe. For this release, the data referenced is among a sample of 1,100 aged 50+ who are pre-retirees. The credibility of Ipsos online polls is measured using a credibility interval. In this case the results are considered accurate to within Â±2.6 percentage points, 19 times out of 20, for the full sample of retired and pre-retired Canadians aged 50+, and Â±3.4 percentage points, 19 times out of 20, for the sample of pre-retired Canadians aged 50+

About RBCâ¨Royal Bank of Canada is a global financial institution with a purpose-driven, principles-led approach to delivering leading performance. Our success comes from the 88,000+ employees who leverage their imaginations and insights to bring our vision, values and strategy to life so we can help our clients thrive and communities prosper. As Canada’s biggest bank, and one of the largest in the world based on market capitalization, we have a diversified business model with a focus on innovation and providing exceptional experiences to our 17 million clients in Canada, the U.S. and 27 other countries. Learn more at rbc.com.â