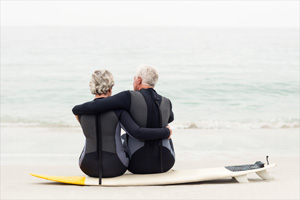 This is the 28th annual RCS by the nonpartisan Employee Benefit Research Institute (EBRI) and research firm Greenwald & Associates. It is the longest-running survey of its kind in the nation, exploring the retirement outlook of both workers and retirees.

âRetirees continue to be more confident in their retirement security than workers,â noted Craig Copeland, EBRI senior research associate and co-author of the report. âJust 17 percent of American workers say they are very confident in their ability to live comfortably throughout retirement, compared with nearly a third of retirees who say that are very confident. However, nearly two in three workers (64 percent) say they feel very or somewhat confident in their ability to retire comfortably.â Copeland points out that the percentage of workers who say they are at least somewhat confident is up from 60 percent in 2017.

âHealth care expenses in retirement appear to be playing a notable role in retireesâ confidence. Retirees are less confident in being able to afford medical expenses and the share very confident in affording long-term care also declined,â said Lisa Greenwald, executive vice president of Greenwald & Associates, and co-author of the report. âHalf of retirees say they didnât even try to calculate health expenses before retirement, and more than four in ten retirees say their health care expenses are higher than they expected. However, those that did the calculation are less likely to report health is costing them more than expected,â she said.

Workers may be looking for different ways to fill the retirement income gap.

âSatisfaction with DC plans is very important because that will encourage their use in building up assets for retirement. However, the data suggest many plan participants donât know what to do with their DC plan assets at retirement. Three in ten (31 percent) say they donât know whether they will roll the money into an IRA, keep it in the plan, or cash it out,â Copeland said. âAt the same time, participants are interested in guaranteed lifetime income options either inside or outside of their plan, which could be due to the lower expected reliance of workers on other guaranteed income sources like Social Security and traditional pension plans.â

Four in five current DC participants express interest in putting some or all of their money in guaranteed lifetime income products, regardless of whether the product is an in-plan investment option or a separate product purchased outside of the plan at the time of retirement. Furthermore, 21 percent of current DC participants say they will use their money in their plan to purchase a product that provides guaranteed monthly income for life, a notably larger share than the 7 percent of retirees who report that they have purchased such a product with DC assets.

Excerpts from the 2018 Retirement Confidence Survey

confidence that Social Security and Medicare will continue toÂ provide benefits equal to what retirees receive today hasÂ decreased. At the same time, more than 4 in 10 retireesÂ report that their health care expenses in retirement are higher thanÂ they expected

Why are workers confident?
Workers appear to be very positive about their workplace definedÂ contribution (DC) retirement plans and that may be impactingÂ overall retirement confidence. Those with a DC plan are far moreÂ likely to be confident in their ability to live comfortably in retirement.Â More than 4 in 5 with a DC plan report being very or somewhatÂ satisfied with the plan overall, and with the investment optionsÂ available to them. Eight in ten workers expect that theseÂ plans will be a major or minor source of income for them inÂ retirement.

Still, some workers may be guilty of false confidence and RCS dataÂ suggests they may be making some faultyÂ  assumptions:

Why are retirees less confident?
Retireesâ overall confidence shows signs of decline, but theirÂ confidence in being able to afford medical and long-term care
expenses in retirement is down significantly. On a related note, theirÂ confidence that Social Security and Medicare will continue toÂ provide benefits equal to what retirees receive today hasÂ decreased. At the same time, more than 4 in 10 retireesÂ report that their health care expenses in retirement are higher thanÂ they expected, and another 1 in 4 say long-term care costs haveÂ been higher.

There are still other factors that may be dampening retiree optimismÂ that are not measured in this survey, such as low interest rates. As inÂ the past, 2 out of 3 retirees in this survey report that they aim toÂ maintain or continue to grow their asset level in retirement.

That said, these retirees report the value of their assets is largelyÂ where they would expect them.

Confident workers and retirees are healthy workers and retirees
Â This yearâs RCS data emphasizes the impact health and health careÂ expenses have on retirement confidence and financial well-being.Â Six in ten workers who are confident in retirement overall are inÂ excellent or good health; among those not confident aboutÂ retirement, only 28% report such good health. The same is true forÂ retirees: 46% of confident retirees are in good health compared toÂ just 14% who are not confident. Retirees in fair or poor health areÂ more likely to have difficulty managing their money in retirement,Â including maintaining their pre-retirement lifestyle, managing day-todayÂ finances, and of course, managing health care costs.

Planning for healthcare in retirement may pay off
Only 19% of workers and 39% of retirees have tried to calculate howÂ much money they would need to cover healthcare costs inÂ retirement. Retirees who made this calculation are lessÂ likely to have experienced higher-than-expected health costs andÂ are more likely to say costs are as expected. Given theÂ current lack of planning, itâs not surprising that 7 in 10 employedÂ workers and 6 in 10 employed retirees say that workplace educationÂ on health care planning for retirement would be helpful.