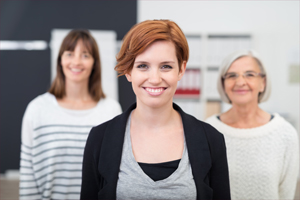 NEW YORK, March 13, 2017 /PRNewswire/ – Gender diversity at the top of corporations is coming incrementally but a tipping point is within sight, according to the 12th annual report from global talent acquisition firm Rosenzweig & Company.

Each year, the Rosenzweig Report on Women at the Top Levels of Corporate Canada tracks how many women hold the highest executive positions at Canada’s 100 biggest publicly-traded companies. These leaders of industry â CEOs, CFOs and others â are critical when it comes to changing corporate culture and enhancing diversity.

“There’s still much room for improvement but this is a positive signal when it comes to gender equality in business and society in general,” says Jay Rosenzweig, Managing Partner of Rosenzweig & Company.

“Businesses are beginning to wake up to the fact that investing in women gives them a competitive edge,” says Fran Hauser, angel investor and U.S. media executive. “Cultivating female leadership isn’t a feel-good corporate program; it’s a business opportunity. As an investor, my focus on female-founded startups has certainly paid off. Research proves this as well: tech companies led by women achieve a 35 percent higher ROI on average than those led by men. The Rosenzweig Report is required reading for companies that are ready to get serious about this opportunity.”

The National Basketball Association is a pioneer in promoting diversity through many ground-breaking campaigns involving superstar players, including a partnership with LeanIn.org. Such work is part of its corporate culture.

Women's engagement in decision-making is essential to the success of Canadian businesses, and at the core of our values of diversity and inclusion.

“Employing a diverse workforce is unquestionably the right thing to do, but it’s much more than that,” says Kathy Behrens, NBA President, Social Responsibility & Player Programs. “For us at the NBA, we know that a diverse and inclusive culture produces better business results. When it comes to the basketball court what matters is how good your game is, and we see increasingly the business world is embracing this meritocratic ethos as critical to success.”

“It’s time to really double down on our efforts to support the advancement of women entrepreneurs, women in leadership roles and women decision makers,” says Dawn Farrell, President and CEO of TransAlta Corp., and a member of The Canada-U.S. Council for Advancement of Women Entrepreneurs and Business Leaders, established concurrent to the recent meeting between Canadian Prime Minister, Justin Trudeau, and U.S. President, Donald Trump. “I’m excited by the prospects of working with female CEOs both here in Canada and the United States on what we can collectively do to make a difference and move the bar. Jay’s report will keep us honest.”

Adds architect and interior designer, Dee Dee Taylor Eustace: “For women to advance, we need to value what is important in life which is family then work. Create an environment that celebrates excellence in people, then success in your profession flourishes. Through Jay Rosenzweig and his team continuing to do the important work of measuring and analyzing the progress of women in the workplace, we will have a reminder to constantly change our approach to maximizing the output from women so that we not only compete but elegantly conquer.”

The annual Rosenzweig Report tracks the largest publicly-traded companies in Canada based on annual revenue ranging from $47 billion down to $2.4 billion. Each of these companies is required to file with regulators management circulars with names and compensation of the top five or more executives.

With a 12-year track record, many leaders are acknowledging its role as a catalyst for change.

“Each year the Rosenzweig Report serves as an invaluable reminder that the advancement of women is proceeding incrementally at best in many C-suites and boardrooms across the nation,” says Kathleen Taylor, Chair of the Board, Royal Bank of Canada, former President and CEO of Four Seasons Hotels and Resorts and a founding member of the 30% Club. “By aggregating and quantifying results, the Report highlights the fact that only modest gains are being made, hopefully providing a fact-based impetus for corporate Canada to move beyond more talk and get straight to more action.”

Adds Chrystia Freeland, Canada’s Minister of Foreign Affairs: “Women’s engagement in decision-making is essential to the success of Canadian businesses, and at the core of our values of diversity and inclusion. While Canada can be proud of its history, we have more work to do.”

Here are some key learnings in this year’s Rosenzweig Report:

Rosenzweig & Company is a high-end global talent management firm that focuses on designing, building and acquiring world class teams for its diverse client base.