Ready For Work, But Unprepared For Retirement

Planning and Progress 2014 Study: Personal finances and personal health are the top two priorities for Americans in 2014 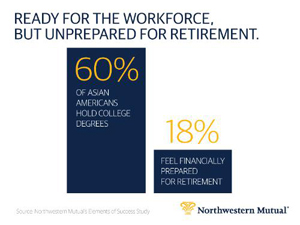 Northwestern MutualÂ again explored the state of financial planning in America today to obtainÂ insights into peoplesÂ  attitudes and behaviors toward money, goal-setting and priorities. The 2014 study surveyed nearly 2,100 American adults 18 or older.

âPersonal financesâ and âpersonal healthâ are the top two priorities for Americans in 2014, ahead of things like âspending time with family and friendsâ and âcareer.â But prioritizing appears to stop short of taking action when it comes to personal finance.Â  While six in ten adults (60%) say their financial planning needs improvement, a large majority are not seeking professional help. Two thirds of Americans donât have a long-term financial plan and 71% do not have a financial advisor.

According to the study, the majority (70%) of American adults feel that the economy will experience future crises, and that they need a financial plan to help them weather the ups-and-downs (52%). But only two in five agree their financial plan can withstand market cycles.

the majority (70%) of American adults feel that the economy will experience future crises, and that they need a financial plan to help them weather the ups-and-downs (52%)

Who Uses Financial Advisorsâ¨According to the study, roughly three in ten U.S. adults choose to work with a financial advisor. A closer look at them reveals: