Race In The Workplace

Understanding the demographics, challenges and mismatches of todayâs employment landscape

A new study from McKinsey, Race in the workplace: The Black experience in the US private sector, reveals that ‘advancing racial equity in the workplace is a system-level challenge.â The full report can be accessed here. 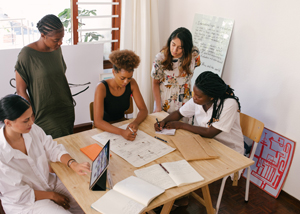 February 21, 2021 â Advancing racial equity in the workplace is a system-level challengeâranging from the structural inequities of geography to underrepresentation in industries and jobs that could create additional opportunity to the behaviors of the workplace itself.

This report explores Black workers in the private sector in three parts: first, their participation in the entire US private-sector economy; second, their representation, advancement, and experience in companies; and third, a path forward that includes the key challenges to address, actions companies can take, and additional actions for a wider set of stakeholders to accelerate progress on diversity, equity, and inclusion (DE&I).

In the United States, Black workers account for 15 million, or 12 percent, of the 125 million US private-sector workers. The overall Black labor force, including the entire private sector, public sector, and the unemployed looking for work is 20.6 million. Our analysis of economic data, primarily drawn from the Bureau of Labor Statistics and the US Census Bureau from 2019, as well as the Equal Employment Opportunity Commission from 2018, reinforces the immense complexity of the challenge facing many of the Black private-sector workers today.

The Black labor force is concentrated in states in the South

Almost 60 percent of the Black labor force (11.8 million people) is concentrated in the South, compared with just one-third of the rest of private-sector workers. As a result, companies located in states with low Black populationsâfor example, much of the West and parts of the Midwest and Northeastâwill need to think differently about how they effectively attract Black talent.

About 60 percent of the Black labor force live in ten states, mostly concentrated in the South.

Overall, Black workers are not located in the places where current job opportunities are and where job growth will likely rise the fastest through 2030. For example, fewer than one in ten Black workers is located in the fastest-growing cities and counties (such as Provo, Utah). Instead, they overwhelmingly live in places where job growth will range from low to above average, with the bright spots being in megacities (such as Chicago) and urban periphery (such as Clayton County, Georgia). For the growth to be inclusive in these areas, workers need to be connected to the opportunities being created (for example, transportation between Black neighborhoods and job locations) and have the right skills for in-demand jobs.

Almost half of Black workers are in three industries with a large frontline presence, with significant underrepresentation especially in high-growth, high-wage industries

Our analysis found that 45 percent of Black private-sector workers (approximately 6.7 million people) work in three industries that have a large frontline-service presence: healthcare, retail, and accommodation and food service. These industries also have some of the highest shares of workers making less than $30,000. In retail, 73 percent of Black workers fall into this category; in accommodations and food service, that share is 84 percent.

Conversely, Black workers are underrepresented in industries such as information technology, professional services, and financial servicesâall sectors that typically have relatively higher wages and job growth.

Fewer than one in ten Black workers is located in the fastest-growing cities and counties.

More Black workers are in jobs with less opportunity for advancement

More Black private-sector workers, 43 percent, make less than $30,000 per year, compared with 29 percent of the rest of private-sector employees. In addition, Black workers tend to be in the industries with the largest frontline labor forces. Three in five Black workers work in frontline jobs such as service workers, laborers, operatives, and office and clerical workers.

Black workers are at higher risk of disruption from automation

Automation will prove disruptive to the labor force in the years to come, but its impact wonât be evenly distributed. For example, one-third of Black workers are in occupational groups such as production work, food service, and office support, which are at heightened risk of losing their jobs to automation. One encouraging trend: health aides is the occupational group with the highest expected job growth through 2030, and these occupations are disproportionately filled by Black workers.

Black workers face higher hurdles to gainful employment than do the rest of the labor force, creating stark disparities. For example, the employment rate for Black workers with some college or an associateâs degree are similar to the total population of workers who have a high-school diploma.

According to our analysis, companies have successfully hired Black employees into frontline and entry-level jobs, but there is a significant drop-off in representation at management levels. In the reportâs participating companies, Black employees make up 14 percent of all employees, compared with 12 percent for the US private sector overall. At the managerial level, the Black share of the workforce declines to 7 percent. Across the senior manager, VP, and SVP levels, Black representation holds steady at 4 to 5 percent.

Variability in representation across companies

Variability in representation among the companies in our participating company data set suggests reasons to be optimistic. Although no company has solved the challenge of increasing Black representation at all job levels, many have made significant inroads at specific points in the pipeline. Their successes could hold the key to more favorable outcomes across the private sector.

On the current trajectory, it will take about 95 years for Black employees to reach talent parity (or 12 percent representation) across all levels in the private sector. Addressing the major barriers that hold back the advancement of Black employees could cut that duration to about 25 years.

Achieving equity for Black workers in the private sector is a structural and multivariate challenge that cuts across many facets of geography, industry, and occupations, as well as advancement and inclusion in the workplace.

Truly making progress will require more than addressing corporate policies; it calls for system-level change, an examination of our broader society, and active collaboration among companies and other stakeholders.

While the challenges are daunting, our research found some bright spots that companies can build on. Trends for both Black representation in the private sector and the promotion rates for Black men and women have shown improvement. High representation in faster-growing and higher-paying industries for Black workers, such as transportation, could present opportunities in the coming years. Nine in ten Black employees believe they are helping their company succeed and that their work gives them a sense of purpose and accomplishment. In addition, our research uncovered pockets of progress on DE&I programs and representation in different companies, which provides the potential for shared learning of best practices across companies.

On the current trajectory, it will take about 95 years for Black employees to reach talent parity (or 12 percent representation) across all levels in the private sector.

Companies can take a number of actions immediately to address their own workforce and culture. Our research, as well as findings by others, suggest the following no-regrets moves.

Beyond actions by individual companies, a more concerted effort may be required. Companies should consider the following efforts to build broader momentum for effecting system-level change.

The Racial Equity Institute writes, âOur systems, institutions, and outcomes emanate from the racial hierarchy, on which the United States was built. In other words, we have a âgroundwaterâ problem, and we need âgroundwaterâ solutions.â

Companies have an important role to playâalong with other stakeholders. It is our hope that this paper helps to inform the conversation on the path forward. We plan to continue to contribute and be part of this journey.

Read the full report, with graphic illustrations and references, here.

The research in this report was conducted in collaboration with Walmart, the W.K. Kellogg Foundation, PolicyLink, and McKinseyâs Institute for Black Economic Mobility, with video production by Osato Dixon and editorial by Leff Communications.

Bryan Hancock is a partner in McKinseyâs Washington, DC, office; Monne Williams is a partner in the Atlanta office; James Manyika and Lareina Yee are senior partners in the San Francisco office; and Jackie Wong is a consultant in the Philadelphia office.