The Greening Of Asset Management

The Push For Responsible Investing

From the United Nations to nations and states, regulators and representatives are aligning with climate risk and social responsibility

Excerpts from a recent article in Bestâs Review, authored by Meg Green and John Weber, look at the emergence of ESG Investing and how it is shaping industries globally. Access the full story here.

The insurance industry controls trillions of dollars of assets, mostly invested in low-profile, stable monetary vehicles that fly under the radar. But these investments now are attracting greater scrutiny related to their impact on environmental, social and governance issues.

The so-called ESG movementâwhich involves regulators, social and environmental activists, and even the broader publicâis shaping industries across the world. Asset management, banking, venture capital, energy and manufacturing businesses have joined insurers working to balance financial needs with all three aspects of ESG.

Job No. 1 for insurers is to maintain sufficient financial strength to satisfy obligations to policyholders. In other words, they need enough available capital to pay claims. Insurers traditionally have sought investments that offer sufficient returns and appropriate risks. For centuries, those investments included energy, carbon-based fuels, weapons, tobacco and industries now associated with human rights concerns or other sensitive issues.

Many insurers have begun altering their investment practices to avoid areas that have fallen out of favor in recent years, but a growing body of regulators, legislators, activists and other stakeholders is applying significant pressure to incorporate ESG in all areas of the business.

Many insurers see their choice of investments as a key element in meeting ESG standards. Political changes are amplifying that focus, said Sean Kevelighan, president and chief executive officer of the Insurance Information Institute.

Most of insurers’ revenue comes from investments, which can be a great tool for building communities, Kevelighan said. âYou are beginning to see companies proactively look at their portfolios and see whether or not there are ways they can address the issues through their investments,â he said. âYou’re also seeing companies find ways to help their customers with the risks that are increasing too, beyond just our own investments.â

The industry has reached an important inflection point where it is going from a detect-and-repair focus to one of predicting and preventing catastrophes, Kevelighan said. Investments play a decisive role in that approach, as does being part of the broader conversation around ESG, he added.

âWe’re seeing, with the new administration coming into Washington, that climate is part of virtually everything in that administration. Being part of those discussions, making sure people understand how insurance can be a solutions provider, making sure that people understand what risk-based pricing is and why it matters so much. It’s a lot for us to do in the climate area, even above and beyond investments,â Kevelighan said.

Insurers soon will be subject to broader regulatory pressures, according to David Sampson, president and CEO of the American Property Casualty Insurance Association.

âI think there will be a whole raft of new regulations on ESG-related issues coming from the Securities and Exchange Commission, the Fed, and other regulators on public companies,â said Sampson. âAll of that’s going to have an impact on what happens at the state level among regulators, that is likely to sweep in nonpublic companies, mutual companies and other forms of insurance organizations.â

For those that follow the science and understand that climate change is real and it's having an impact on our environment and therefore on humans, then I think someone could recognize that these issues will have an impact on investment returns as well... 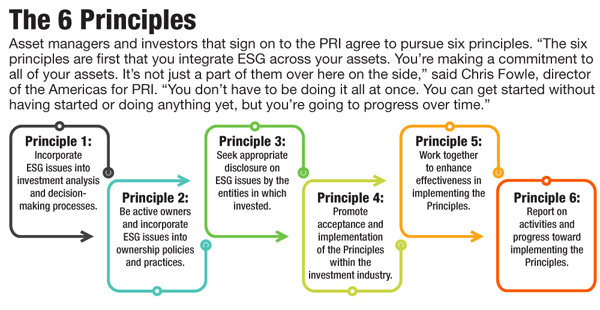 A major driver of the increasing emphasis on insurers’ investments is Principles for Responsible Investment, the organization that describes itself as a United Nations-affiliated international network of investors working together to implement its six aspirational principles. PRI began operating in 2006.

It was incubated within the U.N. as a grad student project during Kofi Annan’s tenure as secretary-general. It later was spun into a standalone nonprofit with headquarters in London. The U.N. supports PRI via two advisory board seats. âOtherwise we’re completely independent from the U.N.,â said Chris Fowle, director of the Americas for PRI. âThere are no budgetary connections or administrative connections.

âFor those that follow the science and understand that climate change is real and it’s having an impact on our environment and therefore on humans, then I think someone could recognize that these issues will have an impact on investment returns as well,â Fowle said. âIn many markets around the world, that recognition sort of transcends politics. There are really important sectors that are impacted by climate change, by enhanced recognition of environmental factors, in fact, affecting valuations.â

A Matter of Survival

Pressures on insurance investment managers are more than conceptual. Companies need to make a solid return on equity and move to a broader asset allocation, into some nontraditional, more-value-based strategies and away from some of the core fixed income that has been a stalwart of the industry for decades, according to one insurance investment veteran.

âThere will be pressure on the ESG side, but I think the primary pressure moving insurance investment allocations is the need for profitability and survival,â said Stewart Foley, founder of Insurance AUM and editor-in-chief of the Insurance AUM Journal. âYou’ve seen major insurance companies sell their life books because, given their regulatory environment, they can’t fund it. Those blocks of business are going to folks who have a less-restricted, broader opportunity set for investments.â

PRI principles allow for latitude in terms of execution and timing, Fowle said.

âThink of us as a framework and a set of principles that allow investors to think through how they approach ESG,â Fowle said. âWe’ll never be prescriptive and say ‘You can invest in this, and you can’t invest in that.’ There really isn’t anything that’s PRI-compliant per se. More broadly speaking, there’s been a lot of research around material ESG factors and whether or not they have an impact on valuations.â

In particular there is good academic evidence, he said, that shows companies that take ESG or sustainability issues into account perform better financially. Public equities, for example. Depending on an investor’s strategy and process, they may be able to achieve outsize returns if it recognizes those factors and chooses companies that are doing better on sustainability issues.