Do Public Workers Without Social Security Get Comparable Benefits? 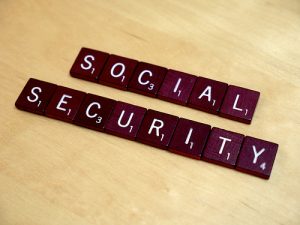 The Center for Retirement Research at Boston College has released a new brief examining the benefits that public workers without access to Social Security receive. The research, Do Public Workers Without Social Security Get Comparable Benefits?, found that these plans do provide their non-covered employees with benefits equivalent to Social Security, but that the lifetime benefits are lacking for some members. To fix this gap, CRR recommends updating Safe Harbor provisions or requiring that all public employees are covered by Social Security.

One of the conclusions: “We find that state and local plans do adhere to the standards and provide equivalent benefits at the full retirement age. However, the standards ignore differences between public pensions and Social Security in key provisions that drive lifetime resource levels. Accounting for those differences, a wealth-based generosity test suggests that 43 percent of public pension plans fall short of Social Security for a significant minority of noncovered new hires. Equally important, a few plans could exhaust their trust funds within about 10 years, putting beneficiaries at risk.”

Excerpt From the Study:

One-quarter of state and local government employees â approximately 6.5 million workers â are not covered by Social Security on their current job. To remain outside of Social Security, federal law requires that these employees be covered by an employer pension of sufficient generosity. Since many public pensions have grown less generous in recent years and a few plans could exhaust their assets, the question is whether state and local plans currently satisfy the federal standards.

This brief, which is based on a recent study, attempts to answer that question. The first step is to determine whether the retirement plans for noncovered state and local employees satisfy the âletter of the law.â Specifically, do they meet the IRS âSafe Harborâ parameters, and do these parameters provide income equivalent to Social Security at age 67? Even if the plans meet these requirements, however, noncovered state and local employees still may not receive Social Security-equivalent resources because they face long vesting periods and may not get full cost-of-living benefits earlier than under Social Security. Thus, the second step requires incorporating vesting, the COLA, and retirement ages to produce lifetime retirement wealth. The final step involves addressing the additional complication caused by low funded ratios in a number of pensions for noncovered state and local employees.

The Social Security Act of 1935 excluded state and local employees from coverage because of constitutional ambiguity over the federal governmentâs authority to impose payroll taxes on public employers and because these employees were already covered by defined benefit pensions. Beginning in the 1950s, a series of amendments allowed government employers to enroll certain employees in Social Security, so that by 1991 most state and local employees were covered by the program. Today, public employees are permitted to remain outside of Social Security if their employer plan meets the IRS Employment Tax Regulations for sufficiently generous benefits.

To meet the generosity standard, a plan must provide members with a benefit for life of equal value to the Primary Insurance Amount that members would have received had they participated in Social Security. The benefit must start on or before Social Securityâs full retirement age (FRA), which was traditionally 65 but is now 67 for nearly all workers. To help public plans determine whether they are in compliance, the government has established Safe Harbor provisions. 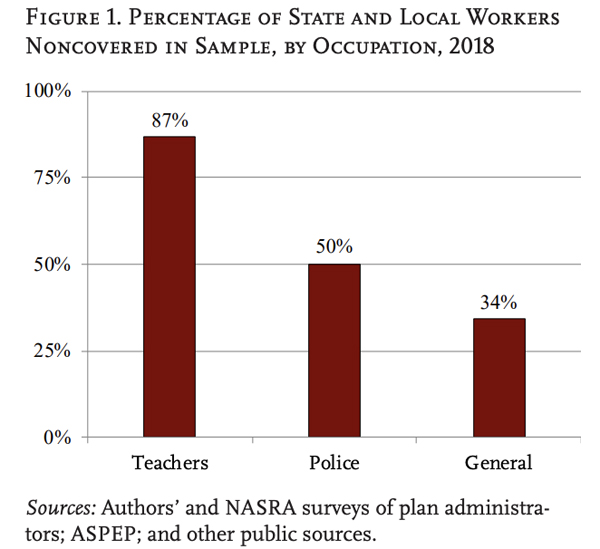 To assess whether retirement benefits for noncovered new hires meet the Safe Harbor requirements, we gathered data on Social Security coverage from surveys of plan administrators and detailed benefit data from state and local plansâ actuarial valuation reports. Coverage in the states that we surveyed varies significantly by type of employment. While most teachers in these states lack Social Security coverage, only a third of general employees are not covered

Our survey produced information on both normal retirement ages (NRAs) and benefit structures for new hires in plans with noncovered workers. Although a couple of plans have set NRA older than the Safe Harbor benchmark of 65, no plan exceeds the current Social Security FRA and many allow for normal retirement at substantially younger ages, with a median age of 62. Similarly, the benefit structure is typically more generous than required by law.

We find that state and local plans do adhere to the standards and provide equivalent benefits at the full retirement age. However, the standards ignore differences between public pensions and Social Security in key provisions that drive lifetime resource levels...

For example, among plans with a three-year final average salary period, the median benefit factor is 3.0 percent, whereas the Safe Harbor formula only requires 1.5 percent. In short, the benefits earned by noncovered state and local new hires appear to satisfy the Safe Harbor requirements

Do the Safe Harbor Designs Work?

The second question is whether the Safe Harbor parameters themselves satisfy the guidance that retirement benefits at age 67 should be equivalent to the Social Security Primary Insurance Amount. To answer the question, we compare two scenarios:

2) the Social Security benefit that this same worker would have received had they spent a whole career in covered employment.

In the calculations, the Safe Harbor-compliant plan offers a 1.5-percent benefit factor, a 3-year final average salary, an NRA of 65, and no COLA. Because Safe Harbor regulations do not stipulate a vesting requirement, we assume immediate vesting.

Do Noncovered Workers Get the Same Lifetime Benefits?

Although the plans for noncovered public employees satisfy the Safe Harbor requirements and the Safe Harbor achieves the goal of the Employment Tax Regulations, it is still not clear that the noncovered employees enjoy Social Security-equivalent resources throughout retirement. Public pensions and Social Security differ in important ways that affect lifetime retirement resources. On the negative side, state and local plans often set very long vesting periods and are increasingly unlikely to grant full COLAs after retirement. On the positive side, they allow members to collect full benefits at much younger ages than Social Security.

Incorporating these factors into the generosity test requires a conceptual transition from age-67 benefits to lifetime retirement wealth. Specifically, the new standard uses the following ratio: