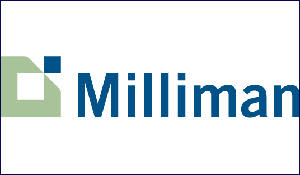 In Q1 2017, the funded ratio of these plans regained ground lost at the end of last year, climbing from 70.1% at the end of December to 72.0% as of March 31, 2017. These plans saw their funded status improve by $78 billion for the quarter, the result of strong investment returns (measuring 4.29% in aggregate) that led public plan asset growth to outpace the rise in pension liabilities.

“Thanks to robust market performance in Q1, the funded ratios for our Milliman 100 plans improved across the board, with five additional pensions crossing the 90% funded mark,” said Becky Sielman, author of Milliman’s PPFI. “And while quarterly investment returns dwarfed those of Q4, the wide range in performanceâfrom a low of 2.12% to a high of 5.06%–highlights the challenge that lies ahead for many poorly funded plans.”

About Milliman â¨Milliman is among the world’s largest providers of actuarial and related products and services.

The firm has consulting practices in healthcare, property & casualty insurance, life insurance and financial services, and employee benefits. Founded in 1947, Milliman is an independent firm with offices in major cities around the globe.