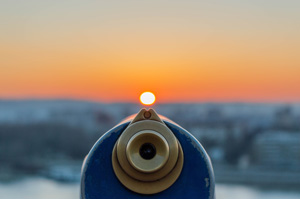 WINDSOR, Conn., Aug. 20, 2020âThere is a growing divergence in consumer perceptions about the economy and COVID-19 based on ideology, according to the latest results of LIMRAâs Consumer Sentiment Survey.

When it comes to the economy, consumers are similarly split along political lines. Sixty-eight percent of consumers who identify as liberal continue to be highly concerned about the economy while just 44% of conservatives show this level of concern.

âOur study revealed a drastic difference in consumer perceptions about the economy and the pandemic, based on whether they are liberal or conservative,â said Alison Salka, senior vice president and head of LIMRA Research. âThis political polarization exists throughout the country and suggests that businesses, policymakers and legislators will find it difficult to make decisions that will be widely accepted by all Americans.â

Worries about the financial impact of COVID-19 and the recession have declined since March but still remain high. Four in 10 consumers report the economic downturn has impacted their discretionary spending and their ability to save for retirement, for a major expense, or toward an emergency fund. In March, half of consumers said a recession would negatively affect these things. 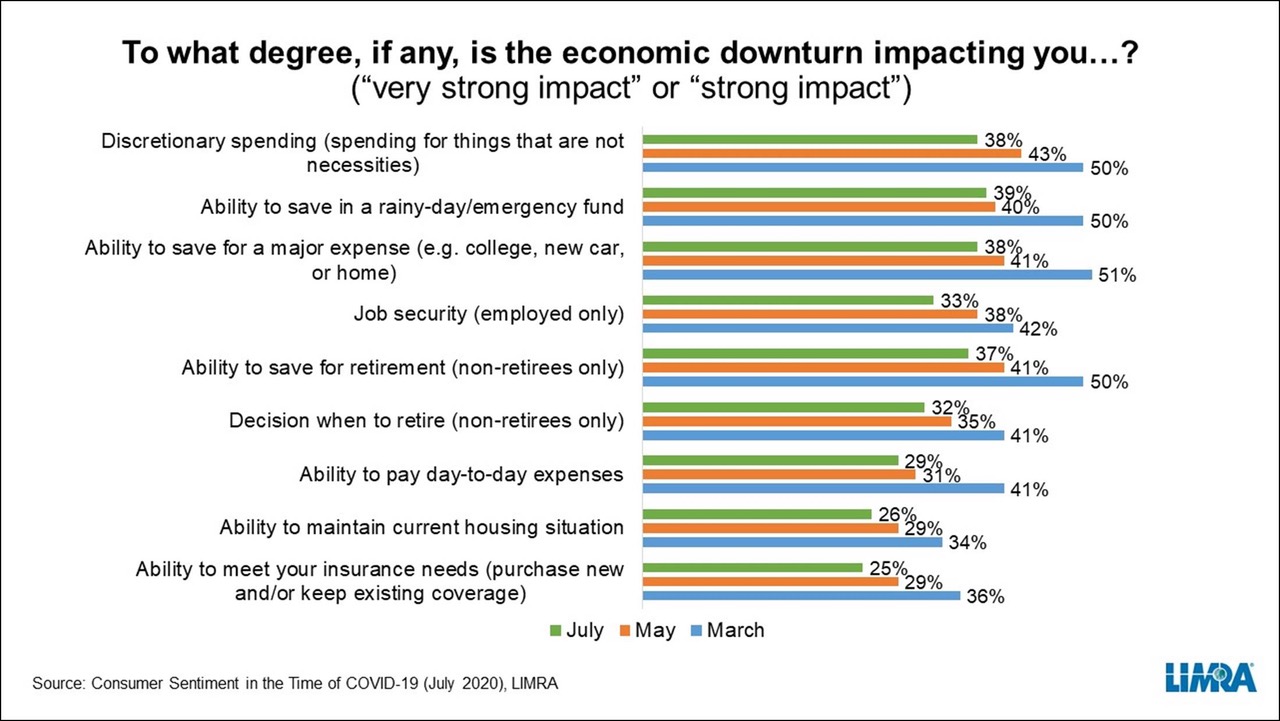 The July survey finds more consumers are feeling better about their job security and their ability to pay their day-to-day expenses than they did in March. In July, just 33% of employed consumers said they were worried about their job security, compared with 42% of workers who were worried in March. While 3 in 10 consumers said they continue to be worried about being able to pay for their day-to-day expenses in July, this is down from 41% in March.

âWhen much of the country shut down in March and we faced many unknowns about the severity of the pandemicâs impact, it was not surprising more people worried how the economic fallout would impact their own finances,â said Salka. âAfter five months, consumers have a better sense of how disruptive COVID-19 and the resulting recession will be on their personal finances so they have greater confidence in their ability to pay their bills, save for retirement and meet other financial goals.â

Awareness of the Need for Life Insurance Grows

As consumers better understand how the pandemic and the precipitous and record-breaking drop in the economy would impact them personally, we see more people becoming more confident that they will be able pay for life insurance during this recession...

Purchasing or paying for existing coverage remains a concern for many Americans. Almost half of consumers (47%) say the recession is impacting their ability to buy or pay for insurance in general. However, this is down from 58% in March. Concern about the ability to buy or pay for life insurance has dropped as well. In July, just 16% of consumers said the recession would make it more difficult to purchase life insurance coverage, compared with 24% in March. One in five (19%) owners said they believed it would be more difficult to pay for their existing life insurance policies in July, down from 33% in March.

âAs consumers better understand how the pandemic and the precipitous and record-breaking drop in the economy would impact them personally, we see more people becoming more confident that they will be able pay for life insurance during this recession,â noted Salka. âOur research shows that 46% of Americans donât have life insurance coverage at all and even more donât have adequate coverage. If there is one silver lining with regard to COVID-19, perhaps it is bringing greater attention about the important role life insurance plays in protecting familiesâ financial security when the unexpected occurs.â

Methodology
First initiated in early 2008 to gauge consumer opinion of the economy and the financial services industry, LIMRAâs Consumer Sentiment Survey has continued to monitor Americans’ sentiment about the economy and confidence in industries. The latest results are based on responses from 2,000 Americans ages 18+, weighted to the U.S. general population. The most recent survey was fielded July 22-23.

About LIMRAÂ®
Serving the industry since 1916, LIMRA helps to advance the financial services industry by empowering nearly 700 financial services companies in 53 countries with knowledge, insights, connections, and solutions. Visit LIMRA at www.limra.com.