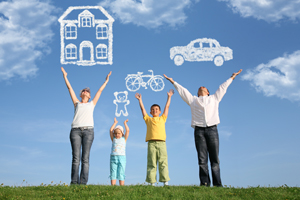 PARK RIDGE, Ill., June 6, 2017 /PRNewswire/ — About half of Americans (47 percent) say if they were to lose their primary source of income tomorrow, they could only maintain their current lifestyle for three months or less.

A new study commissioned by the Million Dollar Round Table (MDRT) â conducted online by Harris Poll among over 2,000 U.S. adults ages 18 and older â finds that many Americans, even those considered financially successful, do not account for unexpected risks during financial planning.

Planning for the unknown

It appears that many American households are unprepared in the event of something unexpected happening to a family member, thus losing a primary source of income.

A majority of Americans (61 percent) say their family would assume debt if they passed away tomorrow, with 38 percent of U.S. adults saying the debt would be $10,000 or more. Additionally, only half of Americans (50 percent) have life insurance. Of those who have any dependents, 47 percent say their dependents would run out of money without their personal income in two years or less if they were to pass away tomorrow.

“While these families with a steady source of income may seem prepared, they are jeopardizing it all by not having the right protection to ensure future financial security for themselves and their families,” said Mark J. Hanna, CLU, ChFC, MDRT President.

Americans are also not taking in to account the possibility of disability or illness while planning for their financial future. One in 20 Americans (five percent) are unemployed and unable to work because of disability or illness, but only 20 percent of U.S. adults have either short-term and/or long-term disability insurance. Of those Americans who do have disability insurance, only 39 percent believe it would be enough to cover their long-term care and medical expenses if they were to have an accident.

Even financially successful families do not anticipate financial risks

On average, Americans say their household has two sources of income, with 40 percent having income of $74,000 or more.

“It’s not just lower income Americans who are vulnerable to financial strain in the event of a life-altering incident; families considered financially successful are also at risk,” added Hanna. “A financial professional can help identify potential risks and work with you to set up a plan that protects your family from these pitfalls.”

Of the Americans surveyed:

Saving for the climbing cost of college

College expenses are rising faster than inflation, yet only 36 percent of parents with children under the age of 18 in their household are saving for their children’s college education. Lack of college savings may be a result of many Americans still working to pay off their own student loan debt. According to the Quarterly Report on Household Credit and Debt from the Federal Reserve Bank of New York, Americans currently owe $1.31 trillion in student loan debt.1

Survey methodology
This survey was conducted online within the United States by Harris Poll on behalf of MDRT January 9â11, 2017, among 2,192 adults ages 18 and older. This online survey is not based on a probability sample and therefore no estimate of theoretical sampling error can be calculated. For complete survey methodology, please contact Tori Unger at tunger@gscommunications.com.

About MDRT
This year, MDRT celebrates its 90th year of delivering innovative ideas and generating empowered growth. Founded in 1927, the Million Dollar Round Table (MDRT), The Premier Association of Financial ProfessionalsÂ®, is a global, independent association of more than 49,500 of the world’s leading life insurance and financial services professionals from more than 500 companies in 70 nations and territories. MDRT members demonstrate exceptional professional knowledge, strict ethical conduct and outstanding client service. MDRT membership is recognized internationally as the standard of excellence in the life insurance and financial services business. For more information, please visit mdrt.org and follow them on Twitter @MDRtweet.