A Movement toward Retirement Income Culture 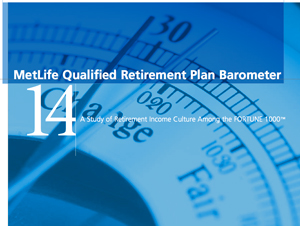 âSince the advent of the modern DC plan, plan sponsors have focused on how effectively the plan provided choice and flexibility to participants in investment selections. The shift toward simplicity is a potentially significant change in how plan sponsors view their role,â said Cynthia Mallett, vice president, Industry Strategies & Public Policy for MetLifeâs Corporate Benefit Funding group. âThis new perspective may signal a movement to a more balanced division of responsibility in DC plans, which is in line with DC planâs emerging role as the primary retirement plan chassis of the future.â

The Barometer was created by MetLife to assess whether and to what extent a new culture is taking hold among plans sponsors at FORTUNE 1000TM companies â one which places equal emphasis on retirement savings and retirement income. The higher the value on the Barometer, the stronger the overall culture of retirement income. While the high score of 89 remains the same from the inaugural study in 2011, the range of scores has narrowed significantly, driven by improvement in the lowest scores, rising from 19 to 30.

A shift toward simplicity

âDC-only plan sponsors are taking a serious look at lifetime income. According to the QRPB, over half (57%) of DC-only plan sponsors who do not include an income annuity have discussed this option with their record keeper,â noted David DeGeorge, vice president, Life & Income Funding Solutions, MetLife. âOver a third, 34%, have explored lifetime income solutions available in the marketplace and 11% have already conducted due diligence about the providers of these solutions.â

While the high score of 89 remains the same from the inaugural study in 2011, the range of scores has narrowed significantly, driven by improvement in the lowest scores, rising from 19 to 30

Also highlighted in this yearâs QRPB are the differences in attitudes and practices among companies that offer only a DC plan, and those who provide a broad coverage DB plan combined with a DC plan. The Barometer score across all plan types was 58 out of a possible 100âcompanies that offer broad access to DB and DC plans outpace their peers with a Barometer score of 71, indicating a much stronger retirement income culture.

âBased on the QRPBâs findings, companies considering restructuring their qualified plans to a DC-only format could benefit from applying the retirement income mindset of a DB plan to the new DC plan framework,â commented Mallett. âOne way to do this is through communicationâcompanies that offer broad coverage DB plans and DC plans appear to be more likely to communicate about retirement income during employeesâ entire careers, with 72% doing so compared to 52% of their DC-only peers.â

The study also found that DC-only plan sponsors are more than twice as likely to believe that their workers will reach retirement age with inadequate savings to generate sufficient retirement income, with 58% agreeing with this statement compared to 28% of those companies offering broad coverage DB plans and DC plans.

To learn more about companiesâ evolving retirement benefits philosophies and steps plan sponsors can take to move toward a culture focused on retirement income, access the 2014 MetLife Qualified Retirement Plan Barometer at metlife.com/Barometer2014.

Research Methodology
Matthew Greenwald & Associates and Asset International, Inc., publisher of PLANSPONSOR and PLANADVISER magazines, conducted the online survey of Fortune 1000TM companies on behalf of MetLife. To be eligible for the study, participants needed to work for a Fortune 1000 company that offers at least one DC or DB plan (including cash balance/hybrid plans). Participants also had to have at least a moderate amount of influence over decisions regarding their companyâs retirement benefits policy and plan design.